Hernandez was a Phoenix police officer. He posted anti-Muslim memes to his personal Facebook page, which apparently was open to the public. Unusually, the court opinion displays four of Hernandez’s meme posts so we can see exactly what he posted. (Yay for the court showing the evidence!). With some trepidation, I’m going to reshare the four posts, despite the fact they contain offensive content that I condemn. To me, collectively the four posts demonstrate Hernandez’s discriminatory mindset so clearly that I don’t see how Muslims in Phoenix could trust they would get fair treatment from Hernandez. 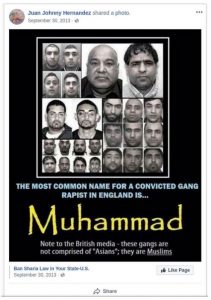 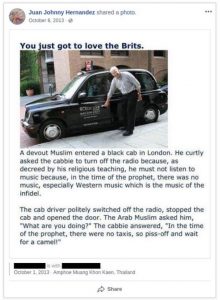 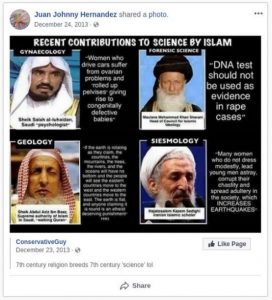 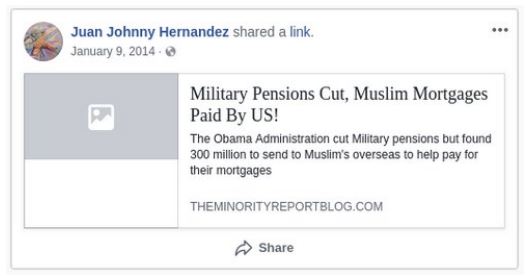 In 2019, the Plain View Project publicized Hernandez’s posts. (See my prior blog post on the Plain View Project). An internal investigation concluded that Hernandez’s posts “potentially reduced or contributed to the erosion of public
trust, were inflammatory to certain groups, and/or created dissention in the community by promoting hate, violence, racism, bias, or beliefs inconsistent with the Phoenix Police Department’s Purpose Statement and Guiding Values [and] do not align with the distinguishing features, essential functions and required knowledge as outlined in the City of Phoenix classification for a Police Sergeant.” To avoid discipline, Hernandez sued the department for First Amendment violations. The district court ruled for the department.

In further support of the court’s belief that the memes addressed matters of public concern:

Hernandez posted each of the items at issue on his own time, outside the workplace, using his personal Facebook profile. The intended audience of his posts was not limited to Hernandez’s fellow employees, and the posts could be viewed by any member of the general public. We agree with the Fourth Circuit that “publicly posting on social media suggests an intent to ‘communicate to the public or to advance a political or social point of view beyond the employment context.’” The context in which Hernandez’s posts were made also supports the conclusion that the posts were not tied to any workplace dispute or grievance. The exhibits attached to Hernandez’s complaint suggest that issues relating to immigration and cultural assimilation were topics of media attention at the time, and Hernandez alleges that he posted the items in question to foster discussion on those topics.

So far, I agree with much of the court’s points. However, I cannot get over how Hernandez engaged in these topics in a blatantly anti-Muslim fashion. The court says the Supreme Court in Snyder v. Phelps held that:

overtly hateful speech denigrating gay men as a means of protesting the United States’ tolerance of ‘homosexuality in the military’ qualified as speech on a matter of public concern. Speech that expresses hostility toward racial or religious minorities may be of particularly low First Amendment value at the next step of the Pickering balancing test (as we note below), but its distasteful character alone does not strip it of all First Amendment protection.

Because the district court ended the opinion without completing the Pickering balancing test, the court remands the case for the district court to finish the test. The panel doesn’t make this mandate neutrally; it says “it seems likely that Hernandez’s posts could impede the performance of his job duties and interfere with the Phoenix Police Department’s ability to effectively carry out its mission….we do not mean to suggest that the Department will face a particularly onerous burden to justify disciplining Hernandez for his posts, given the comparatively low value of his speech.” Again I agree generally, but not with the implicit bothsiderism. Comparatively low value–or no value? The only value of Hernandez’s speech I see was that it exposed his mindset publicly so Phoenix residents/taxpayers could better understand how their policing function works. (And remember we get this insight only because of the Plain View Project).

So it seems likely that Hernandez will lose on remand, but only after the Ninth Circuit make the Pickering analysis harder in this and future cases by defining “matters of public concern” to include racist views.

[NB: the “matter of public concern” phrase appears elsewhere in the law, such as anti-SLAPP laws, where I favor capacious interpretations of the term. But it never would have occurred to me that the phrase would reach racist views.]

UPDATE: For a similar analysis, see Carroll v. City of Jefferson, 2022 WL 3141860 (E.D. Tex. Aug. 5, 2022). Another cop who posted racist/#MAGA-themed memes to Facebook and then lost his job. (How many of these cases are we going to see?) The court says the memes addressed matters of public concern, but they did not survive the Pickering test, so he is out.]