Plaintiff was a case manager at Communities in Schools of San Antonio. She was aware that an individual was subject to a protective order that prohibited contact with a student, and this person allegedly violated the no-contact order. She reported the possible violation to the police. The police went to the student’s house. According to plaintiff, the police took no action because there was no protective order in place. Plaintiff, whose husband was a police officer, took to Facebook to complain about the conduct of the officers: 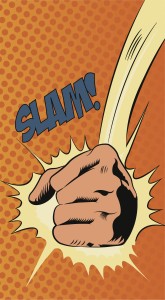 I Love and Respect the fact that my husband is a fine San Antonio Police Officer, and I respect, and am Grateful for, every HARD working S.A. Police officer…but lazy ass, mother-effers on B-shift who don’t care to do their jobs the way they’re supposed to …even when being half assed about things means putting/leaving a child in danger…need to get the Fuck off the force! Yeah, I said it!

Following the post, she and her husband allege that they received unspecified “threats” and that a copy of the post was displayed at the station where her husband worked. Some time later, a couple of officers allegedly approached a school where plaintiff worked and asked to speak with her through the principal. According to plaintiff, the officers told the principal that plaintiff should be disciplined for posting the message, and the school’s failure to do so would “endanger relations” between the police department and the high school. The officers also said that plaintiff should apologize.

Shortly thereafter, plaintiff was terminated. She filed an internal affairs complaint against the officers and protested that the chief did nothing to discipline the officers, despite knowing about their visit to the high school. She sued the police department, chief, and the two officers, alleging First, Fourth, and Fourteenth Amendment violations.

The court dismisses the department because it is not the type of entity subject to 1983 suits, and it dismisses the chief because he did not personally participate and any constitutional violations were not a result of any policy or practice he implemented.

With respect to the individual officers, the Fourth and Fourteenth Amendment claims failed because there were not adequate allegations underlying the claims (i.e., the facts were too flimsy). However, the court declines to dismiss the First Amendment claim. The court says that between her allegation that the officers requested she take down the message, and the request to her boss that she be disciplined (and apologize), she has enough to proceed with her retaliation claim. The officer who asked that she be disciplined argued that she had a First Amendment right to respond to plaintiff’s criticism, but the court says the fact that the officer’s counter-speech was possibly accompanied by the use of “direct or implied threats or coercive language” distinguishes this case.

An interesting twist on the “can you be fired as an employee for something you post online?” question. It looks like her employer is a non-profit and not a public entity. As such, it probably has greater leeway in terminating its employees for errant Facebook posts. The legal issues would have been more complicated if she was a public employee.

As the court notes, the officer certainly has a right to respond to criticism. This just reaffirms the “remedy for bad speech is more speech” principle. But, since they are carrying around guns and badges, it’s possible that their exhortations could have crossed the line from mere lobbying to coercion. It may not be easy to prove the underlying case, but to the extent police officers use their power to coerce someone into taking down speech or pressure their employer into firing them for the speech, this is beyond the pale, and certainly sounds like a violation of the First Amendment.

In the meantime, the usual caveat applies: be careful of what you post online, particularly if you are taking to Facebook to vent about your workplace problems!

← No One Owns The Number ‘3.95%’ (We Think)–Banxcorp v. Costco (Forbes Cross-Post)
“Does the U.S. Patent System Stifle Innovation” Notes →
Subscribe to Blog via Email
Categories