January 2, 2016 · by Venkat Balasubramani · in Privacy/Security 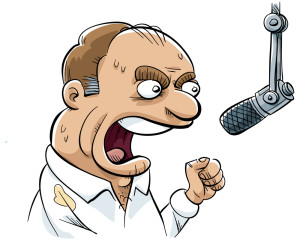 shutterstock/blambca – an angry radio dj rants into his microphone

Martinez worked at Yours Truly Consignment Shoppe. One of her co-workers was fired (along with another person) and posted the news on Facebook, adding how she hated working at Yours Truly for some time now. Martinez “liked” this post and posted comments:

She did both of y’all wrong.

These posts were made by Martinez during lunch break (while on premises), in close proximity to the general manager and owner. Someone passed along Martinez’s comments to the owner, who expressed her belief that Martinez acted improperly. Martinez then deleted the second comment.

After she got home, Martinez found that the owner had deleted and blocked her as a friend (on Facebook). She posted the following to Facebook.

my oh my. there’s a reason I don’t post my opinions on here, today I did. in sake of a friend. someone did not like what I had to say even though it’s MY fb, MY post/comment. I can say what I please. don’t like whatcha see? then scoot. really had to be digging deep to even see it anyways. kinda says a lot. ima stick up for myself & my woes (people I care about), if that makes anyone feel some typa way, unfriend me. won’t phase me one bit. I’ve learned today how rare ‘real’ is. & I appreciate every one of y’all who have kept it real with me from day 1. I’m out . . .

She also texted the owner, saying she “just want[ed] to apologize for the fb comment earlier.”

She was denied unemployment benefits and appealed. The Arkansas appeals court says the statute has three requirements for disqualification of benefits stemming from off-duty conduct: (1) the conduct has to have “nexus” to the work; (2) the conduct has to result in some harm to the employer; and (3) the conduct has to violate an actual policy and done with the intent that the employer’s interests would suffer. The board focused on the Facebook post Martinez made from home in deciding whether an award of benefits was proper, and the court does as well.

The court says that first two elements are satisfied. In particular, the court says that while it’s not crystal clear that the store’s interests would be harmed based on Martinez’s post, reasonable minds could differ. And at this stage in the case, the store’s explanation that Martinez’s Facebook activity would “erode discipline among coworkers” must be credited.

However, the court says that substantial evidence does not support the final element: that Martinez’s posts violated a policy and was done with intent or knowledge that the employer’s interests would suffer. As to the first question, Yours Truly tried to rely on informal policies communicated to employees (that promoted positive attitudes, discouraged gossip, etc.), but the court says these are not sufficient:

Though the [informal policies] prohibit a broad range of conduct, a Facebook status that identifies no one by name and is, under its most incriminating interpretation, an oblique reference to Martinez’s displeasure with a reprimand she received from Montgomery, does not fall within its orbit.

The court also says that the board’s reliance on Martinez’s apology text as proof of her bad intent was misplaced. This does not refer to the longer post and does not evince any actual intent to harm Yours Truly.

The status of employee Facebook comments are best described as quirky. We’ve covered a range of cases ranging from (1) public employee terminations/discipline; (2) private employee terminations; (3) NLRB prohibition on what prohibitions private employers can impose. While private employers have broad leeway in terminating employees for Facebook posts, they have to tread carefully with their policies. And as this case illustrates, the termination may not rise to the level of misconduct that warrants a denial of benefits. This case is not an outlier: another case from Washington (which has a similar statute) came to a similar conclusion.

While not determinative, these cases raise the same premises-based distinction as do the school discipline cases, where courts struggle with determining whether posts made off-campus sufficiently affect school administration such that they should be treated as made on-campus. Here, the court doesn’t seriously debate the nexus question. Posting from home is not a get out of jail free card for the employee.

As always, employees should exercise caution when posting about their workplace!