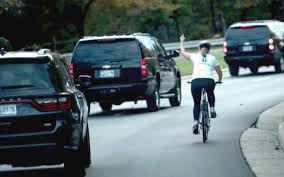 The woman photographed giving the finger to Trump’s motorcade was also fired from her job. Could she get unemployment benefits too?

I just blogged on a case involving Facebook’s suspension of a Bowling Green Massacre gaslighter. Today, I’m blogging about a woman fired for a pro-Trump tweet. It’s pretty clear my blogging queue will be overflowing with Trump-related litigation for years to come. #MALGA (Make American Litigation Great Again).

Kathleen M. Jungclaus was VP of Human Resources for Waverly Heights, a retirement home located in a Philadelphia suburb. On July 24, 2016, she tweeted (from a Twitter account I couldn’t find, so maybe it’s gone):

@realDonaldTrump I am the VP of HR in a comp outside of philly an informal survey of our employees shows 100% AA employees voting Trump!

The employer said “AA” stands for “African-Americans,” which would give this tweet racial dimensions. Jungclaus alleged it stood for “Administrative Assistants.”

What should the employer do about this tweet? Trump was and remains a divisive figure. Philadelphia County voted overwhelmingly for Hillary over Trump, and more suburban Montgomery County (where Waverly Heights is located) still voted 58% for Hillary and 37% for Trump. And if “AA” stood for “African-American,” the tweet becomes even more contentious; Trump has virtually no popularity in the African-American community, which supported Hillary over Trump nationally around 9:1. So having a highly visible corporate officer take a potentially unpopular public stance–and positioning it as the widespread sentiment of coworkers–surely caused some consternation among the Waverly Heights community and Jungclaus’ superiors.

Waverly Heights argued that she violated its social media policy. Yay for them for having a policy at all! It read (in part):

[Employer] has an interest in promoting and protecting its reputation[,] as well as the dignity, respect, and confidentiality of its residents, clients, and employees as depicted in social medial, whether through [Employer’s] own postings or that of others. Towards that end, [Employer] will actively manage the content of its social media sites to uphold the mission and values of the company. Also, [Employer] expects employees who identify themselves with [Employer] in either internal or external social media to conduct themselves according to this policy.

This leaves open the possibility that a broader social media policy could lead to different results. However, a broader social media policy–say, one that restricted divisive political posts regardless of the employee’s self-identification with the employer–would run into other legal problems, such as potential NLRB issues. So perhaps Waverly Heights couldn’t regulate Jungclaus’ tweet; the narrow policy didn’t cover it, and a broader policy might be illegal.

Waverly Heights also claimed she violated its Communications Policy, which says that employees may not “link from a personal blog or social networking site to [Employer’s] internal or external website.” The Twitter follow did not violate this provision, either.

Finally, Waverly Heights claimed that it would have been wrong for her to take a political survey of employees. But, consistent with the modus operandi of Trump enablers, Jungclaus’ claim to have conducted an “informal survey” appears to be alternative facts. Instead, apparently she chatted with a few coworkers, not exactly what I consider a “survey” (Then again, we’re kidding ourselves if we think facts matter to anyone anymore).

WhileWaverly Height’s firing did not disqualify Jungclaus for unemployment benefits, it’s hard to say she’s a winner in this circumstance. First, she still got fired from her job of 20 years. (Though she’s filed a pending discrimination suit over that. #MALGA). Second, history will judge all Trump enablers harshly.

* Nurse Properly Fired and Denied Unemployment Due to Facebook Rant