At what point does a teacher’s Facebook photo cross the line from humorous to inappropriate? Last December, an Idaho panel considered whether a teacher’s semi-racy photo justified the school district terminating her employment. 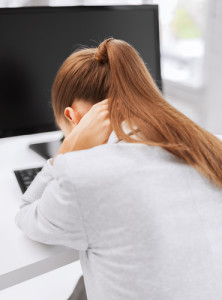 Laraine Cook was a substitute teacher in the Pocatello School District (“PSD”) and the head coach of the Pocatello High School Girls Basketball team. While attending a family reunion in July 2013, she took the photo in controversy with her then-boyfriend—a teacher/football coach also working in the Pocatello school district:

. . . Ms. Cook and the male who accompanied her posed for a photo in their bathing suits while standing in front of a lake. They each had one arm around the other’s waist and the male had his other hand touching Ms. Cook’s breast. There was a third person in the photograph who appears to be ‘photobombing’ the picture.

Cook posted the photo to her Facebook page as part of an album, which was accessible to the public and to the various Pocatello High School students with which she was “friends.” Within 48 hours, Cook removed the photo after getting word from her athletic director that it “was not a good idea to post such a photo.”

Unfortunately for Ms. Cook, the damage was already done.

In October 2013, the school district caught wind of the photo and fired her soon after. The district then reported Cook to the Idaho State Department of Education Professional Standards Commission for “posting a picture of a sexual nature on a social media website.”

In response, Cook filed a grievance with the Pocatello School District Grievance Panel. The panel considered whether the decision to fire Cook was “unfair treatment” or otherwise violated the district’s policy.

Cook Deserved Discipline, But Not Termination

PSD claimed to terminate Cook’s employment for violating a PSD Policy provision prohibiting “immoral” and “indecent” acts. The panel noted that those specific words overstated the conduct, but nonetheless found some catch-all language within the policy that covered Cook’s actions:

PSD Policy 7121 (in relevant part): Any person who fails to continually maintain appropriate conduct, or who acts in a manner contrary to the best interest of the district, may subject himself/herself to corrective disciplinary action, suspension or revocation of a certificate, or termination of employment.

But while it found Cook to deserve discipline, the panel ultimately disapproved of PSD’s decision to terminate her employment:

While it was certainly an error in judgment, Ms. Cook removed the photograph when the problem was brought to her attention. She has subsequently acknowledged that her decision was a mistake and even PSD personnel recognize a sincere regret on Ms. Cook’s part. There is no evidence in the record that Ms. Cook has ever had any prior discipline or performance issues.

In the end, the grievance panel found that the school district should rescind the termination letter and reinstate Ms. Cook to her prior positions as a substitute teacher and head coach of the girls basketball team.

The panel’s decision did not make clear how much of a distraction this incident actually created for PSD’s students. But absent some major uproar, it is hard to understand how this escalated the way it did.

Admittedly, the boyfriend does have his hand on Ms. Cook’s breast. But as a whole, the photo seems more lighthearted than it does sexual. Judging by posture and facial expression, neither Ms. Cook nor her boyfriend seem to be overly inebriated. They are also clearly posing for the camera–not caught in the act of lusting after each other. In a family slideshow context, one can imagine the photo receiving a chuckle rather than a gasp.

Even so, Cook still should have known that the photo was borderline and not posted it in the first place–especially knowing that she had students that were also Facebook friends. In the wake of this episode, she most likely second-guessed the wisdom of friending current students in the first place. A large number of teachers/professors refuse to do so because it invites the potential for controversies like this.

Another interesting aspect of this story is how differently the school district treated the male teacher touching Ms. Cook’s breast in the photograph. The boyfriend in the picture is Tom Harrison, who is the football coach at Pocatello High School and also a teacher. But unlike Cook, Harrison was merely “reprimanded” for the photograph. Of course, Cook was the one who posted it to Facebook in the first place, so the disparity in punishment makes sense in that context at least. Regardless, the controversy has ignited several discussions about heightened societal sensitivity to the female body and whether it speaks to some underlying sexism.

PSD does not have a policy governing the use of social media by its employees. This is unfortunate because had such a policy been in place this matter may have been avoided.

The panel also made it a priority for the district as part of the resolution:

A fair resolution of this matter at this point is [for PSD] to . . . adopt a social media policy to avoid confusion about standards of conduct and instruct PSD employees about the standard to make sure it is understood.

Lastly, as Eric noted on Twitter, this is probably the first time we’ve seen the word “photobombing” in a legal opinion. Nice.
____