Duke was a police officer who was Deputy Chief of the Clayton State University Police Department. He had received uniformly positive job reviews. In the wake of the 2012 presidential election, he posted a confederate flag image along with the phrase “it’s time for the second revolution.” 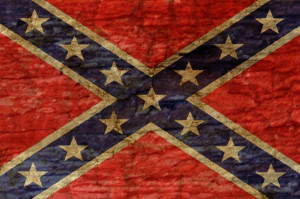 According to him, he only intended those “with direct access to his page, such as close friends and family, to view the post.” He made the post while off-duty, and neither the page nor the post referenced his employment in any way.

The post was up for a mere hour, but during this time, someone provided a screenshot to a local television station which ran a story discussing the post and plaintiff’s position as Deputy Chief. Viewers complained. Following an investigation, the chief of police recommended a demotion and plaintiff was demoted from Captain to Detective and received a pay-cut of $15,000. This allegedly caused plaintiff distress and exacerbated his heart condition. He resigned and filed a lawsuit.

The court analyzes his First Amendment retaliation claim under the Pickering test for public employee terminations. The first question in this inquiry is whether the speech was “a matter of public concern.” While the statement in question did not relate to his official job duties or even anything to do with his department, the court says that the statement is a matter of public concern (“because it expressed disapproval of elected officials, certainly a topic ‘upon which fee and open debate is vital to informed decision-making by the electorate’”). [Contrast this conclusion with the Court’s conclusion in Graziosi v. City of Greenville, where the court said complaints on Facebook over the supervisors’ decision to not send an official representative to a funeral did not touch on matters of public concern.]

[i]t is also plain that many in the community would take offense to his chosen form of speech, not just because they disapprove of it, but because it raises concerns of plaintiff’s prejudice—and the department’s. Appearing to advocate revolution, coming from a police officer charged with upholding law and order, could also undermine confidence in the department. In sum, the speech at issue was capable of impeding the government’s ability to perform its duties efficiently.

The court also considers the timing and place of plaintiff’s statement, and here has little sympathy for plaintiff:

[d]espite his intentions and his quick removal of it, the post illustrates the very gamble individuals take in posting content on the internet and the frequent lack of control one has over further dissemination.

Finally, the court says that even if this isn’t the precise legal outcome, qualified immunity shields the chief’s decision.

This case is pretty much a continuation of cases involving a bunch of different imprudent content postings by employees, especially those working for the government. We’ve seen posts from police officers, nurses, teachers, and from people charged with adjudicating people’s entitlement to benefits. It’s a rare case where a public employee is able to obtain a reversal of an employment decision that’s premised on a Facebook rant. My two cents: as an employee, you are better off sticking to the old fashioned water cooler.

Probably the most important thing one could take from this decision is the court’s admonition about the gamble people take when posting content online. You never ever ever want to come into court making an argument that you intended a particular message you posted online to be disseminated to a more limited audience. This argument never has worked–and never will! Indeed, the context of the post can rarely if ever be used to the speaker’s benefit. Here, the post was up for a mere hour, and the post did not reference the plaintiff’s employment or even associate himself with the police department. This did not matter, because someone else did all of this for him.

From a free speech standpoint, I hope I’m not allowing my lack of sympathy for people who post imprudently to Facebook temper my First Amendment instincts. Should more of these cases be going the other way?

Eric’s Comment: I really can’t think of any situation where it’s politically correct to display the Confederate Flag except as a historical artifact. That symbol has so much baggage and thus is easily misinterpreted. At the same time, I think it gets really dangerous for society when we fetishize (positively or negatively) historical symbols because it can lead too quickly to misunderstandings and overreactions. I remain especially concerned that government employees are getting slammed for making poor but understandable mistakes with their social media accounts. I don’t want an overtly racist police officer or a capricious social worker or hearing officer, but I also don’t want to disqualify qualified government employees for privately-held views that don’t affect their job performance. If we create too many acid tests for government employees, we may have difficulty finding the right talent to handle some of the most socially important jobs.

Venkat’s Follow-up Comment: I agree with Eric’s comment. The Confederate Flag raises interesting First Amendment issues, and particularly in the school and license plate contexts have led to some worrisome rulings. As a general matter, to the extent these types of Facebook-firing decisions are used by the government to enforce the orthodoxy, that’s not necessarily a good thing.