I’ve often wondered about the conversations that take place between trademark owner and counsel before filing a keyword advertising lawsuit. How extensively do they discuss the risks? There’s plenty to discuss. You can get bad publicity and alienate customers (and employees, vendors, etc.). You can have a court declare your trademarks weak or invalid so they are less valuable than when you started. You can get less damages than the cost of litigation, so the whole effort is unprofitable. And in exceptional cases, you can pay the defense for their troubles–exactly what happened in this case. How did that come about? Did the trademark owner proceed under the theory “what’s the worst that could happen?”, or did it contemplate and knowingly accept that risk after being well-advised by counsel upfront? 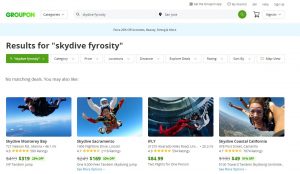 Las Vegas Skydiving brought a trademark lawsuit against Groupon because a search for “skydive Fyrosity” at Groupon says “No matching deals. You may also like ….” and produces search results for competitive skydiving vendors (see screenshot on the right). The court dismissed the case on summary judgment.

Groupon moved for attorneys’ fees pursuant to the Lanham Act fee-shifting provision, which applies in “exceptional” cases (as defined by Octane Fitness). The court says this lawsuit qualified:

The court summarizes: “LVSA went beyond zealous advocacy by engaging in objectively unreasonable litigation tactics and strategies. LVSA unnecessarily multiplied the fees and costs that Groupon was forced to incur, and wasted this court’s time and resources.”

The additional cost of LVSA’s litigation choices? They have to pay Groupon $325,000. The court imposes these costs exclusively against LVSA and not jointly against counsel, though it warns that this “should not be interpreted as an approval of counsel’s actions.”

Speaking of counsel, one of LVSA’s lawyers was Steven A. Gibson. Gibson is remembered to this day for his Righthaven copyright litigation scheme (against mom-and-pop bloggers!), which had the silver lining of producing some important defense-side precedent. Now he’s helping out by helping build out defense-side keyword advertising precedents. Should we say  🙏? Maybe he’d be interested in bringing some plaintiff-side cases challenging Section 230?