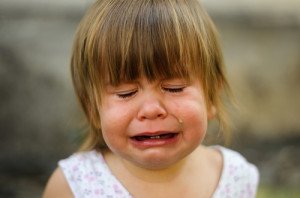 Speaking of babies, why are trademark owners such babies when it comes to competitive keyword ads? Photo credit: Little child crying // ShutterStock

There is an active, long-standing and wide-ranging litigation war being waged between two groups of websites in the “sugar daddy“/”sugar baby” hook-up category. I believe Jake will blog their beefs in more detail, so this post will just focus on one corner of the litigation war.

Infostream claims trademark rights in the terms “WhatsYourPrice.com” and “Seeking Millionaire,” and it alleged that Avid (operator of the notorious website AshleyMadison.com among others) bought those terms as keywords in Google AdWords to promote its CougarLife.com, EstablishedMen.com and ArrangementFinders.com websites. In light of the Network Automation case the court relies upon, Infostream’s trademark lawsuit over the AdWords purchases goes nowhere. Calling Infostream’s arguments “self-defeating,” the court says:

Here, the SAC alleges that consumers searching for Infostream’s trademarks saw Avid advertisements off to the side of actual search results under the heading “ads.” Neither those ads nor the domain names of the sites advertised are alleged to have referenced any protected mark. Under such circumstances, “[i]n the age of FIOS, cable modems, DSL and T1 lines,” Infostream cannot plausibly claim that Avid’s mere use of keywords caused any consumer confusion. [cite to Tabari]

As a result, Infostream’s keyword advertising allegations are tossed on a motion to dismiss–effectively saying that keyword ads not referencing a third party trademark are per se OK under trademark law. While the court probably is correct that consumers aren’t meaningfully confused by these ads, the court doesn’t parse the ad copy (remember, the Network Automation opinion remanded the case for further proceedings) or allow the trademark owner to generate a consumer survey after filing the complaint.

It’s amazing to think how keyword advertising litigation has evolved in the last 10 years. There’s no way this case would have been dismissed on a motion to dismiss in 2005 (and maybe even as late as 2009-10); indeed, in 2005, this case might very well have been a quick win for trademark owners. I’ve been insisting for a while that trademark plaintiffs no longer can win keyword advertising lawsuits. This case had comparatively easy facts where the ad copy apparently didn’t reference the trademarks at all, but even in the more complicated cases where the ad copy does reference the trademarks, plaintiffs aren’t winning those either (see, e.g., General Steel v. Chumley; Allied Interstate v. Kimmel & Silverman).

Trademark owners: How much more data do you need that keyword advertising lawsuits are meritless?
___