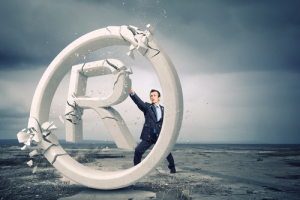 This case is so pathetic, it probably only warrants a tweet. The TL; DR version: another trademark owner initiates a lawsuit over keyword advertising and gets crushed in court. The end.

The antagonist is a Florida van rental service operating under several brands. The services include special transportation services for people with various ailments. The defendant, apparently providing similar or rival services, bought Google AdWords on several common phrases that overlapped with the antagonist’s brand names. The defendant also used Google’s dynamic keyword insertion tool, so the keywords–overlapping the antagonist’s brand names–showed up in the ad titles.

OK, what are these brand names worth a federal trademark lawsuit? Two of them are “Discount Mobility” and “Discount Mobility USA.” The PTO deemed them descriptive, and the court has little trouble agreeing. The only evidence of secondary meaning is that the antagonist has used the names on the web since 2002. The court says BFD.

The other litigated brand name is “Medical Travel.” The PTO found this term generic, and the court agrees–especially because the antagonist used the term generically in its marketing materials. The state of Florida registered the name, which gives it a presumption of validity, but the court says “that presumption has been overcome by overwhelming proof of genericness.” Oof.

What more is left to say? The antagonist spent a fair amount of money to have the court reiterate what the PTO already told it, and now the antagonist has judicial precedent that its marks are currently worthless or permanently dead. For similar outcomes in keyword advertising cases, see the Scooter Store and American Blinds v. Google cases. The only thing left for the judge to do is award the defendant its attorneys’ fees–arguably the case is “exceptional” given the antagonist’s attempts to enforce marks the PTO had already told it weren’t enforceable.

I’ll close by once again highlighting the real lesson about keyword advertising litigation: it’s rarely an economically rational decision, so the odds are good it’s not worth pursuing.