In the late 2000s, keyword advertising was one of Internet Law’s hottest topics. Now, not so much. Relatively few lawsuits are filed; they rarely last long in court; and most trademark owners have moved on. But in the Florida Bar, the keyword advertising debate rages on like it’s 2009.

If all this sounds familiar, you have a good memory. In 2013, the Florida Bar considered a proposal to ban competitive keyword advertising by lawyers. In a surprising upset, the Board of Governors narrowly rejected its standing committee’s recommended ban. Instead, the BOG said it “is of the opinion that the purchase of ad words is permissible as long as the resulting sponsored links clearly are advertising.” As I wrote at the time:

You might think this would have definitively resolved the issue. Certainly, intervening developments have reinforced the decision’s correctness. The issues became so clear that in 2015 I co-authored a paper declaring the demise of battles over competitive keyword advertising by lawyers. Any residual doubt should have been extinguished when the Texas Bar decisively reached a similar conclusion in 2016, opining that:

A lawyer does not violate the Texas Disciplinary Rules of Professional Conduct by simply using the name of a competing lawyer or law firm as a keyword in the implementation of an advertising service offered by a major search-engine company.

Yet, here we are in 2018, and the issue has risen from the dead. In Spring 2018, for the second time, the Florida Bar considered banning competitive keyword advertising. A summary (see page 54 of the PDF):

A Florida Bar member requests an amendment to Rule 4­-7.13, adding new subdivision (c) and new commentary that would state it is inherently misleading or deceptive for a lawyer to intentionally use, or arrange for the use of, the name of a lawyer not in the same firm or the name of another law firm as words or phrases that trigger the display of the lawyer’s advertising on the Internet or other media, including directly or through a group advertising program. For example, the proposal would ban the purchase of another lawyer’s name in Google adwords.

I’ve been told that the Board Review Committee on Professional Ethics voted down this request by a 4-5 vote. As I said in 2013, “Let’s hear it for small victories that preserve the status quo!”

But don’t start celebrating the small victory just yet. THERE IS A ROUND 3. The committee has a new proposal based on the ethics rule against marketing the name of lawyers who aren’t affiliated with the firm (an anti-bait-and-switch rule normally applicable to departing attorneys). The proposal includes a ban on:

plus the following commentary:

The committee will consider the third proposal at its next meeting on October 11. 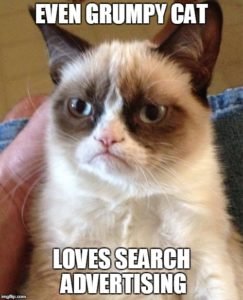 Regardless of its packaging in a different part of the ethics code, this is the exact same issue the BOG addressed and rejected in 2013. And the concerns are even less meritorious now than it was in 2013. There is still no evidence that competitive keyword advertising misleads anyone; and there’s growing evidence that the absence of competitive keyword advertising is far more likely to mislead consumers.

In response to the second proposal, Lyrissa Lidsky, Rebecca Tushnet, and I submitted a short letter to the Florida Bar explaining why this topic remains stupid. Our letter:

We write about proposed amendments to Rule 4-7.13 of the Rules Regulating the Florida Bar, relating to online keyword advertising by attorneys. In 2013, two of us submitted comments on this topic. This letter supplements those comments to highlight three subsequent developments:

Virtually no court has held that, on its own, a defendant’s purchase of a plaintiff’s mark as a keyword term is sufficient for liability.

The Federal Trade Commission (FTC) agrees. It recently said that “[o]ver the past decade, courts have consistently held that bidding for trademarked keywords alone is insufficient to establish a likelihood of confusion.” Complaint Counsel’s Corrected Pre-Trial Brief and Exhibits at 53, In the Matter of 1-800 Contacts, Inc., Docket No. 9372 (filed April 3, 2017) (the “FTC Brief”).

In 2016, the FTC brought an enforcement action against 1-800 Contacts for a systematic effort to suppress competitive keyword advertising. The FTC explained that “consumers not only understand that searches will bring ads from multiple companies, but have come to expect this variety.” FTC Brief at 58. Indeed, the absence of competitive keyword advertising hurts consumers and competition. An FTC-commissioned study concluded that “when a consumer of contact lenses is presented with only the 1-800 Contacts advertisement, that consumer is more apt to curtail her search and to settle for whatever price is offered by 1-800 Contacts.” FTC Brief at 33.

Since 2013, several published empirical studies have examined consumers and competitive keyword advertising. In particular, Jeffrey P. Dotson et al, Brand Attitudes and Search Engine Queries, 37 J. Interactive Mktg. 105 (2016), demonstrated that consumers conducting keyword searches using a particular brand often are not seeking only that brand. They explained that “there are many reasons a user might submit a brand search query. Users who are shopping in a category are more likely to search for any brand in the category.” Thus, in the context of attorney advertising, some prospective clients who know a particular lawyer’s brand will use that brand as a search keyword expecting—and wanting—to find search results for other lawyers providing similar services.

Let’s root for the best case scenario: that the third regulatory attempt fails and the status quo prevails again. Even if that happens, what are the odds that this is the last time the Florida Bar will consider this issue?

← A Cautionary Tale of Sarcasm in Social Media–Ross v. City of Jackson
The California Consumer Privacy Act Should Be Condemned, Not Celebrated (Cross-Post) →
Subscribe to Blog via Email
Categories