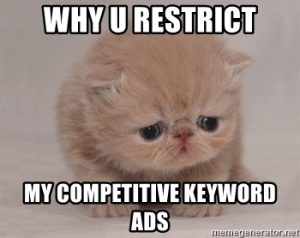 Starting in the mid-2000s, 1-800 Contacts sought to control how its competitors bought search engine advertising triggered by its (so-called) trademarks, a process I call competitive keyword advertising. To do this, 1-800 Contacts typically sued its competitors and then quickly entered into a no-money settlement agreement that required each party to stop bidding on each others’ trademarks.

1-800 Contacts’ competitors “voluntarily” entered into the settlement agreements, but they were goaded in part by 1-800 Contacts’ threat to wage lawfare against them if they didn’t. This threat wasn’t idle. 1-800 Contacts likely spent $1M+ suing a holdout to its settlement “deal,” Lens.com, even though Lens.com made only $21 of profit from competitive keyword advertising. (Lens.com claimed it incurred at least $1.4M of defense costs). In other words, 1-800 Contacts proved to the industry that it would engage in economically irrational litigation to punish any competitors who tried to compete against it on price.

Five years ago, the FTC initiated an administrative complaint against 1-800 Contacts. The FTC won at the initial administrative hearing and then at the Commission level.

Last week, the Second Circuit reversed and dismissed the FTC’s administrative complaint, saying that the FTC misapplied the applicable antitrust standard and did not make a strong enough evidentiary showing of an antitrust violation. This opinion is mostly antitrust inside-baseball, but I want to highlight a few things.

The court relies on a flawed assumption about competitive keyword ad auctions. It says “An absolute ban on competitive bidding, or bid rigging, would be anticompetitive on its face and may justify an abbreviated rule of reason analysis. It is not clear to us, however, that the restrictions constitute such a ban. The Challenged Agreements do not prevent the parties from participating in keyword auctions, only from bidding on trademarked terms. Whether restrictions on advertisers’ use of particular terms leads to overall harm to the search engines is not obvious.” Seriously? Even if it’s not a complete ban on participating in the keyword ad auctions, 1-800 Contacts’ scheme still constituted horizontal bid-rigging. To extend the court’s analogy, the scheme said auction rivals were free to attend a physical-space auction, but they pre-agreed not to bid against each other on specific items available at the auction. Because that deal removes bidders from the auction process for specific items, the court shouldn’t need much additional evidence to show how the seller was harmed in the process.

In bringing the enforcement action initially, the FTC took the position that competitive keyword advertising has always been legal, including during the mid-2000s, which made 1-800 Contacts’ litigation demands unreasonable from the beginning. The FTC has always been correct on this, but this court unnecessarily and unhelpfully says this is still a contestable issue: “At the time the agreements were entered into, the law regarding the validity of Petitioner’s trademark claims was unsettled, and it remains so in this Circuit.” Are we really doing this again? As a court said in 2018, “Virtually no court has held that, on its own, a defendant’s purchase of a plaintiff’s mark as a keyword term is sufficient for liability.” Alzheimer’s Disease and Related Disorders Association, Inc. v. Alzheimer’s Foundation of America, Inc., 2018 WL 1918618 (S.D.N.Y. Apr. 20, 2018). Several other courts since have echoed this sentiment. It’s unfortunate for the Second Circuit to suggest it’s still a live issue.

While the FTC flamed out in this enforcement against 1-800 Contacts, 1-800 Contacts paid $15M to settle private antitrust claims against it. So 1-800 Contacts didn’t exactly escape accountability. For that reason, I doubt other trademark owners will consider this ruling as a green-light to engage in schemes like 1-800 Contacts’. Then again, from 1-800 Contacts’ perspective, $15M is a small price to pay for the ability to charge supra-competitive prices to consumers for 15+ years. With the Second Circuit’s help, they could very well get away with it. Maybe en banc or Supreme Court review will correct this.

The FTC maintains a page with public filings in this case (last updated Oct. 2019). A selected library of materials (including some not on the FTC page):