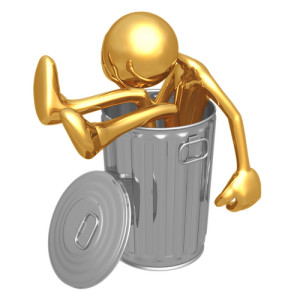 Photo Credit: In the Garbage Can // ShutterStock

The lawsuit’s principal participants are rivals in the precious metals and coin industry. The defendant organization, Regal, has an affiliate program, and it appears that some affiliates bought competitive keyword advertising using the plaintiff Goldline’s trademark. The ruling is on Regal’s motion to dismiss, and the judge’s overly pithy opinion raises as many questions as it answers. The court based its ruling on the following facts alleged in the complaint:

According to Plaintiff, Defendants purchase advertising keywords that include the GOLDLINE Marks so their websites will appear when search terms intended for Plaintiff are entered in the search engine. Many of the search results are not identified as ads. The purpose of the affiliates’ websites is to divert customers away from Plaintiff and other competitors, toward Regal. To that end, Regal prepares for its affiliates’ use, scripts and website materials that purportedly offer objective, independent evaluations and facts related to precious metal dealers. These
materials allegedly infringe on the GOLDLINE Marks. The materials also allegedly offer endorsements for Regal; false information and
statements about the independent and unbiased views of the reviewer; and false and disparaging information about Plaintiff, including customer complaints, pending litigation, and poor consumer and industry ratings.

The court dismisses the Lanham Act trademark and false designation of origin claims:

While the allegations and attached exhibits indicate that Defendants use Plaintiff’s marks, there is simply nothing stated, that if deemed true, constitute commercial use that would likely cause confusion as to the origin or affiliation of Regal’s products or services. In fact, the allegations either state directly, or create a strong inference, that the purpose of Defendants’ use of the marks is to disparage Plaintiff and endorse Regal. Taken as true, such conduct would seemingly distinguish Regal’s products from Plaintiff’s, as opposed to causing customers confusion as to the origins of the two products.

For this reason, I’m counting this case as yet another win where defendants defeated a trademark claim over competitive keyword advertising–a streak of defense wins that I think goes back to 2011. The court sidesteps the advertiser-affiliate interplay, so unfortunately we don’t get any insights into that issue.

Despite this good news, the court says a number of other claims survive the motion to dismiss, including:

Given the court’s inscrutable opinion, however, it’s unclear which (if any) of these claims survive solely due to the competitive keyword advertising aspect of the plaintiff’s allegations. At minimum, the defamation claim appears fairly clearly to be based on ad copy. Still, I imagine trademark plaintiffs suing over competitive keyword advertising will think about whether these alternative claims (including normally junky claims like RICO and civil conspiracy) might be worth a stab.

Some Related Posts on Keyword Advertising