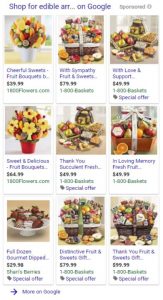 It’s been years since I’ve blogged a lawsuit against Google for selling trademarked keyword ads. About a decade ago, Google was dealing with about a dozen cases. Google won some of them and settled the rest, and everyone moved on.

Well, almost everyone. Edible Arrangements, which sells overpriced fruit baskets, decided to challenge Google’s cash cow worth billions of dollars of annual revenue. If you’re going to go after a trillion dollar company, at least you should bring your A-game. Instead, Edible Arrangements tried some “are-you-kidding-me?” claims that most lawyers would be too embarrassed to assert. (Shoutout to the plaintiff’s lawyers at Bondurant Mixson & Elmore LLP, including Jason Carter, the former president’s grandson). Guess how well that worked.

Edible Arrangements claimed that Google committed theft of its “property”–its trademarked name–by selling the property in its keyword auctions. This raises an issue as old as Internet Law: when is intangible property legally equivalent to physical space property for purposes of pre-Internet statutes like “theft of property”? Normally laws like “theft” are built upon unstated assumptions about the rivalrous nature of physical chattel, so they should not apply to nonrivalrous intangibles (such as a trademarked name). The court explains:

Google has not taken Edible IP’s trade name or sold it for profit. Rather, Google has auctioned off the opportunity to advertise on the results page produced when an individual types the keyword phrase “Edible Arrangements” into the Google search bar….it does not “deprive” Edible IP of any property…Creative pleading cannot convert Google’s advertising program into a theft by taking

The court adds that theft claims must be interpreted narrowly due to the rule of lenity (i.e., courts shouldn’t expand a civil statute when it would also expand the associated crime).

The rest of the short opinion is similar. For example, regarding the conversion claim, the court says Google didn’t exercise ownership over Edible Arrangement’s IP. “Google simply sold advertising space on search results pages triggered by the phrase ‘Edible Arrangements.'”

The only thing surprising about these conclusions is that SIX plaintiff’s lawyers worked this case thought it was worth litigating in the first place.