Over the course of about a decade starting in 2004, 1-800 Contacts entered into over a dozen settlement agreements with competitors, most of which mutually restricted both parties from buying keyword ads triggered to their competitor’s trademarks and sometimes requiring the use of negative keywords. The FTC challenged this practice as anti-competitive via the FTC’s administrative adjudication process. In a behemoth 215 page opinion peppered with annoying redactions, the ALJ agrees with the FTC. The opinion’s summary:

Complaint Counsel has met its burden of proving that the Challenged Agreements unreasonably restrain trade in violation of Section 5 of the FTC Act. Contrary to Respondent’s argument, FTC v. Actavis, 133 S. Ct. 2223 (2013), is not authority for the proposition that trademark settlement agreements are immune from antitrust scrutiny.

This opinion is chock-full of goodies. Normally I’d recommend reading the whole thing. However, at a hefty 215 pages, it would take you a long time to do so. Here are some of the highlights I saw.

Expensive Litigation. The ALJ summarizes the scope of this case:

When I see numbers like this, I think $$$$$$$$$$$$$$$ legal fees and expensive family vacations in Hawaii for the lawyers (and the experts).

The opinion says, many times and in many ways, how 1-800 Contacts’ competitors love search advertising and want to do more of it. Google should get many good testimonials out of this. These quotes from AC Lens are typical of the opinion:

* “In the view of AC Lens, pay-per-click search advertising is the most effective and important marketing channel that AC Lens uses to grow its business. (Clarkson, Tr. 230 (pay-per-click “has been historically the lifeblood of [AC Lens’] growth.”); CX9039 (Clarkson, Dep. at 175-76 (search advertising has played a “tremendous role” in AC Lens’ success); CX9018 (Drumm, Dep. at 124-25); CX9018 (Drumm, Dep. at 124-25 (search advertising is particularly effective because it is high volume, in that it presents AC Lens with a high “[t]otal number of potential impressions.” The “volume from search is massive, so that’s why it’s the most important probably.”)).”

* “To AC Lens, search advertising is a particularly valuable type of advertising because it can be used to target customers who are specifically looking to purchase contact lenses. (CX9039 (Clarkson, Dep. at 173-75) (“[B]road-based marketing that does not target is inherently far less efficient in reaching a target audience. Search is beautiful in the sense that you get right in front of the customer who’s looking to buy your product, and you don’t pay unless they click on your ad. It’s a wonderful thing.”)). ” 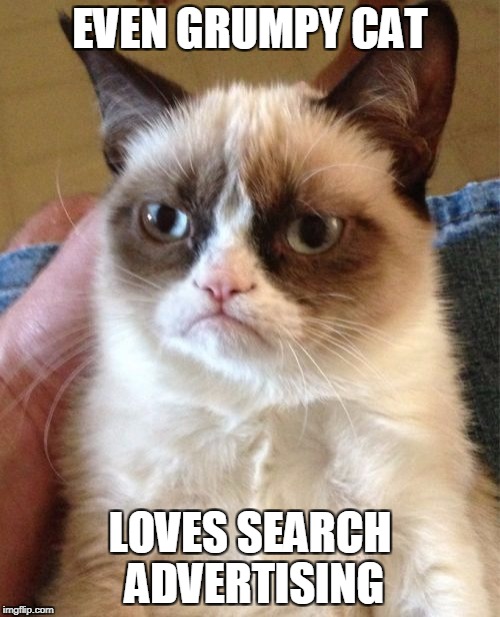 More testimonials come from retailers endorsing the brand value of running keyword ads even if they aren’t clicked:

* Walmart: “Walmart considered it useful to show its contact lens advertisements in search advertising results even when users did not click on the ads because showing ad impressions builds brand awareness and awareness that Walmart sells contact lenses.”

* LensDirect: “For LensDirect, having advertisements appear in responses to a search for 1-800 Contacts, even if the consumer does not click on the LensDirect ad, can improve LensDirect’s brand visibility. This helps LensDirect because “the more times people see LensDirect, the better chance there is of them becoming a customer one day.””

* Memorial Eye: “Memorial Eye believes it benefitted from having ads appear in response to searches for 1-800 Contacts, even if the consumer intended to navigate to 1-800 Contacts’ website, because doing so improved Memorial Eye’s brand recognition. ”

1-800 Contacts’ Keyword Bids on Its Own Trademarks

Trademark owners hate bidding on their own trademarks because they feel like they pay search engines for actual or prospective customers they already “bought” through other forms of advertising. Still, these bids are highly successful for 1-800 Contacts. Some of the details we learn:

* “About 75% of all paid search orders come through our trademark terms.”

Not surprisingly, competition for bids on its branded keywords literally cost 1-800 Contacts money: “An August 7, 2007 analysis by Mr. Craven estimated that 1-800 Contacts may have lost around $426,000 in revenue to Lens.com, year to date, as a result of Lens.com ads appearing in response to searches for 1-800 Contacts’ trademarks….During the week ending September 22, 2007, 1-800 Contacts noted a 6% week over week drop in trademark paid search orders, relating this in part to competition from Vision Direct, which had been “advertising in the 2nd position on many of [1-800 Contacts’] branded terms in Google.””

1-800 Contacts’ competitors definitely want a piece of the action 1-800 Contacts gets from its branded keywords:

AC Lens believes it could benefit from showing its advertisements to a person who entered a search query for “1-800 Contacts,” “[b]ecause we sell the same products and we sell them at a lower price.” (Clarkson, Tr. 378; CX9018 (Drumm, Dep. at 152) (“Bidding on their terms would provide us an opportunity to show those people that there’s an alternative.”); id. at 197 (“There are a lot of people that search for ‘1-800 Contacts’ from what we can tell via the keyword tool and other sources. Those are people who are most likely looking for contact lenses to purchase, and it would be definitely relevant and helpful to advertise our sites in that location.”)).

To AC Lens, it would be more valuable to show advertisements in response to search queries for 1-800 Contacts’ brand name terms than in response to search queries for the brand names of other online contact lens retailers because of “the price advantage that [AC Lens] enjoy[s]” relative to 1-800 Contacts. (CX9039 (Clarkson, Dep. at 156); see also Clarkson, Tr. 253 (“Also, there’s less value in advertising on, say a Vision Direct term because they’re in roughly the same price point, so there isn’t quite the same incentive for consumers to switch.”))….

AC Lens believes that some portion of people who search for 1-800 Contacts “would be interested in an offer [from AC Lens] that said, ‘[w]e’re 20 percent cheaper’” and that such message “would be a compelling proposition to consumers.”

The opinion provides some interesting comparative detail about the keyword ad costs and performance for Memorial Eye and LensDirect:

Overall, LensDirect’s cost per conversion is noticeably higher, and conversion rate is noticeably lower, than Memorial Eye’s. The opinion doesn’t explain why. Two hypotheses that came immediately to mind: (1) the LensDirect data is later in time than the Memorial Eye data. This could mean that keyword ads got more competitive. It could also mean that retailers were willing to pay more because their profits soared due to manufacturers’ resale price maintenance (discussed below). (2) Perhaps there are differences in the two websites that makes it harder for LensDirect to convert.

LensDirect’s performance with the “1800contacts coupons” keywords also stands out because their performance is noticeably better than the other cited keywords–in the case of the exact match, less than 25% of the conversion costs of other listed keywords. Unfortunately for LensDirect, I suspect the traffic volume for this search term is tiny compared to the other terms.

A reminder that 1-800 Contacts’ customers are probably overpaying. The opinion says succinctly: “1-800 Contacts on average has retail prices for contact lenses below independent ECPs and retail optical chains, but higher than mass merchants, club stores, and other online retailers.” Some more detail:

* “In conducting its due diligence regarding its potential acquisition of 1-800 Contacts in 2012, Berkshire Partners’ investment analysis team concluded that “a sizeable segment” of consumers were uninformed about lower-priced options for purchasing contact lenses online.”

Worse, it appears that resale price maintenance has hurt consumers. Due to resale price maintenance imposed by manufacturers starting in 2014, “discount sellers (online retailers and club stores) had to increase their prices substantially, by roughly 20 to 25%, on many of the affected products.” I wonder if the FTC is going to look into this issue too?

What’s Next for This Case?

This ALJ opinion is comprehensive, exhaustively cited, and thoughtful. As painful as it was to read a 215 page opinion, this opinion was well-crafted and surprisingly readable. The factual findings are well-presented and not favorable to 1-800 Contacts, something that will likely dog 1-800 Contacts throughout the rest of the case.

1-800 Contacts has already indicated it will appeal the decision. The appeal goes to the FTC Commissioners, of which there are only two out of the normal five. I don’t know what to expect at that stage. Regardless of the commissioners’ decision, the case will surely proceed to federal court.

Case library: The FTC maintains a page with all of the public filings in this case. Here’s a selected library of materials: