1-800 Contacts Charges Higher Prices Than Its Online Competitors, But They Are OK With That–FTC v. 1-800 Contacts

As you recall, the FTC has taken the position that 1-800 Contacts’ agreement with competitors, via settlement agreements, not to bid on each other trademarks as keywords violates antitrust laws. Prior blog posts:

The FTC’s pretrial brief was 90 pages. 1-800 Contacts takes 120 pages to respond. The FTC listed 14 lawyers on its caption. 1-800 Contacts lists 10 lawyers of its own. This is a seriously lawyered-up case.

* Poor widdle 1-800 Contacts. Although it says it’s spent a half-billion dollars building its reputation, “1-800 Contacts remains a small player, accounting for only 10% of sales, in a market dominated by ECPs who possess inherent market advantages (e.g., they write the prescriptions required for purchase).”

* Unclean hands. Many keyword advertising plaintiffs have engaged in competitive keyword advertising themselves, trapping them in duplicitous positions. 1-800 Contacts is no exception. Nevertheless, the brief claims that “1-800 Contacts’ consistent policy has been not to bid on its competitors’ trademarks.” Later, the brief says “1-800 Contacts, as a policy, did not select other party’s trademarks as keywords.” Just like Trump’s taxable revenues aren’t from Russia “with few exceptions,” a footnote qualifies this: “On very rare occasions, 1-800 Contacts’ advertisements inadvertently appeared in response to searches for a competitor’s trademark.”

We think it noteworthy that prior to filing its lawsuit against WhenU, 1-800 entered into agreements with WhenU competitors Gator and Yahoo! to have its own pop-up and banner ads delivered to C-users in response to the C-users’ input of particular website addresses and keywords that were specified by 1-800. Included in the list 1-800 provided to Gator, for instance, were the website addresses for several of 1-800’s competitors, including defendant-appellee Vision Direct, Coastal Contacts, and Lens Express.

* Trademark settlements are good things (?). “as settlements of litigation that protect trademark rights, the agreements that Complaint Counsel have challenged in this case are procompetitive twice over.”

Later, the brief says “there is little risk that a trademark owner will try to settle trademark disputes to divide monopoly profits….” But that’s exactly what the FTC say 1-800 Contacts did. The brief adds “the fact that so many online retailers chose to settle with 1-800 Contacts using standard non-use agreements strongly suggests that the settlements here are ‘supported by traditional settlement considerations.'” But elsewhere 1-800 Contacts made a big point about how small competitive keyword ads are in the overall ad puzzle. Everyone seems to agree that the competitors settled to avoid the cost of litigation.

* The “Everyone is doing it” Argument. “1-800 Contacts’ settlements were standard non-use agreements whereby a party agreed not to use the other’s trademark….This form of settlement has frequently been used to settle disputes regarding the use of trademarks in paid search advertising.” (listing 6 cases). The brief also says “courts across the country have issued similar injunctions barring entities from using another’s trademark in the specific context of keyword searches.” (listing 11 cases plus a cf.)

Interestingly, the brief spends virtually no time trying to show that competitive keyword advertising actually constitutes trademark infringement. Nevertheless, this battle is being fought among the experts. More on that in a moment.

* A swipe at Dr. Jacoby. Dr. Jacob Jacoby of NYU is one of the FTC’s experts. I believe he has done hundreds of trademark surveys. The brief says “Complaint Counsel retained Professor Jacoby despite the fact that his studies have been entirely excluded in at least four cases, and have been severely criticized or given little to no weight in nearly twenty other cases.” If you do as many trademark surveys as Dr. Jacoby, you’re going to have a bottom X%. I suspect the FTC will respond by showing how he has been deemed a credible expert and praised by judges in hundreds of other cases.

To my knowledge, the expert reports have not been publicized released as a group. Nevertheless, the FTC attached the Hogan and Landes reports as exhibits to its arguments about why Prof. Tushnet could testify in rebuttal on legal matters. Whatever the reason for the FTC sharing the reports, it’s a worth a look.

* The (Phantom) Policing Duty. The expert report discusses the “policing duty” of trademark owners (paragraphs 27-31), suggesting that 1-800 Contacts had to police against the keyword advertisers or suffer adverse consequences. As I’ve discussed repeatedly on the blog, the policing “duty” is routinely overstated by trademark counsel and sometimes trademark clients as a justification for spending more money even though it usually takes a fair amount of neglect before there are any consequences. Also, the report doesn’t mention the STK v. Backrack case, which said “respondent’s failure to pursue purchasers of “backrack” as a keyword is not evidence of failure to police its mark.” So there’s a significant chance that the policing “duty” is overstated in the competitive keyword advertising context.

Also, the report doesn’t mention that the initial interest confusion doctrine has been waning in courts for the past decade.

* Paragraph 48 quotes the risk of searcher confusion from Bihari v. Gross–an opinion from *2000.* Hmm, I wonder if search engine behavior has changed in the intervening 17 years.

* Dilution. “courts agree that trademark dilution claims are viable in the keyword advertising context, and that such claims often cannot be resolved on the pleadings, or even at summary judgment.” Ugh. From FN 31 of this article:

* “Some of Bing’s own internal documents also seem to indicate that a significant percentage of consumers have been confused by Bing’s keyword advertising program. According to these Bing reports, when trademark owners do not bid on their own mark for keyword advertising—thereby placing sponsored links to other companies as the top search result—40% of users click on the non-owner advertiser’s link. If the trademark owner does bid on its own mark for keyword advertising—and thus competes with other advertisers to be placed as the top search result—only 9% of user click on the non-owner advertiser’s link. This evidence appears to indicate that as much as 31% of Internet users who search for a particular brand can be induced to instead click on a link for a competing advertiser simply because the search engine is paid to place that advertiser in the top spot.” But is any of this relevant to harms protected by trademark law? Or is this just fair competition where consumers are researching alternatives?

I don’t have many comments on this report. It’s a fairly typical economist’s exposition on trademarks and search costs. The thing that stood out most to me was Landes’ rate: $1,500/hour. Whoa. At least his report was shorter than Hogan’s.

This slide speaks for itself: 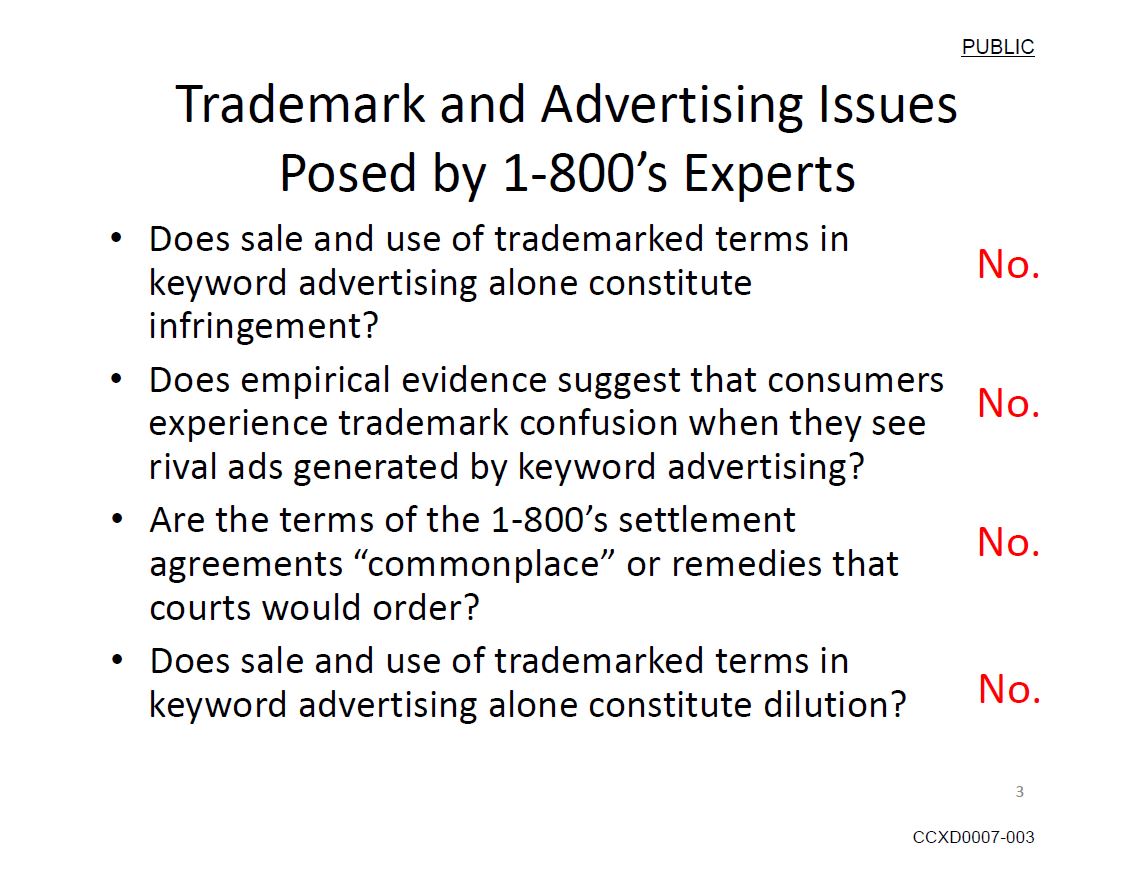 A few snippets of his report are included in the slides.