Dr. Stephen Greenberg is a plastic surgeon on Long Island. Perfect Body Image provides “non-surgical and non-invasive aesthetic services, including, among other things, laser treatments.” Perfect Body doesn’t have any doctors on staff. In addition to Stephen, at least two other Dr. Greenbergs in the region provide laser services. Popular name for doctors, apparently.

Seeking to boost business, Perfect Body bid on the keywords “Dr. Greenberg,” “Doctor Greenberg,” and variations at Google. Perfect Body used the keyword insertion feature so that the search query appeared in the ad headline. Here’s a screenshot from the opinion (sorry for the poor image quality) showing Perfect Body’s ad at the top: 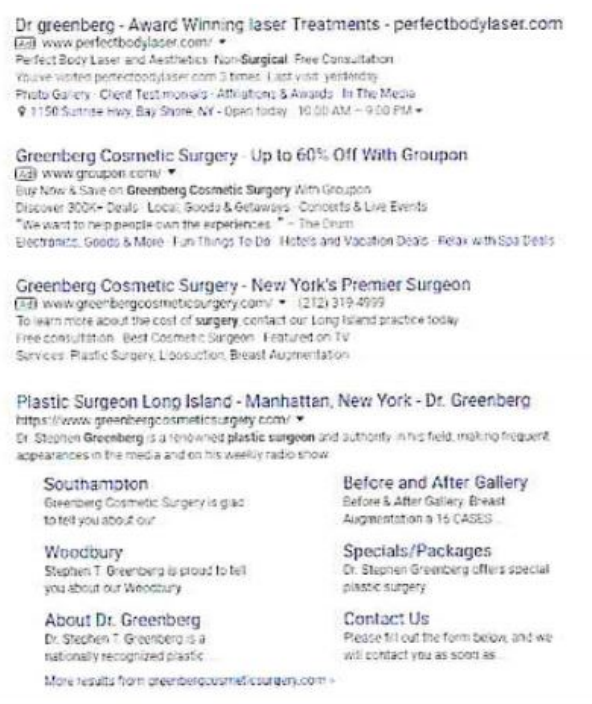 The court nevertheless applies the familiar multi-factor infringement test, which it says is appropriate for keyword ad cases. The top-line conclusion: “it is unlikely that any appreciable number of ordinarily prudent purchasers would be confused by Perfect Body’s Campaign, especially given the lack of any direct evidence of actual consumer confusion.”

Regarding the other factors, the court largely says that the parties didn’t give it enough evidence to evaluate.

The court addresses another factor, ad labeling, which the court says mitigates confusion:

Defendant has admittedly done more than just purchased keywords because its Campaign used Google’s keyword insertion feature, causing Dr. Greenberg’s surname to be displayed in the headline of the Advertisement. Nevertheless, Perfect Body’s Advertisement adequately distinguished itself from the link to Plaintiffs’ own website appearing below. Specifically, the Advertisement: (i) was labeled as an “Ad” and segregated from the non-sponsored links; (ii) contained Perfect Body’s own URL in the text of the link; and (iii) indicated that its services were “non-surgical,” whereas Plaintiffs’ links: (i) appeared separately from the sponsored links; (ii) included a link directly to Greenberg Cosmetic’s website; and (iii) contained indications that the services offered were surgical and performed by doctors.

Unfair Competition. This fails without a supporting Lanham Act violation.

Publicity Rights. The advertiser didn’t use Stephen’s full name, and other Dr. Greenbergs may have been referenced.

While that’s true, I did scratch my head over the disambiguation issue. Read literally, it means none of the three Dr. Greenbergs could ever sue over the advertisement, because the ad reference could be to any of the three. Then again, if any Dr. Greenberg actually achieved secondary meaning over the other Dr. Greenbergs, that doctor would get more consideration than this plaintiff did. To be clear, I still think the case should lose because of the lack of consumer confusion about keyword ads, but the disambiguation problem wouldn’t contribute to that loss.

You can file this ruling as another example where the plaintiff’s trademark appeared in competitive keyword ad copy and the plaintiff still lost. As you can see, the use of the keyword insertion tool was inconsequential to the court’s outcome. Accord Florida Van Rentals v. Auto Mobility Sales.

Case citation: Greenberg v. Perfect Body Image, LLC, 2019 WL 3485700 (E.D.N.Y. July 2, 2019). This is a magistrate R&R. The court extended the deadline for objections to August 2, but my perusal of the docket on August 6 didn’t reveal any objections filed by the plaintiff. While it’s possible for the supervising judge to reject the magistrate’s recommendations without any objection from the plaintiff, it seems much more likely this opinion will stand.