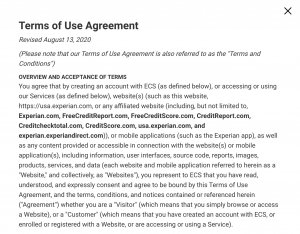 Stover signed up for an Experian subscription for credit monitoring in 2014. She alleged that Experian overstated the relevance of the credit report. She cancelled her subscription in 2014. In 2018, she accessed Experian’s website again, shortly before filing suit. By 2018, Experian had implemented revisions to its terms.

had changed to accommodate a carve-out for disputes ‘arising out of or relating to the Fair Credit Reporting Act (FCRA) or other state or federal laws relating to the information contained in [the customer’s] consumer disclosure or report, including but not limited to claims for alleged inaccuracies in [such report] . . .

Stover filed suit alleging violations of the FCRA and claims for unfair competition. Expedia moved to compel arbitration. The district court found that the 2018 terms governed. However, the court found that Stover’s lawsuit did not fall within the exception as the 2018 carve-out addresses only claims “relating to the information contained in [Plaintiff’s] consumer disclosure or report,” Stover’s claims fell outside this exception.

Are the 2018 Changes Operative?

On appeal, the Ninth Circuit rejects the idea that Stover’s brief pre-lawsuit visit to the website bound her to the new terms:

we are asked whether a single website visit four years after assent to a contract containing a change-of-terms provision is enough to bind the parties to terms in the then-current version of contract of which the visitor is unaware . . . [w]e answer [this] in the negative.

The court cites to Douglas v. Talk America and notes that mere inquiry notice is not sufficient to bind a consumer in this context:

Stover had no obligation to investigate whether Experian issued new terms without providing notice to her that it had done so. Indeed, the opposite rule would lead to absurd results: contract drafters who included a change-of-terms provision would be permitted to bind individuals daily, or even hourly, to subsequent changes in the terms.

In order to bind the parties, both parties are required to have notice. Stover’s argument to the contrary is rejected.

The 2014 terms required arbitration of all claims to the “fullest extent permitted by law”. It was unclear whether the arbitration clause encompassed claims for public injunctive relief. The 2014 terms were susceptible to a challenge on this basis. However, Stover failed to allege a threat of future harm sufficient to have standing to seek a public injunction. Stover belatedly argued in reply that she could allege sufficient facts to confer Article III standing, but the court says this request comes too little too late. In any event, after previewing the allegations which Stover said she would allege if given permission, the court says these are insufficient.

One oddity in this case is the arguments of the parties regarding what is required to bind a consumer to changes in online terms. Here, Experian made the following argument:

That sounds more like an argument a consumer would make.

We blog a lot of online contract formation cases. One of my favorite posts in this genre is Harris v. Blockbuster, which frowned upon online terms that say they can be freely, even immediately, amended by the company.

A point related to when online terms can be amended is how an amendment becomes operative and how to separate users who fall under one set of terms from those which fall under a newer set of terms. Eric’s post on Douglas v. Talk America delves into this a bit. Often companies will limit changes to those users who log-in following the changes and include something like a pop-up window which requires users to confirm their agreement to the changes. Here, this did not occur and the person seeking to enforce the new terms argued that merely visiting the website while the new terms were in effect were sufficient to constitute agreement to the new terms.

This seems like a fairly straightforward application of Douglas. In any event, it’s a good reminder to companies that they are free to try to implement revised online terms, but they need to have some mechanism by which they can demonstrate they provided notice to users. Ideally, they’d also have a mechanism by which the users would affirmatively indicate their consent to the revised terms (and such mechanism should be leak-proof).

* This one sat in the queue for a few months, but given the topic I thought it was worth blogging.

* Stop Saying “We Can Amend This Agreement Whenever We Want”!–Harris v. Blockbuster