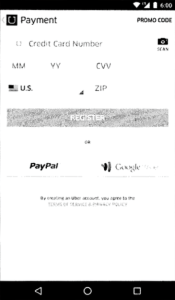 This is an antitrust case against Travis Kalanick, the founder of Uber, alleging that Mr. Kalanick “orchestrated and participated in an antitrust conspiracy.” Uber moved successfully to intervene, and then moved to force arbitration (Mr. Kalanick joined in this motion). The court denies the motion to compel arbitration, finding fault with Uber’s contract formation process. If the parties did not form an enforceable agreement, then there is no basis to compel arbitration.

Uber’s contracting process at the time required someone to input their payment details, and then “register” to form an account. The text under the “register” button said:

The terms of service and privacy policy were links, and if a user clicked on the links, he or she is taken to a screen where they must press another button to access the terms. Plaintiff said he does not recall the hyperlink or clicking it, and Uber did not contest this.

Here, the User Agreement to which plaintiff Meyer allegedly assented was clearly not a clickwrap agreement. Mr. Meyer did not need to affirmatively click any box saying that he agreed to Uber’s “Terms of Service.” On the contrary, he could sign up for Uber by clicking on the “Register” button without explicitly indicating his assent to the terms and conditions that included the arbitration provision. See Mi Deel., Exhibit A, at 002. As with a browsewrap agreement, an Uber user could access Uber’s services “without visiting the page hosting the browsewrap agreement or even knowing that such a webpage exists.” . . .

It could be a “sign-in wrap agreement” says the court. Ultimately the court says labels don’t help with what is a fact-specific inquiry. And the key question is the conspicuousness of the terms. And Uber’s account creation process does not score well from this perspective. Given the (actual) screen size, which the court takes the trouble to screenshot, the text is small, and the font does not call attention to the terms. Even the wording of the hyperlink is not designed to bring the terms to an average consumer’s attention:

Further still, the wording of Uber’s hyperlink adds to the relative obscurity of Uber’s User Agreement. The Court cannot simply assume that the reasonable (non-lawyer) smartphone user is aware of the likely contents of “Terms of Service,” especially when that phrase is placed directly alongside “Privacy Policy.” There is, after all, a “breadth of the range of technological savvy of online purchasers” (and smartphone users).

In the end, the court says that if Uber wanted a consumer to waive core legal rights such as the right to a jury trial, it should have made the sign-up process harder:

There is a real risk here that Uber’s registration screen “made joining [Uber] fast and simple and made it appear – falsely – that being a [user] imposed virtually no burdens on the consumer besides payment.”

Yowza! Uber’s arbitration clause was found to be unconcsionable and not enforced by Judge Chen in a ruling involving its drivers, and at the time I wondered whether this was because of the status of the plaintiffs (as putative employees). This ruling shows judicial hostility to Uber’s arbitration clause extends beyond this. In contrast to Judge Chen, Judge Rakoff found that no contract was formed in the first place. (Uber’s terms of service have been upheld, as mentioned in our recent post here.)

It’s unclear whether this ruling affects all consumers who signed up under this contracting process, or whether Uber has required these consumers to revisit the terms. Either way, it’s a pain for Uber to deal with.

What Uber could have done differently?

The big question is whether both an unambiguous manifestation of assent and requiring a reader to scroll through are required, or whether only one suffices. The subtext of the court’s ruling is that even a clear check-the-box with an unambiguous manifestation of assent would not necessarily have been sufficient. The court went so far as to find fault with the way Uber labeled its terms, suggesting that even a check the box with a clear call to action would not necessarily have done the trick. (Eric blogged about a case recently at the other end of the spectrum where the company seeking to enforce an agreement linked to “reference“.  Uber took the standard approach by callings its online contract “terms of service,” I’m not sure what more it could have done?) The fact that the arbitration clause is buried within the terms could also have been a problem.

There have not been any rulings that explicitly decide to treat terms of use agreed to on a phone (or other device) differently. This ruling does not do so, but the court is clearly influenced by the size of the text as the user sees it. Could this be the start of a (troubling for app developers) trend?

On the other hand, there is a lot going on in this case other than the presentation of the terms itself that could have influenced the court’s thinking. It’s a lawsuit against Kalanick (perhaps strategically named to avoid arbitration) and Uber intervened. Uber also investigated the plaintiff and plaintiff’s counsel, which resulted in a serious blowup. The court was not happy about this to say the least. The court’s ruling reflects some hostility towards Uber and the online contracting process in general. (Judge Rakoff is also known for not being afraid to go out on a limb in his rulings, and he famously battled with the SEC over his stance on prosecution of financial fraud.)

I would guess the company is weighing an appeal. An appeal could be a good opportunity for the Second Circuit to clear up online contracting case law, revisit Specht, and provide guidance to app developers in implementing their terms of service.

Eric’s Comments: Uber got a raw deal in this ruling. The -wrap nomenclature is the most obvious suspect for why this opinion goes so far wrong. Of course that’s especially irksome because every regular blog reader already knows that the -wrap nomenclature is garbage, so seeing it lead to an avoidable bad courtroom result is especially painful. The court says this is clearly not a clickwrap, but we all know that’s exactly what it is, and the only reason why the court didn’t see that is that *no one* understands the terms clickwrap or browsewrap. (Or, the court understood the nomenclature just fine but nevertheless indulged in judicial activism, a theory I cannot rule out).

Sure, Uber could have tightened up its contract formation process. To me, its biggest weakness was its call-to-action, which did not expressly cross-reference the “Register” button. If the call-to-action had said “By selecting ‘Register,’ you agree to Uber’s terms of service and privacy policy,” it would have been that much harder for the court to miss the point. Even so, when the call-to-action says “By creating an Uber account…” and there’s a button on the page saying “Register,” what do users think the “Register” button does? Perhaps some users won’t get it, but most users surely think they are going to create a registered user account when they register. After all, virtually every Uber user has gone through online registration processes dozens or hundreds of times before creating the Uber account. This is not 1994.

As Venkat indicates, the mobile interface also contributed to the trainwreck. Uber positioned the call-to-action too low on the (small) screen, and it used a font that was small on a mobile screen. If Uber had placed the call-to-action above the Register button and had boosted the font size, that probably would have helped.

Finally, in the past, we used to say that it wasn’t necessary for online services to use checkboxes to confirm user assent to the terms or UI tricks like forcing users to scroll through the terms before being able to proceed. Those trick introduce UI barriers and extra technical complexity that should not change the legal analysis for otherwise-properly-formed clickthrough agreements. But when we see painful decisions like this one, I’m sure all of us wish Uber had Hermione’s Time-Turner and could go back in time and implement those technical tricks. Venkat and I had already reversed ourselves on the value of the confirmatory checkbox, but perhaps we need to further reverse ourselves on the mandatory scrollthrough before users can proceed. So next time you’re slowed down by all of these UI tricks, when you just want to quickly create an account and get on with your life, I’ll understand if you choose to mutter some sarcastic thanks to Judge Rakoff for the extra hassle.

How To Get Your Clickthrough Agreement Enforced In Court–Moretti v. Hertz

Judge Can’t Decide if Facebook’s User Agreement is a Browsewrap, But He Enforces It Anyways–Fteja v. Facebookb