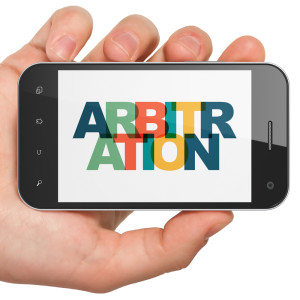 This lawsuit alleges that Amazon overstated the extent of discounts it offered customers (in stating the extent of the discount customer achieved when shopping at Amazon versus competing retailers). Amazon moved to compel arbitration, and the court grants the motion. The efficacy of arbitration clauses in online terms of service agreements is an evergreen topic of interest, so although it was decided in late October I thought the case was worth noting.

The court agrees with Amazon that Washington law applies. Plaintiffs argued for application of California law, but were unable to point to a fundamental conflict between the laws of the two states.

The terms are not illusory. The agreement reserved the right for Amazon to make changes at any time and without prior notice. Plaintiffs argued that this rendered the agreement illusory. The court disagrees, and says that Amazon has agreed to arbitrate disputes as to products purchased. This obligation remains unchanged and cannot be altered by a later revised term. Additionally, Amazon is bound by the duty of good faith. So even if it can alter the agreement freely, this right is subject to limitations.

These arguments get no traction.

The terms were not substantively unconscionable: Plaintiffs’ substantive unconscionability arguments similarly failed. The court previously addressed plaintiffs’ argument that the unilateral right to amend rendered the agreement illusory. In addition to this, plaintiffs raised two other arguments.

First, plaintiffs argued that the carveout from the arbitration clause for intellectual property claims was one-sided, and in effect allowed Amazon to litigate the claims that were most important to it, while forcing consumers to arbitrate claims that were most important to them. The court finds this unpersuasive, noting that customers include rightsowners who may litigate intellectual property disputes against Amazon. Second, even if this represented some imbalance, this wasn’t a provision that shocked the conscience. It was within the realm of the typical give-and-take in a contract.

Second, plaintiffs focused on a provision voluntarily limiting Amazon’s right to seek attorney’s fees unless the arbitrator found the claims were frivolous. The court rejects this as well. First, it re-states state law on this point. Second, Washington law has a mandatory reciprocal fee provision, so whatever the effect of this provision, plaintiffs get the benefit of it as well. Finally, the provision does not limit plaintiffs right to seek fees in any way.

Although the court finds that it is not “a paragon of consumer protection” it says the agreement is not unconscionable.

To insulate arbitration clauses against unconscionability arguments, companies include a range of “customer-friendly” terms in arbitration clauses. These include, for example, provisions regarding payment of filing fees (which can be expensive comparatively in arbitration), carve-outs for small claims actions, flexibility as to the locale of the proceeding, and ability to participate remotely. Companies also have to elect the type of arbitration procedures (i.e., what flavor of the tribunal’s rules) that apply. Amazon’s terms included many of these provisions and the court cites to them approvingly.

Two other aspects of the terms that were worth noting:

Amazon’s terms are fairly simple and user-friendly. Kudos to them for that. That said, I’m surprised they still don’t take a conservative route on two points we’ve flagged a bunch here: (1) including “we can amend any time” clauses (which I think could be made much more palatable by making any such change prospective only) [Eric’s comment: but the clause bit Amazon’s subsidiary in the ass in 2012, so either Amazon hasn’t fixed their contract yet or they are gambling that ruling is an outlier, which paid off in this case], and (2) not forcing customers to check the box (this came back to haunt Zappos, but strangely, Amazon does not insist on it—perhaps a choice made by their all-knowing UI folks).

This ruling is worth contrasting with the Uber arbitration rulings. I failed to blog those due to their length, but the rulings by Judge Chen in that case are worth reviewing. A big difference between that case and this one is that the Uber case involves employees, which makes enforcement somewhat trickier (and courts more sympathetic). Even an opt out clause did not save Uber’s arbitration clause.

In the end, drafters of terms of service agreements should pay close attention to arbitration clauses. It may be tempting to include some stock arbitration provisions as an afterthought, but this is not a good idea, as they are sure to be picked apart down the road.

(The ruling has been appealed.)