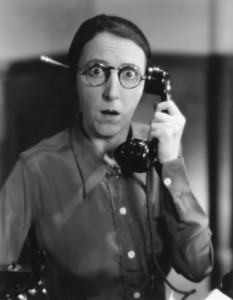 Plaintiffs filed a putative class over fees paid for calls made by inmates in New Jersey correctional institutions. At issue is whether they should be required to arbitrate their claims.

Defendant, GTL, has the exclusive right to provide phone services for inmates so they can communicate with friends and family. A person desiring to create an account with GTL can do so through GTL’s website or through an “interactive voice response” system. Creating an account through GTL’s website requires prospective users to complete the typical process of clicking they agree to GTL’s terms of service. Users who create an account over the phone are merely presented with the following advisory:

GTL’s terms contain an arbitration agreement and a class-action waiver. Customers have 30 days to opt-out of these provisions. The current and previous versions of the terms provided that they could be revised by GTL (with GTL agreeing to post notice of any “material changes” on the site, along with a notice). (The terms look like they’ve been revised again, on March 30, 2015.) Users have 15 days to cancel their account after any revised terms are posted. The terms also provide that continued usage of the service constitutes acceptance of any terms.

Phone Accounts: The court says that the accounts created through the IVR system are subject to the same contract rules as any other medium. The court finds the “browsewrap” cases analogous and says the key question is whether users (1) were provided reasonable notice and (2) “unambiguously” manifested assent.

The court finds the first element satisfied. The system provided notice of the terms. The court briefly hints at the problem that inmates, who may not have Internet access, may not be able to access the referenced terms, but does not find this dispositive. In the court’s view, so long as users are tipped off to the existence of terms and how they can be accessed, this is sufficient.

However, GTL’s argument fails on the second point: users are not required to affirmatively manifest their assent. The court, again analogizing to browsewrap cases, says that silence can constitute assent, but this requires the offeror (GTL) to have made this clear in the first place. That was not the case here. Accordingly, there was no enforceable agreement between GTL and those plaintiffs who created their accounts over the phone, and those plaintiffs cannot be forced to arbitrate.

Online Accounts: The court characterizes the online account creation process as a “clickwrap”. The one plaintiff who created here account online was presented with the terms and “was required to click an ‘accept’ button in order to [successfully create her account].” As to online accounts, GTL has an enforceable agreement that contains an arbitration clause.

GTL’s service was not the only method by which it was possible to contact inmates. Putting aside in-person visits and mail, inmates could have communicate through collect calls or by the use of funds deposited in their commissary accounts, both of which would allow the inmate to call directly. Focusing on the arbitration clause, Plaintiffs were provided thirty days in which they could opt-out of both the arbitration and the class-action waiver provisions. Where parties have a choice, but fail to act upon it, it cannot be said that they were deprived of their ‘unfettered will’.

Finally, the court also rejects plaintiffs’ waiver argument and GTL’s request for a stay. On the waiver issue, the case has been pending since 2013, but 13 months of the case were spent on a motion regarding jurisdiction [the jurisdictional motion was in the court’s hands for 9 months!].

Companies often don’t get the online contracting process right, leaving them vulnerable. (Zappos is probably the most prominent example, but there are others, such as Barnes and Noble.) But they seem to have a particularly hard time with off-line transactions, or those that have an off-line component. (See, e.g., Clearwire; Sirius; Trilegiant; 23andMe; Jawbone.)

Even assuming the plaintiff was presented with the telephonic version of a click-wrap agreement, you wonder how skeptical courts should be about this as effective contracting. Interestingly, the court chose to rule on the basis that prospective users were not advised that proceeding would constitute assent to the terms, but the court glosses over the fact that users may not have any way to even access the terms. It is commonly said that the biggest lie users tell online is that they have read and agree to the terms, but there is not even an attempt at pretense here. (Some decisions have asked whether an arbitration clause is prominently presented (e.g., Mohamed v. Uber). Plaintiff made a similar argument here, but the court dismisses it in a footnote.)

The court does not discuss unconscionability, instead focusing on duress. Perhaps this is a quirk of New Jersey law, but if anyone could effectively raise an unconscionability argument you would think it is prisoners who are agreeing to an arbitration clause and class-action waiver imposed by the company who is the exclusive phone service provider for inmates! The court makes it seem like inmates have several other ways to use phone services, but even a casual outside observer with no experience with the prison system knows that securing the basics for prisoners can be a challenge. Because the court does not focus on unconscionability, it does not evaluate many of the ameliorative provisions companies include in terms of service agreements (such as an opt-out).

* Did the court really say that not hanging up the phone could constitute silent acceptance if GTL had simply made that expectation clear? Prisoners may not have physical liberty, but I guess they still have btheir freedom to contract. I think this case shows just how hard it is for “-wrap” contracts to fail in court.

* Once again, the clickwrap/browsewrap nomenclature does little help the court’s analysis. If you are using the “wrap” vernacular when discussing contracts, UR DOIN IT WRONG.