I sent the following email to a reporter covering the fallout from General Mills’ amended legal terms to mandate arbitration and the The New York Times’ coverage, When ‘Liking’ a Brand Online Voids the Right to Sue (and see the murky follow-up):
____ 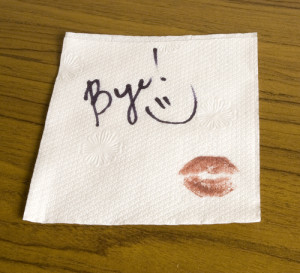 Say hello to trans-fats, say goodbye to your health and your legal rights. Photo credit: Word Bye, lipstick and a smiley face on the napkin // ShutterStock

What’s unusual about General Mills’ move is that we haven’t seen such a broad-based waiver from a consumer packaged goods company. Most consumer packaged goods companies don’t have a direct relationship with their customers. The retailers typically have the front-line contact with the customers. That makes it harder for the consumer packaged goods companies to impose new contract terms on customers. Here, General Mills is using a direct point-of-contact with its customers–its web interactions–to create new contract terms that would be difficult or impossible to impose through the normal distribution chain. Also, some folks feel that the consumers’ benefits being offered by General Mills–a few pennies saved here or there–aren’t commensurate with the potential loss of a large financial payoff if there’s manufacturer malfeasance.

It’s hard to see how class action waivers benefit consumers directly. After all, individual customers’ lawsuits against consumer packaged goods companies are rarely financially tenable, so either lawsuits are brought on a class basis or not at all. At the same time, consumers often don’t benefit from class action lawsuits brought in their name. The class action lawyers take a big chunk of any winnings, and it’s difficult or impossible to provide direct financial benefits to purchasers of consumer packaged goods (after all, the manufacturers and retailers rarely know who they are). So one theory is that manufacturers benefit from class action waivers because they avoid legal accountability for their bad business decisions. Another theory is that class action waivers reduce manufacturers’ costs, and those cost-savings are reflected in lower prices to consumers. It’s hard to know which story is more correct. Probably a little bit of both.

My big question is whether General Mills is properly forming a contract online with its customers. Typically, contract terms aren’t binding online unless consumers “click through” the terms. I haven’t been able to tell if General Mills is handling the technological implementation properly. If it’s not, then the terms aren’t legally binding. Even if the terms are legally binding, there’s an evidentiary question of how General Mills will show which consumers clicked through and which didn’t. One possibility is that General Mills will argue that the “did a consumer click through?” question is itself not susceptible to class adjudication, in which case this move will give General Mills a different way of trying to defeat class certification.
____

1) I have to imagine there will be a strong legislative response if more consumer packaged goods companies move to adopt class action waivers. This is the kind of consumer issue that garners spotlights for legislators, and thus prompts legislative grandstanding.

2) Our DoctoredReviews website discussed another reason why consumer manufacturers would move to restrict the rights of their customers–in that scenario, to restrict their rights to post online reviews. It’s a comparatively small step from General Mills’ current move to imposing an anti-review clause as we feared.