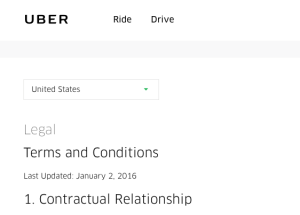 [Note: this is part 2 of TOS Arbitration Day. You can access Eric’s post from this morning here.]

Online terms, and in particular arbitration clauses, have been subject to attack by plaintiffs’ lawyers. News reports have also raised the specter of over-the-top online terms that no one but the lawyers read. However, with the exception of some aberrational decisions, for the most part courts have enforced arbitration clauses, including class action waivers, in properly formed clickthrough agreements.

Cullinane v. Uber Techs.: This is a lawsuit over hidden fees or overcharges for rides to and from Boston’s Logan Airport. Plaintiffs brought a putative class action in Massachusetts state court that Uber removed to federal court under the Class Action Fairness Act. Uber brought a motion to compel arbitration.

The court walks through the account creation process and notes that:

The court says the key question is whether the parties formed a valid contract. In answering this question, the court helpfully “provide[s] a few pages of history,” tracing the development of these types of terms from shrinkwraps to “sign-in-wraps”. The court ultimately finds the taxonomy unhelpful and says that modern contracting practices have not changed the age old rules of a reasonable manifestation of assent coupled with reasonable notice. The court finds that Uber put users on reasonable notice, and plaintiffs manifested assent. Plaintiffs argued that their manifestation of assent was ambiguous since they could be clicking the “I agree” button to create an account rather than to manifest assent, but the court disagrees, by marshaling a roadside fruit-stand analogy:

Keena v. Groupon, Inc.: Plaintiff sued on her behalf and on behalf of a putative class asserting a variety of claims around Groupon’s practice of not honoring refunds for services that were not provided (instead of refunds, Groupon offered gift certificates). Groupon moved to arbitrate the claims.

As with the Uber lawsuit the court looks a the formation process and notes that in creating her account, a user is required to enter her name, and:

The court finds that the agreement is enforceable. Plaintiff argued that the agreement suffered from procedural unconscionability due to the font size and the fact that plaintiff was never presented with a print version but in the court’s view, the plaintiff’s agreement to the online terms undermined these arguments. The fact that the terms are presented via a hyperlink does not alter the analysis and is still sufficient to place a reasonable consumer on notice.

Plaintiff also cited to the disparity of bargaining positions and substantive terms of the agreement but the court is not persuaded by any of these arguments. The fact that the agreement is presented on a take-or-leave it basis does not sway the court. Additionally, the substantive terms plaintiffs pointed to (a one year limitations period, a carve out for IP claims, and “prohibitive” costs) do not sway the court. (Citing to, among other cases, Fagerstrom.)

Finally, plaintiff argued that the clause was illusory, but these arguments get little traction as well. Plaintiff alleged that the class action waiver only worked to the detriment of plaintiff. Ultimately, the court says that illusoriness is not a viable argument because defendant gave up something, even though it may not be precisely equivalent to what plaintiff gave up (defendant waived the right to litigate all but a narrow class of claims). Plaintiff also argued that the agreement was illusory because the service provider (for which services plaintiff purchased the Groupon) did not exist at the time of plaintiff’s purchase. Therefore, Groupon could not have obligated itself to provide the service in question. The court rejects this argument, saying that Groupon’s consideration can take a variety of forms, including promising to make a voucher available that plaintiff could ultimately redeem.

These cases are a good illustration of the importance of a leakproof contracting set up. (See generally, Zappos.) As between the two processes, Groupon’s is more solid, and there is no reason for a company to not take that approach.

Companies have offered a bunch of concessions to customers in an efforts to neutralize unconscionability arguments. Courts cite to these concessions liberally and there appears to be no set formula for what is sufficient. My impression is that where the company appears to “make an effort,” courts are generally swayed.

Courts are clearly sympathetic to the plight of consumers who are forced to arbitrate disputes. Judges are human too! But for the most part, courts take the view that policy arguments are best raised in front of the legislature.

Finally, class action bars have never been expressly blessed by the Supreme Court. But lower courts are extremely reluctant to invalidate these provisions.