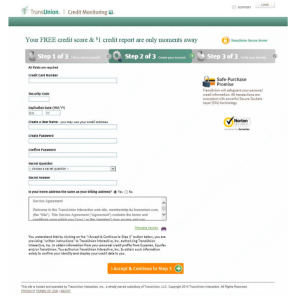 The appeals court describes TransUnion’s user experience and notes that the user was required to take steps to authorize TransUnion to request the user’s financial information (as part of checking the user’s credit). However, TransUnion did not call the user’s attention to the terms of service, much less the arbitration clause. In fact, the court notes that “buried at page 8 of the full, 10-page printable version of the Service Agreement there was a purported arbitration agreement.”

The court says Illinois courts have not tackled the issue of online contracting through a terms of service, but the court looks to cruise ship tickets by analogy. The relevant question is:

whether the web pages presented to the consumer adequately communicate all the terms and conditions of the agreement, and whether the circumstances support the assumption that the purchaser receives reasonable notice of those terms

In other words, would a reasonable person in plaintiff’s shoes have been on notice that she was entering into an agreement when submitting his information?

The court says no, repeatedly chiding TransUnion’s for its contracting set up. In fact, the court says that not only did TransUnion bury the terms of service, it “actively misled” the user. (Cites to Tompkins v. 23andMe and Lee v. Intelius, a data pass case). The court says that the ambiguous nature of the user action (where entering the information does not have the singular purpose of signifying assent) cuts against TransUnion’s position. But even worse, the language above the “I accept” button signals it has a different effect. The language makes no cross-reference to the terms of service:

Having lost its standard formation argument, TransUnion argued that plaintiff accepted the contract by conduct. This argument also failed. The court says that TransUnion did not give the user notice that by continuing to use the site, plaintiff assented to any terms.

The court concludes by saying that online agreements are not difficult to form properly. Sites can do it in a variety of ways, but TransUnion failed to do so here.

Ouch. The number of online contracting cases where courts find companies failed to properly form agreements is surprisingly high. A chunk of those have involved arbitration clauses, which is especially painful for the company in question. We’ve blogged about a bunch of those cases recently. This is one more to add to the list. Given that it’s a federal appeals court case, it will probably join Specht and Nguyen as a widely cited opinion for the proposition that basic contracting principles still apply online, and the best way to form a contract is to force the user to click “I agree” and make this manifestation of assent unambiguous.

(* There have been a bonanza of online contracting rulings of late. We’ll tackle a few more in a blog post coming later this week.)

Eric’s Comments: What a frustrating case! TransUnion could have easily avoided this outcome with a proper call-to-action cross-referencing the terms of service. So close, yet so far.

This case reminded me of the Small Justice v. Xcentric ruling, which had a pretty similar user interface with a big scrollbox of terms that weren’t referenced in the call-to-action. In that case, despite the incomplete call-to-action, Xcentric’s layered notice fortunately redundantly covered the legal point at issue in the case. Not so with TransUnion. Given the cases’ similarity, let’s hope that the TransUnion/Xcentric-style user interfaces (with a scrollbox of terms buried amid other disclosures that dominate the call to action) were a short-lived fad.

More generally, this case is a cautionary tale about the risks of using layered notices. As Venkat notes, the court harshly criticizes TransUnion for “misleading” consumers by emphasizing one aspect of the contractual terms and not highlighting the remainder. Perhaps this would have been fixed by a proper call-to-action incorporating the entire scrollbox of terms, but the court’s cynicism about the potential for summarized terms to mislead consumers deserves the attention of all lawyers working with layered notices.

A positive note: this court bypasses the abysmal browsewrap/clickwrap nomenclature and goes back to first principles of contract formation. That’s the way it should be done, and the court’s legal standard (“whether the web pages presented to the consumer adequately communicate all the terms and conditions of the agreement, and whether the circumstances support the assumption that the purchaser receives reasonable notice of those terms”) is eminently reasonable. It’s also more useful than trying to figure out what -wrap this is/was.