The Ninth Circuit recently considered when consumers assent to terms through interacting with a website: Berman v. Freedom Financial Network, LLC. The court confirms that to ensure enforceability, consumers should (1) check the box and (2) be advised that checking the box will indicate assent to contract terms.

The underlying case is a putative TCPA class action. Fluent is a marketing company that generates leads. With respect to one of the plaintiffs, Fluent’s website (which offered free items) asked the plaintiff to “confirm her zip code”. The zip code was pre-populated and the consumer clicked on a button that said “this is correct, continue! >>”. The second plaintiff was asked to confirm their gender and click “continue”. 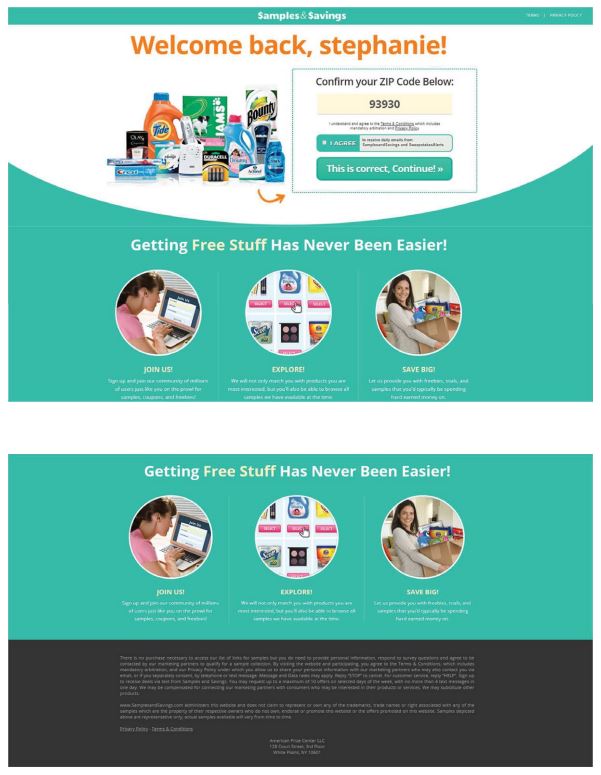 A highly magnified view of the key area from the above screenshot: 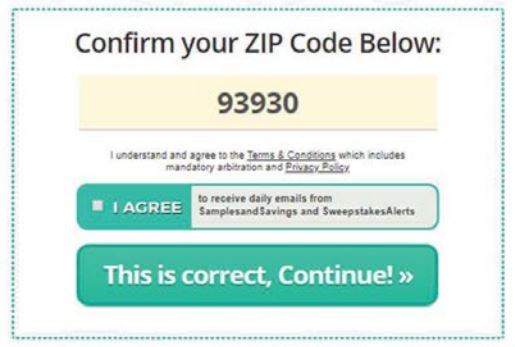 As between the webpage [the other plaintiff] viewed, sandwiched between the buttons allowing Russell to select her gender and the large green “continue” button were the same two lines of text in tiny gray front stating, “I understand and agree to the Terms and Conditions which includes mandatory arbitration and Privacy Policy.” The hyperlinks were underlined but . . . appeared in the same gray font as the rest of the sentence.

A highly magnified version of the key area from the screenshot above: 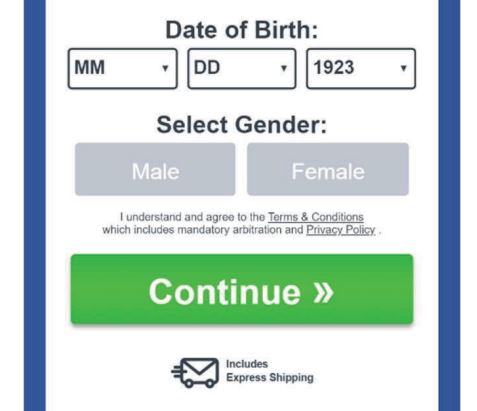 The key question was whether either plaintiff assented to the terms by proceeding. The court says “no”.

The court says that either New York or California law governs, and the result would be the same under either state’s law. Both states require mutual consent. These basic principles “apply with equal force to contracts formed online.” On one end of the spectrum are “clickwrap” agreements which are routinely found to be enforceable. At the other end are “browsewrap” agreements which courts are more skeptical of. Absent a showing of “actual knowledge,” inquiry notice will result in a contract only if (1) the website provides ‘reasonably conspicuous’ notice and (2) the consumer makes an “unambiguous” manifestation of assent. The court says neither condition is satisfied here.

Reasonably conspicuous notice: The court says the text disclosing the terms on the websites “is the antithesis of conspicuous.” Far from drawing a user’s attention to the terms, the presentation “deemphasized” them:

Website users are entitled to assume that important provisions—such as those that disclose the existence of contractual terms—will be prominently displayed, not buried in fine print.

The court even finds fault with the way the hyperlink is presented:

A web designer must do more than simply underscore the hyperlinked text in order to ensure that it is sufficiently ‘set apart’ from surrounding text.

Manifestation of assent: The court is not any more persuaded on the assent issue:

The court notes that the fact that the notice referenced arbitration is not persuasive. The key question is whether the plaintiffs can be deemed to have manifested their assent to the terms in the first place.

Long was an e-commerce case where the website simply failed to present the terms of service and ask a purchasing customer to agree to them. The court cited extensively to Nguyen. Judge Baker says

Long went further and approved Nguyen’s conclusion that if browsewrap is to be enforceable, ‘a textual notice should be required to advise consumers that continued use of a web site will constitute the consumer’s agreement to be bound by the web site’s terms of use.

Sellers v. JustAnswer embraced Judge Weinstein’s taxonomy from Berkson v. Gogo. Sellers was also an e-commerce case where the website buried the website terms of service. The court said it was a “sign-in wrap,” which is enforceable where notice to the consumer is “reasonable.” The court in Sellers also looked to the context of the transaction and specifically whether the relationship is contemplated to be “ongoing.” In that case, the notice was not conspicuous at all.

Long and Sellers teach that, pending further word from the California appellate courts, browsewrap agreements are unenforceable per se; sign-in wrap agreements are in a gray zone; and clickwrap and scrollwrap agreements are presumptively enforceable. And in the gray zone of sign-in wrap agreements, enforceability requires conspicuous textual notice that completing a transaction or registration signifies consent to the site’s terms and conditions. Whether such notice is sufficiently conspicuous will turn on the transactional context, the notice’s size relative to other text on the site, the notice’s proximity to the relevant button or box the user must click to complete the transaction or register for the service, and whether the notice’s hyperlinks are readily identifiable. A court must “[c]onsider[ ] all of these factors” together. Sellers, 289 Cal. Rptr. 3d at 29. [fn 4]

Applying those principles, the context of the transaction here (a one-off) requires that the websites’ notices “must undergo the most rigorous scrutiny.” The theory being that consumers won’t expect the site to have attached terms? Either way, the websites here fail that test.

“Textual notice” is required. A key feature of a “sign-in wrap” agreement is that the text explains to consumers that “acceptance of a separate agreement is required before the user can access the service.”

Judge Baker’s final observation: “for an otherwise conspicuous notice to be effective, it must be unambiguously tied to some act of the website user that manifests assent to the site’s terms and conditions.”

It’s tough to tell precisely what the disagreement is between Judge Baker and the panel opinion.

Which is why it is perhaps odd that the law of online contracts is such an echo chamber of federal court opinions interpreting other federal court opinions. There are relatively few state-court cases with outsized influence in the law of online contracts. But occasionally you’ll find a state-court case that makes you think that maybe that’s due for a change. Enter Truc Do, judge for the Court of Appeals, Fourth District, in California.

I also find it helpful to look at it from the perspective of the type of transaction in question.

Footnote 4 from Judge Baker’s concurrence is worth highlighting:

Given the present state of California law, website designers who knowingly choose sign-in wrap—to say nothing of browsewrap—over clickwrap and scrollwrap designs practically invite litigation over the enforceability of their sites’ terms and conditions, as the fact-intensive inquiry over ‘what makes a given textual notice sufficiently conspicuous . . . invariably lends itself to a more subjective than objective analysis.

I wonder if either side seeks rehearing?

Eric’s Comments: The majority never uses the term “sign-in-wraps” (yay!), but I think most courts nowadays would categorize the defendant’s implementations that way, as the concurrence does. Sign-in-wrap formation processes normally succeed. Why didn’t that happen here? The defendant made three crucial mistakes:

(1) The call-to-action font was too small. “It is printed in a tiny gray font considerably smaller than the font used in the surrounding website elements, and indeed in a font so small that it is barely legible to the naked eye.” As I teach my students, the call-to-action should never be the smallest font on the page.

(2) Underlining words didn’t sufficiently denote hyperlinks. “Consumers cannot be required to hover their mouse over otherwise plain-looking text or aimlessly click on words on a page in an effort to ‘ferret out hyperlinks.'” The court says blue font or all caps would have helped, but other courts have only required an offsetting color, not necessarily blue.

(3) The “call-to-action” was just a declarative statement without the standard if/then grammar. The judges were not willing to read the conditional “if X” part into the text; they interpreted the words quite strictly. The majority doesn’t mention the additional problem in the first screenshot, where a different ask is made between the call-to-action and the action button, but the concurrence does.

Forming online contracts is not rocket science. The court’s concerns were incredibly easy to avoid. The court obviously felt that the defendant was trying to pull a fast one by cutting corners on standard/best practices. The concurrence hammers the point: “Given the present state of California law, website designers who knowingly choose sign-in wrap—to say nothing of browsewrap—over clickwrap and scrollwrap designs practically invite litigation over the enforceability of their sites’ terms and conditions.”

The court doesn’t indicate if the contract would have formed if the defendant had fixed one or two of the three problems. At minimum, it seems like the misdrafted call-t0-action was fatal no matter what.

As Venkat notes, the concurrence tries to boil the rules down to a simple formula: “browsewrap agreements are unenforceable per se; sign-in wrap agreements are in a gray zone; and clickwrap and scrollwrap agreements are presumptively enforceable.” I’m not sure it’s as categorical as this, but the lessons are clear: use a “clickwrap” (2 clicks, not one) and sleep better at night. Don’t give the judges any reason to doubt the drafter’s sincerity or find reasons to reject the formation process. 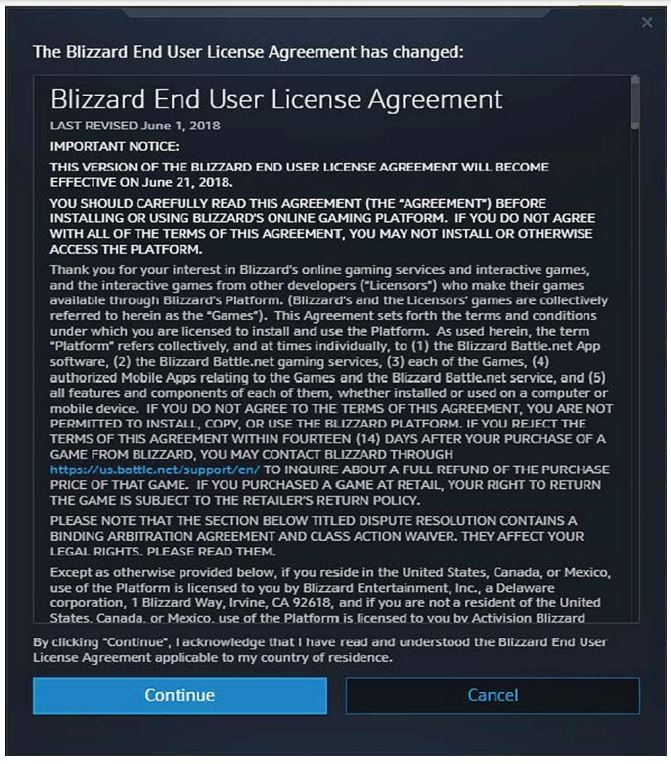 The court characterizes this formation as a “sign-in-wrap” but correctly adds “we need not dwell on the issue because it is the degree of notice provided, not the label, that is determinative.” As you can see, the visible portion of the TOS calls out the arbitration clause. The presentation had a properly phrased and located call-to-action, though we could quibble about font size.

The court relies heavily on the Long and Sellers rulings, showing the precedential power of California appellate court decisions when they are actually published. The court concludes: “the 2018 pop-up notice provided sufficiently conspicuous notice that a user who clicked the “Continue” button at the bottom of the pop-up would be bound by the 2018 License Agreement and the Dispute Resolution Policy incorporated into it… Blizzard’s notice did not rely on a visually nondescript hyperlink—no hyperlink was required to access the 2018 License Agreement (because the entire agreement was contained in the pop-up), and the hyperlink in the Dispute Resolution section stood out in underlined blue text.”