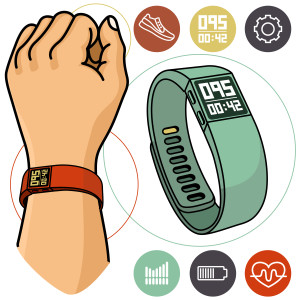 This is a lawsuit against Jawbone, a fitness tracker app, alleging that Jawbone’s battery life was significantly shorter than promised, and that it failed to accurately track and measure movement, calorie expenditure, and sleep:

[plaintiff] appeared inactive when he had actually been active . . . [it appeared according to the device that] he had not slept when, in fact, he had.

Choice of law/Terms of Service: The first question was whether plaintiff, a Missouri resident, could argue that California law applied to his claims.

He argued that the choice of law provisions in the operative agreement required application of California law. But there were two agreements. The “website terms of use” provided that:

[the] Terms of Use and any action related thereto will be governed, controlled, interpreted, and defined by and under the laws of the State of California . . .

The court says that these terms do not require the application of California law because there is no allegation that Jawbone violated the terms, or that plaintiff’s claims are related to the website terms.

Jawbone also has a terms of use for the “service and software,” which users agree to when they download the app (which plaintiff did). These terms say:

[the terms] and your use of the Jawbone Service are governed by the laws of the State of California . . .

The “Service” is defined as “the service that enables you to update and control your Jawbone Device.” There’s a separate definition for “Software” which unhelpfully refers to “the software products made available through the Jawbone Service”.

The court says that the terms are unclear. Although Jawbone has a strong argument that plaintiff does not allege a connection between his allegations of deficiencies in the product and the “Service,” at this stage, the court is willing to let plaintiffs go forward on the basis of California law. The court says it is willing to revisit the choice-of-law issue at the class certification stage.

Underlying Claims: Because the claims are based on fraud, plaintiff is required to plead them with particularity. He achieves mixed results on these.

Battery life theory: The court says that Jawbone alternately advertised the battery life as being “of 10 days” or “up to 10 days” (which are materially different claims). The complaint only alleges reliance on the latter representation, so any claims based on the former are dismissed. However, plaintiff adequately explains how the latter statement is misleading (by explaining the anemic battery life he experienced) and pushes his claim based on battery life over the line.

Product functionality theory: As with the battery life theory, there are varying statements by Jawbone regarding functionality of the product, and the court says that plaintiff cannot maintain claims based on statements that the device would “accurately” measure activity because he did not allege reliance on these. Rather, the model of the device he purchased merely states that it can be used to “measure” and “track” activity. The court says the claim fails, because plaintiff does not allege a total failure of tracking and measurements. (Plaintiff only alleges that the device was not very dependable in its tracking, and this is insufficient.)

The case ended up in the queue because it involved terms of service issues for devices (and software), which is something companies often struggle with. The device or service is bought in the retail context where there is no clickthrough agreement, but there is a software component that requires assent prior to use. But it’s not entirely clear how the clickthrough agreement interacts with the entire suite of services. Kwan v. Clearwire and Knutson v. Sirius are two examples where companies did not properly sew up the contracting process, despite the customer having to access software in order to use the service. Here, Jawbone properly formed a contract (as to the software) with the customer, but it was unclear what the scope of these terms were. The timing of deployment of the terms was also clunky. The customer downloaded the app before ever buying a device, and it was unclear whether the customer needed to register the device and agree to the overall terms for the service while doing so. The case is somewhat similar to the 23andme case, where the contract formation at the point of purchase was imperfect, but 23andme fixed the issue through a later online registration. (“23andMe’s Browsewrap Fails, But Its Post-Purchase Clickthrough Works Anyway–Tompkins v. 23andMe“.)

Interestingly, Jawbone was arguing for a narrow interpretation of the scope of its website terms, which is not something you usually see. (See the Traton News case for an example of a plaintiff going to the other extreme and trying to game a terms of service deployment for personal jurisdiction purposes.) A related point is that class actions raise the question of what law applies, and companies try to cut down the scope of possible classes by arguing that out-of-state consumers should not be able to take advantage of the company’s local law when bringing claims (or argue that the plaintiffs from each state constitute a separate sub-class). This is in tension with the typical choice of law clause in a terms of service, which is usually broad and subjects all claims relating to the site or service to the laws of the company’s home (or another favorable) jurisdiction.

As the court notes, the two sets of terms were clunky at best in describing the device, site, and app, and how they fit together. Not to mention the fact that two different sets of terms could have (but did not in this case, since they were materially the same) resulted in confusion as to what substantive terms applied. Perhaps one possible best practice is for companies to develop default terms for certain classes of customers that apply across the board. This still leaves the problem of integrating the default terms into the app or device-specific terms, but perhaps this can be accomplished via hyperlink.