Contracts are a state-law issue. And online contracts, even though they exist in the friction-less, boundary-less world of the internet, are also generally governed by state-law principles.

But occasionally you’ll find a state-court case that makes you think that maybe that’s due for a change. Enter Truc Do, judge for the Court of Appeals, Fourth District, in California.

Sellers v. JustAnswer LLC involves a putative class action lawsuit related to the operator of a website (JustAnswer.com) that purportedly enrolled customers into an automatic renewal membership without clear and conspicuous notice. In 2020, California passed a law, called the Automatic Renewal Law, that mandates affirmative consent and clear and conspicuous disclosures for automatically renewed payment programs. Plaintiffs signed up and paid $5 to have a question answered, and then they were enrolled in a monthly program that charged them $46 a month. Plaintiffs filed a class action saying they were enrolled without sufficient notice or consent. The operator of the website filed a motion to compel arbitration based on the language of its online Terms of Service (with mandatory arbitration, the class action would not be possible). The Superior Court of San Diego denied the Defendant’s motion to compel arbitration. Defendant appealed.

Here is the web interface: 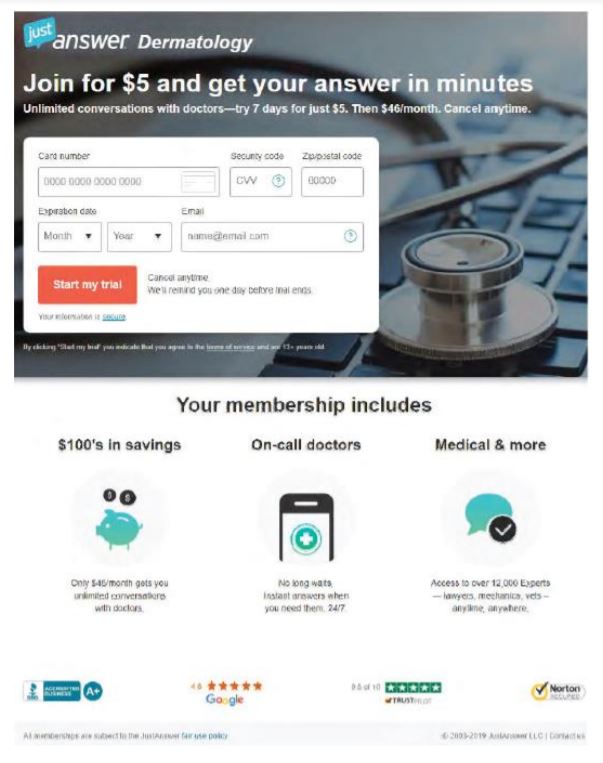 [Eric’s note: the call-to-action is the microscopic white line of text at the bottom-left of the stethoscope photo. The fact you can’t read the text in this screengrab seems pretty decisive, no?].

Here is the mobile interface: 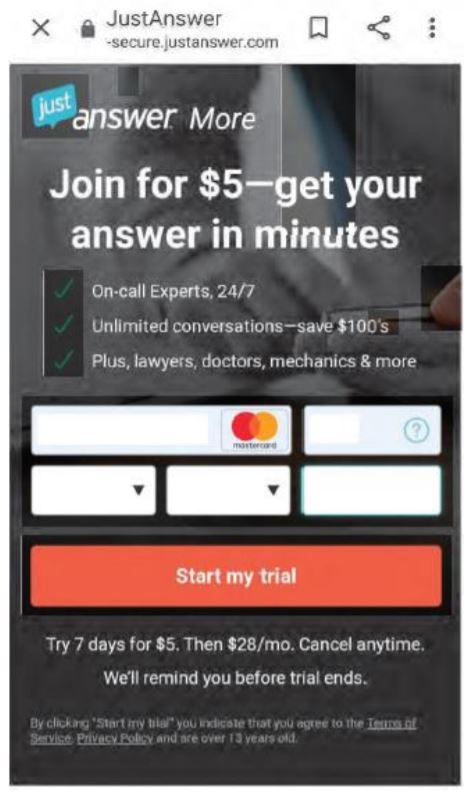 JustAnswer argued that its Terms of Service was a “sign-in wrap agreement,” and that “federal courts applying California law ‘have held that this type of display of a hyperlinked notice to the terms of service suffices to put a user on inquiry notice of an arbitration agreement.”’

Judge Do said that the classification of web-based contracts alone does not resolve the question of whether a plaintiff has legally sufficient notice of contractual terms. And that while plenty of federal courts have interpreted California law on issues related to online contract formation, according to Do, only one California case had previously done so (Long v. Provide Commerce, Inc. (2016) 245 Cal.App.4th 855, 862, 200 Cal.Rptr.3d 117 (Long).).

The court goes on to note that while it would be nice to have a bright-line rule around the enforceability of sign-in wrap agreements, prior federal court cases don’t provide clear guidance on whether a user has sufficient notice. And so the determination of whether an online agreement is enforceable comes down to fine gradations of text, color, location, obviousness, and other forms of context.

Even text that is just slightly smaller, or slightly further away from the box or button the consumer must click on must, at some point, exceed the limits of what constitutes adequate notice. (See, e.g., In re Ring LLC Privacy Litigation (C.D.Cal., June 24, 2021, No CV 19-10899-MWF (RAOx)) 2021 WL 2621197, Appendix [showing progression from clickwrap to sign-in wrap and associated textual notice moving further away from the sign-in or sign-up button].) Here, JustAnswer chose to use a textual notice attached to a hyperlink as opposed to a pure clickwrap or scrollwrap form, and then chose to display that notice in extremely small print and not immediately adjacent to the “Start my trial” button. By doing so, JustAnswer ran the risk of a court concluding, as we do here, that the notice was not sufficiently conspicuous.

Plaintiffs win the appeal and get to move forward with their class action.

This case is hardly a radical departure from prior precedent. But it is one more state-court precedent denying enforceability of an online agreement with a weak claim to a mutual manifestation of assent. And it does express skepticism about the general trend toward enforcing online agreements in the absence of a clear mutual manifestation of assent. This opinion further supports Eric’s recommendation that website owners use a 2-click process to ensure enforceability of their online agreements

Federal court judges are required, under the Erie doctrine, to apply state substantive law when exercising supplemental or diversity jurisdiction over breach of contract cases with online agreements. Since federal courts often look to the 9th Circuit for guidance on internet law issues, and since California has such outsized influence on the 9th Circuit, it will be interesting to see if this case reverberates throughout the federal echo chamber.