Selden sued Airbnb for racial discrimination. Airbnb invoked its arbitration clause. Five years ago, the district court sent the case to arbitration. Selden lost the arbitration because a room in an owner-occupied, single-family residence isn’t a public accommodation (similar to the Roommates.com denouement). Post-arbitration, he appealed the district court’s arbitration ruling. The DC Circuit affirms.

This is Airbnb’s iPhone registration screen at the time: 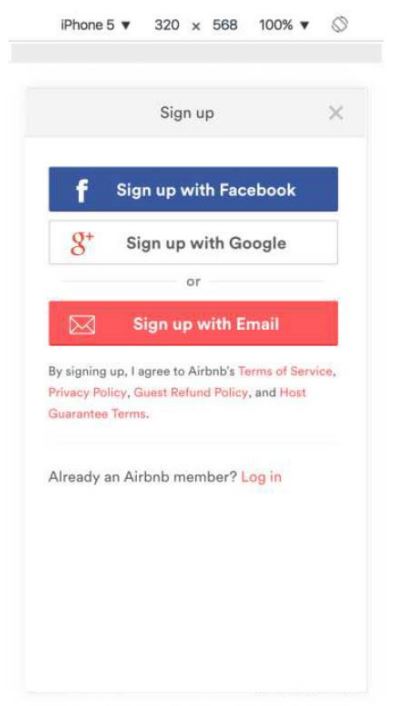 Selden signed up by connecting with his Facebook account. Airbnb automatically used his Facebook avatar as Selden’s Airbnb avatar, which showed his race. (Airbnb no longer requires a profile photo, in part due to the lessons from cases like this). After a host denied his reservation request, he tried again with fake accounts showing Caucasian profile photos, which were accepted. He shared this story on social media with the “#airbnbwhileblack” hashtag, which went viral.

To bypass the arbitration clause (and the resulting adverse arbitration determination), Selden argued that Airbnb’s TOS wasn’t properly formed. Calling the formation process a “sign-in wrap” (ugh), the court replies simply: “We hold that Selden agreed to arbitrate his claims against Airbnb because he had reasonable notice of the Terms of Service and the arbitration clause therein.” The court explains:

Airbnb’s screen used a simple design. It had three buttons allowing users to sign up using Facebook, Google, or email. Directly below the three buttons, it stated: “By signing up, I agree to Airbnb’s Terms of Service, Privacy Policy, Guest Refund Policy, and Host Guarantee Terms.” These terms and policies appeared in red text against a white background and were hyperlinked to the full policies. Moreover, the sign-in appeared on a single screen for an iPhone user like Selden and required no scrolling to see the notice of the Terms of Service.

Selden argued that he was confused by the hyperlinks being in red font, not blue. The court replies sharply: “Reasonable notice does not turn on where the hyperlinked text falls on the color wheel; rather we consider whether the text was conspicuous.” The court says it was conspicuous because other links were also in red and the legal policies were properly set off from the rest of the page.

Selden said he was also confused by the three different signup button options and their separation from the legal text. The court replies: “The buttons appeared in close proximity to the notice and on a single screen. A reasonable person would know that, by signing up, he would be agreeing to Airbnb’s terms even if he used his Facebook account to sign up.”

Overall, a nice and unsurprising result for Airbnb. Still, looking at this design, I think Airbnb could easily make some minor tweaks to improve it. Most obviously, adding a second click to agree to the terms would be airtight.