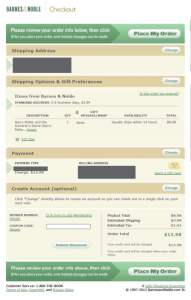 This is a lawsuit over Barnes & Noble’s alleged failure to honor its closeout advertisements for Hewlett-Packard Touchpads. (Coverage of the district court ruling here: “Barnes & Noble’s Online Contract Formation Process Fails–Nguyen v. Barnes & Noble.” Plaintiff (Nguyen) placed an order and when he was informed that B&N cancelled the order, he alleged he was “forced to rely on substitute tablet technology, which he . . . purchased [at] considerable expense.” B&N moved to compel arbitration on the basis of an arbitration clause contained in the website’s terms of use.

There was no check-the-box for Nguyen to click. B&N relied on language in the terms to the effect that Nguyen was “deemed to have accepted” the terms by using the site or making a purchase. Unfortunately for B&N, that does not turn out to be true.

The court says there are two types of online agreements: (1) “clickwrap” agreements, which require users to click on an “I agree” box, and (2) “browsewrap” agreements, where the online terms are posted on the bottom of the webpage. The hallmark of a browsewrap agreement is that a user can use the site or services “without visiting the page hosting the . . . agreement or even knowing that such a webpage exists.” Because the user is not required to express her assent as a condition of proceeding, enforceability of the latter types of agreements depend on whether a user has actual or constructive notice. 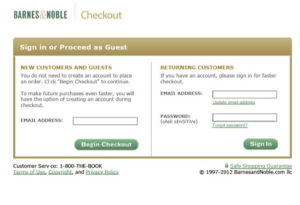 The court contrasts other cases where the user was found (or deemed) to have actual notice (such as Southwest Airlines and Ticketmaster) due to defendants’ access of a website following a cease and desist notice. Because there is no evidence Nguyen had this type of actual notice, whether B&N’s online terms are enforceable depends on whether “a reasonably prudent user” would be on inquiry notice upon using the site. This in turn depends on where and how the terms are presented. Where the terms are inconspicuous or below the fold, there is no inquiry notice. (Zappos; Hines; Specht.) In contrast, where there is “explicit textual notice,” courts may be more willing to charge a user with notice. Here, the court says that the link to B&N’s online terms is not buried, and it’s likely that the link would be in the field of vision of a user proceeding with checkout. But in the court’s eyes, this is not enough. The court seems to say that there should be “something more” drawing the user’s attention to the terms, such as contrasting text or a warning:

Where a website makes its terms of use available via a conspicuous hyperlink on every page of the website but otherwise provides no notice to users not prompts them to take any affirmative action to demonstrate assent, even close proximity of the hyperlink to relevant buttons users must click on—without more—is insufficient to give rise to constructive notice.

Finally, B&N points to Nguyen’s personal website which was supposedly governed by similar browsewrap terms, and says he should be familiar with these types of terms. The court dismisses this argument.

Yikes! A panel of 9th Circuit judges micromanaging the “design and content” of a website is just what we need.

As Eric noted in his post about 23andMe’s browsewrap gaffe, “cross-referencing the TOS during checkout would have been a trivially easy step that would have been 100% legally effective.” One big recent case where an e-commerce company failed to achieve a leak-proof contract implementation is Zappos.com. This is another one to add to the list. Where the company engages in a transaction or requires the user to create an account, there is little reason for this to not be buttoned up.

It’s tough to have sympathy for Nguyen, who is just trying to take advantage of an online inventory gaffe on the part of B&N. On the other hand, as a company that’s trying to foist arbitration on a likely unwitting consumer, B&N is not terribly deserving of sympathy either. While a consumer’s true-to-life assent to a terms of service in an online transaction is a legal facade, the least B&N could do is to play along and require us to check the box saying we’ve read and agreed to it.

The court’s opinion seems to say that while a leakproof implementation is obviously enforceable, some sort of conspicuous notice may do the trick as well. I’m not sure I would recommend that anyone test the contours of this rule. Also, this rule will likely be of little value: if you’re going to go through the trouble of having “conspicuous” notice, why would you not just have a check the box? In any event, as Eric notes below, the opinion muddies up the waters unnecessarily.
___

Eric’s Comments: This is a lousy opinion. The result is fine, but the court’s exposition unnecessarily messies up online contract formation.

I believe there are two types of online terms: mandatory clickthrough agreements and everything else, which I’ll call “things that aren’t contracts.” The effort to give effect to the terms clickwraps and browsewraps leaves gaps that create the possibility of a tertium quid with unknown legal effects. I also blame the “-wrap” lingo, which I think has single-handedly hindered the development of online contract law for years (see, e.g., my discussion about Fteja). No one understands exactly what a “clickwrap” or “browsewrap” is, so the semantic imprecision gives courts extra room to make doctrinal mistakes. For example, the court says:

where the website contains an explicit textual notice that continued use will act as a manifestation of the user’s intent to be bound, courts have been more amenable to enforcing browsewrap agreements

What will it take to convince you that we should retire the clickwrap/browsewrap language? If you use the browsewrap term regularly in any context other than to mock it, I apologize if this sounds harsh, but I think you’re part of the problem, not part of the solution.

Irrespective of the phrasing ambiguity, this is a tough case mostly because B&N came close to forming a clickthrough. It had a mandatory click to place the order, and it had a link to “Terms of Use” near the order placement button. The court seems to be saying that the phrase “Terms of Use” isn’t a strong enough call-to-action to convert this presentation into a clickthrough agreement. Fair enough; it’s easy enough for B&N and other websites to improve the call-to-action language.

Unfortunately, the court treats this as a browsewrap/placement problem, rather than a call-to-action problem. Both issues undermine notice to consumers, but they are analytically separate problems. For example, you could have a great call-to-action in an invisible place (like Specht, where 2 screens away AOL had the right “if X, then Y” phrasing), or you could have prominent disclosure with a poor call-to-action (like this case). Because the court never grasped the different problems with notice, the court repeatedly misuses the phrase “browsewraps” to inaccurately describe things that should be considered clickthroughs; and the court fails to emphasize the importance of the call-to-action language. For example, the court explains the factors to consider when determining if users got sufficient notice:

the conspicuousness and placement of the “Terms of Use” hyperlink, other notices given to users of the terms of use, and the website’s general design all contribute to whether a reasonably prudent user would have inquiry notice of a browsewrap agreement.

Note what’s missing from that list: the call-to-action language…even though in other parts of the opinion, the court cites examples where a stronger call-to-action improved enforcement. Whoops.

The court’s confusion about placement vs. call-to-action muddles the court’s holding:

where a website makes its terms of use available via a conspicuous hyperlink on every page of the website but otherwise provides no notice to users nor prompts them to take any affirmative action to demonstrate assent, even close proximity of the hyperlink to relevant buttons users must click on—without more—is insufficient to give rise to constructive notice

B&N did provide notice of its terms to users; it just did so using poor language. So saying B&N provided “no notice” is just wrong. This holding means that future litigants will battle over murky questions of what the consumer knows or should have known about the terms, even when this case really turned on a simpler question: the clarity of the call-to-action language. As a result, the court sets up the possibility that non-clickthroughs can still be binding:

Were there any evidence in the record that Nguyen had actual notice of the Terms of Use or was required to affirmatively acknowledge the Terms of Use before completing his online purchase, the outcome of this case might be different

Note how the plaintiffs very likely could snatch defeat from the jaws of victory. The court’s messiness may block class formation because determining if a class member had “actual notice” probably requires individualized adjudication. Cf. Judge Koh’s class certification denial in the Gmail case. Whoops #2.

All told, this case creates some loose threads that will cost plaintiffs and defendants more money to adjudicate without any countervailing doctrinal benefits. Yay for waffly appellate decisions! Still, there is good news in this case: the opinion doesn’t undermine the enforceability of bona fide clickthrough agreements. So the best practices advice remains the same as always: set up an airtight clickthrough agreement with a proper call-to-action proximate to the clickable button, and you’ll substantially increase the odds that your contract enforceability won’t depend on the capriciousness or sloppiness of Ninth Circuit judges.