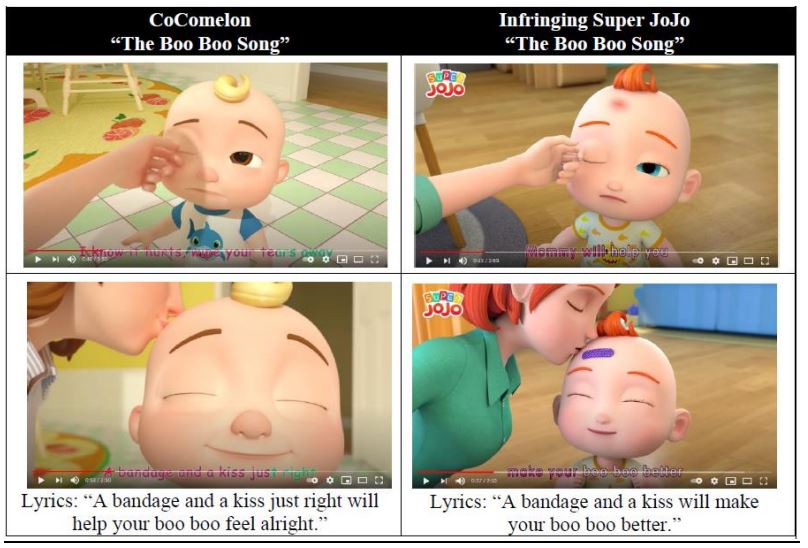 Material Misrepresentations. “Moonbug’s DMCA notices to YouTube were accompanied by a 17-page letter along with 80-pages of exhibits providing a detailed list of infringed works, references to at least four additional copyright registrations, and analysis and examples of copying, including allegations of frame-by-frame copying, near-identical thumbnail art, copying of two series of original songs (including the same titles, melodies, lyrics and stories), and ‘copying of the plot, setting, pace and sequence of events of other CoComelon videos.'”

With respect to whether Babybus’ baby character infringed Moonbug’s baby, Babybus claimed that the alleged copying related to generic features found in nature. The court says:

As Moonbug extensively alleged in its letter to YouTube accompanying its DMCA notices, its infringement allegations did not simply target JoJo’s large head, positivity and curiosity or family structure. Rather, it examined Babybus’s duplication of a wide collection of features of the CoComelon characters and videos, as well as other recognizable features of the CoComelon franchise such as conceptual qualities like family dynamics, character animation styles and movement, and video plots, pace, themes, moods, and settings, as visible from screenshots and videos

Also, Babybus “removed from public view over 100 of its allegedly infringing videos within one day of Moonbug filing notices and accompanying letter with YouTube.”

Subjective Bad Faith. “Plaintiff’s takedown letters and supporting document establish facially plausible claims of infringement, and Babybus does not allege a plausible basis for a fair use defense.”

Even though knockoff cases usually pose a risk of overclaiming, Babybus’ 512(f) claims looked harder to justify than the normal 512(f) cases I see due to Moonbug’s careful preparation of the takedown notices.