Video Excerpts Qualify as Fair Use (and Another 512(f) Claim Fails)–Hughes v. Benjamin 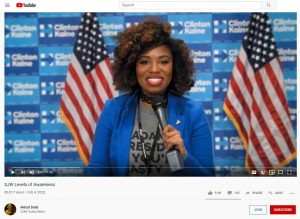 Hughes is a YouTuber. She made a 10 minute video of Hillary Clinton’s election night party called “We Thought She Would Win” and posted it to her channel. Benjamin also is a YouTuber, but on the opposite end of the political spectrum. He created a 2 minute video called “SJW Levels of Awareness,” which consisted solely of 6 excerpts from Hughes’ video without any additional commentary. He posted this video to his channel, which contained other videos criticizing the Left, feminists, and Black Lives Matter. Hughes sent a takedown notice to YouTube, which YouTube honored. Benjamin counternoticed, which YouTube apparently honored as well. Hughes sued Benjamin for copyright infringement and a 512(f) violation due to his counternotice. The court dismisses both claims.

The court says Benjamin’s video is fair use.

The fact that Benjamin’s use qualified as fair use necessarily implies that his counternotice didn’t misrepresent. That’s a pretty legit reason for the 512(f) claim to fail, but still, chalk this case up as another 512(f) loss.

I think this is a significant ruling. The judge says that a video composed solely of excerpts of a precedent video can qualify as fair use on a 12(b)(6) motion to dismiss. Fair use rulings on a motion to dismiss are relatively rare; such rulings when the defendant didn’t add any commentary (other than the title) strike me as even rarer. In contrast, the rules are not as clear-cut when it comes to reaction videos. For example, the Hosseinzadeh v. Klein ruling also found fair use, but only on summary judgment, even though the criticism/commentary was so much more evident than with Benjamin’s video. Furthermore, we’ve seen courts struggle with videos that include brief depictions of third party screenshots, even though those cases are ridiculous. So it wasn’t at all obvious that Benjamin would get a 12(b)(6) motion to dismiss. I think that will help future defendants.

Still, I can see why others might view this ruling as troubling. First, Benjamin’s channel content is normatively objectionable to many people, including me, so it’s tempting to want IP law to condemn it. I felt that way in the Goldman v. Breitbart case, where I couldn’t believe that I was actually rooting for Breitbart (only on the legal merits, but still…). However, if you’re a fair use advocate, you have to embrace its application even when the defendants have odious views. Second, there is an obvious race and gender dimension to this case. Hughes is an African-American female, and the judge applied a very broad conception of fair use to her copyright. If plaintiffs with different demographics had made identical claims, would fair use be interpreted equally expansively against them? I could see why folks in the critical studies community might wonder about this, even though the opinion didn’t evidence any bias, and I think it reached the right result.

UPDATE: The judge awarded Benjamin $38k in attorneys’ fees per 17 USC 505, even though Benjamin also raised a legal defense fund of $120k via GoFundMe (and now I’m wondering where that money will go). As I read the attorneys’ fee opinion, the critical studies critiques of this case kept nagging at me. As before, the opinion exhibited no obvious bias and was well-grounded in the law. Yet, I can’t help but wonder whether a fee shift would have been awarded if the plaintiff was a white male and the defendant a black female.

← Google Search Qualifies For Section 230, Whether or Not It’s a “Platform”–Chukwurah v. Google
Can a Retweet Constitute Copyright Infringement? Uh….–Bell v. Chicago Cubs →
Subscribe to Blog via Email
Categories