We don’t see that many 17 USC 512(f) lawsuits over bogus copyright takedown noties, and we see even fewer successful ones. Here’s another failed one. 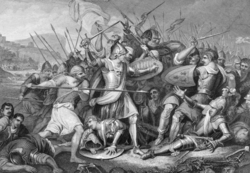 I hate it when bloggers attack each other rather than finding a way to get along. After all, the rest of the world hates us as bloggers, so why can’t we bond together in solidarity? C’est la vie.

This pair of dueling bloggers come from the highly charged community discussing home birthing. The doctor believes home birthing increases neonatal deaths, the doula disagrees. In a literal F-U to the doctor, the doula blogged a photo with (as the court described it) a “graphic gesture with her middle finger that is often associated with an unrealized ambition of French soldiers at the Battle of Agincourt.” [FN] The doctor copied the photo and posted on her blog. The doula sent a takedown notice to the doctor’s web host. Some more background on this case.

</a >[FN] I’m not an expert in the famous Battle of Agincourt, but I believe there’s some controversy whether English longbowmen gave French enemies a one- or two-fingered salute/taunt; the latter being what we now call the V sign. So I’m not sure the court’s historical allusion is accurate. Just in case there’s any doubt, the doula is definitely not making the V sign.

The doctor brought a 512(f) claim for the takedown notice to her host. The doula tried to dismiss the 512(f) lawsuit on jurisdictional grounds, but the court (apparently sue sponte) says that it needs to address Article III standing to avoid the “thorny” Internet jurisdiction questions. It’s the most bizarre Article III analysis I’ve seen. The court says it seriously doubts the doctor has a viable 512(f) claim. How hard is it to win a 512(f) claim? The court says the doctor has “plausible” fair use and implied license defenses to a copyright infringement claim, suggesting that perhaps the doula didn’t adequately consider those doctrines. No matter. The court says:

there is no requirement in the DMCA that a notice-giver inform the service provider of an infringer’s possible affirmative defenses, only that she affirm her good faith belief (as appears to be the case here) that the copyrighted material is being used without her (or her agent’s) permission

Apparently satisfied the doula did that, the court says the doctor’s cause of action isn’t viable. The tortious interference similarly fails based on the apparent legitimacy of the doula trying to enforce her copyright.

Having made a ruling on grounds that the parties didn’t brief or argue, the court gives the doctor 21 days to object to this ruling. Given the acrimony underlying this lawsuit, the doctor will surely object. The court will then slam the door on her 512(f) lawsuit, with the inevitable appeal to follow.

[Photo Credit: Battle of Agincourt in 1415 and Hand showing the sign of victory// ShutterStock]