In January, Zappos (part of $AMZN) announced a massive data security breach affecting 24 million consumers.  As typically happens in these situations, plaintiffs’ class action lawyers swarmed over Zappos for the breach, filing dozens of lawsuits.  Zappos tried to send the lawsuits to arbitration based on an arbitration clause in its user agreement.  Recently, a federal court struck down Zappos.com’s user agreement, denying Zappos’ arbitration request.  This is an unfortunate ruling for Zappos, because its contract–now dead–would have been quite helpful in combating this high-profile and potentially very expensive data security breach lawsuit.   More importantly, the mistakes Zappos made in its user agreement–though common throughout the Internet–are completely and easily avoidable.  This post will make some suggestions for how to avoid Zappos’ fate.

In contrast, “browsewraps” are user agreements that purport to bind users simply because users browse the website.  I don’t use the term browsewrap; instead, I prefer to call those documents “not a contract.”  Although there are some aberrational cases to the contrary, for the most part courts do not treat browsewraps as a contract, and anyone relying on a so-called browsewrap does so at their extreme peril. 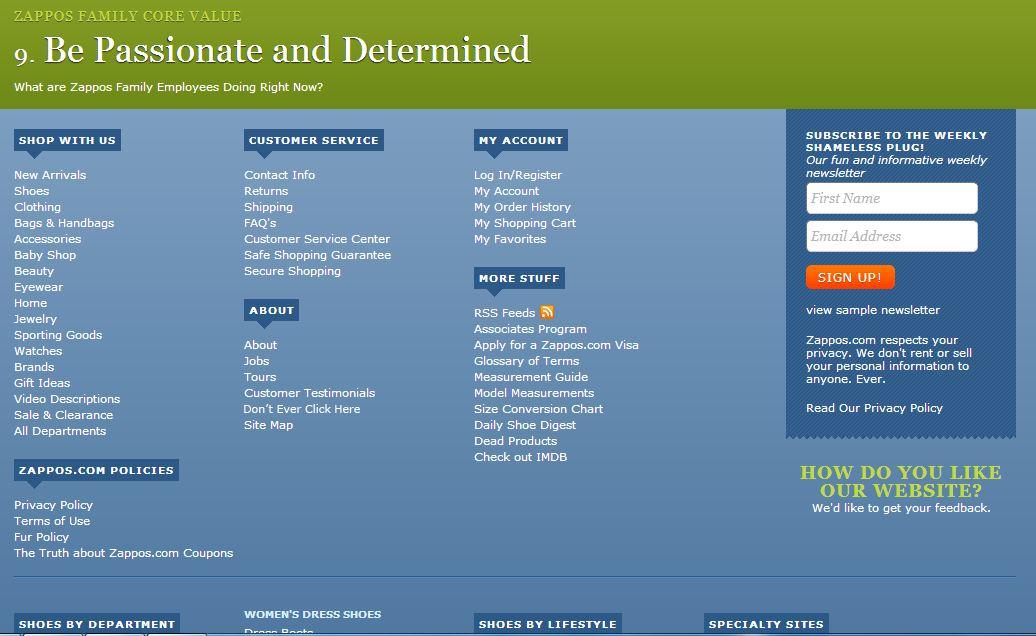 According to the court, Zappos presented its “terms of use” as a browsewrap.  You can see the implementation from this screenshot snippet above–look for the obscure link entitled “terms of use” on the left side.  (As the court notes, if you printed out the home page of Zappos.com, this snippet would be on page 3 of the 4 page printout).

The court does not have kind words for Zappos’ implementation:

we cannot conclude that Plaintiffs ever viewed, let alone manifested assent to, the Terms of Use. The Terms of Use is inconspicuous, buried in the middle to bottom of every Zappos.com webpage among many other links, and the website never directs a user to the Terms of Use. No reasonable user would have reason to click on the Terms of Use, even those users who have alleged that they clicked and relied on statements found in adjacent links, such as the site’s “Privacy Policy.”

Later, the court reinforces how unimpressed it is with Zappos’ browsewrap argument:

The arbitration provision found in the Zappos.com Terms of Use purportedly binds all users of the website by virtue of their browsing. However, the advent of the Internet has not changed the basic requirements of a contract, and there is no agreement where there is no acceptance, no meeting of the minds, and no manifestation of assent. A party cannot assent to terms of which it has no knowledge or constructive notice, and a highly inconspicuous hyperlink buried among a sea of links does not provide such notice. Because Plaintiffs did not assent to the terms, no contract exists, and they cannot be compelled to arbitrate.

Zappos Reserved the Right to Amend the Contract Whenever It Wanted 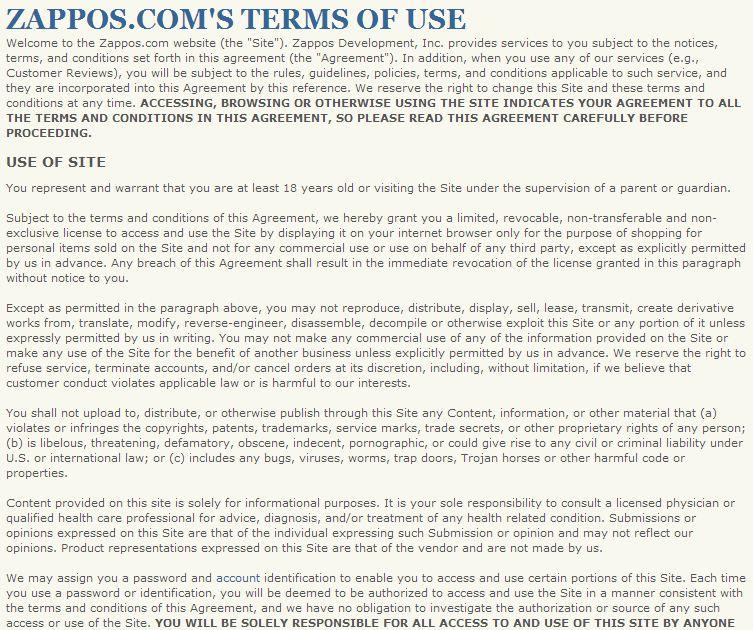 As you can see from the screenshot snippet above, Zappos’ terms of use says “We reserve the right to change…these terms and conditions at any time.”  Zappos isn’t the only website using language like this; it’s ubiquitous on the Internet.  Unfortunately, despite its widespread usage, this language is toxic to a contract.

Zappos can hardly be surprised by this adverse judicial ruling.  We have known for years that browsewraps are unenforceable (see some of the cases discussed here) and judges clearly dislike unilateral amendment clauses (see, e.g., the uncited Ninth Circuit’s Douglas ruling  from 2007 and the cited 2009 ruling in the Blockbuster/Facebook Beacon case).

Still, the ruling leaves Zappos in a bad position.  Its contract is legally irrelevant, meaning that all of the risk management provisions in its contract are ineffective–its disclaimer of warranties, its waiver of consequential damages, its reduced statute of limitations, its clause restricting class actions in arbitration…all of these are gone, leaving Zappos governed by the default legal rules, which aren’t nearly as favorable to it.  Losing its contract provisions meant Zappos is legally naked.

Avoiding this outcome is surprisingly easy.  Use clickthrough agreements, not browsewraps, and remove any clauses that say you can unilaterally amend the contract.

Using Clickthrough Agreements.  Zappos had an easy way to form a clickthrough agreement.  As shoppers are checking out of the store with their shopping cart, Zappos could say “By clicking the ‘purchase’ button, you agree to the Zappos terms of use” with a link to the document.  It’s as easy as that.  No custom coding, no interstitial web pages, no real risk of abandoned shopping carts.

Even if you aren’t an e-commerce site, it’s still easy to form a clickthrough agreement if you have an account registration process.  Right before users complete the registration, present the terms as “By [creating an account], you agree to the user agreement” with a link to the document.

Thus, the only websites that can’t easily implement a clickthrough agreement are sites that have no checkout or registration processes.   Websites in that category should carefully consider why they need a user agreement at all.

No Unilateral Amendment Clauses.  If you are changing the user agreement only for new users who enter into the contract after the change, you don’t need to tell them that you’ve amended the terms.  They are automatically bound to your then-current terms when they click through.  If you form a contract with your users each time you interact with them (such as with an e-commerce site), you aren’t “amending” your contract; you’re just changing the terms for subsequent transactions.

In contrast, if you are providing ongoing services to users and you want to change the deal with them, then you need to amend the existing agreement.  Unfortunately, there is no reliable legal way to do so other than to require users to click through the new terms–an imperfect solution because many existing users never come back to the site, and other users will balk at the request.  And worse, any failed amendment creates a variety of legal vulnerabilities, so you need an airtight amendment implementation.

Thus, to develop a legally effective contract amendment process, you should brainstorm with your attorney about creative solutions that provide flexibility without breaking the law or undermining your contract.   Or, just accept that you can never materially change the contract terms for users who have signed up under a different deal.  You might be surprised how little that limits you in practice.

Either way, Zappos’ loss provides a good warning what not to do: don’t just clone-and-revise the amendment provisions you’ve seen on other sites.  THAT DOESN’T WORK in court, and you’ll be in for an unpleasant surprise if you learn that the hard way.

Disclaimer: this post is just a general discussion about legal topics.  It doesn’t provide legal advice.  Consult your own attorney before making any decisions.