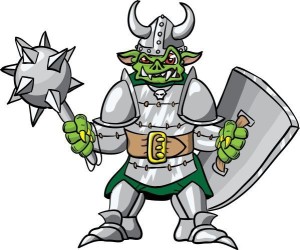 shutterstock – machinegunner: Illustration of an evil goblin in armor and a horned helmet

This is an insurance coverage dispute arising out of a defamation lawsuit. Sindi sued El-Moslimany in Massachusetts alleging that El-Moslimany engaged in a campaign to “embarrass, humiliate, and destroy” Sindi through perpetuating falsehoods. Sindi describes herself as a scientist, entrepreneur, and philanthropist, and she claims El-Moslimany impugned her integrity via Facebook, email, a blogspot blog (truehayatsindi.blogspot.com) and various public events. El-Moslimany supposedly showed up at events with a sign pointing people to her blog that discussed Sindi and her various failings. Allegedly, El-Moslimany described this “campaign” of libel and slander as “operation Arabian EXPOSURE”. Sindi sued for defamation, tortious interference, and intentional infliction of emotional distress and sought a permanent injunction. (Looks like there is a lot to the story, including multiple legal proceedings, and a good starting point may be this link from Jonathan Turley: “Did Harvard’s New Saudi Scholar Try To Have Women Flogged For Revealing Her Affair?“. Read the Seattle Times coverage of the King County Superior Court proceeding raising commenter anonymity issues here: “Judge: For now, Burien woman needn’t reveal critics of Saudi official“.)

State Farm, the insurer, defended the Massachusetts lawsuit under a reservation of rights, and it sought a declaration that it is not required to defend.

The Policy Language: Samia El-Moslimany and her mother have a homeowner’s policy that covers both liability and costs of defense for:

damages because of bodily injury or property damage to which [the] coverage applies, caused by an ‘occurrence’.

An occurrence is defined as:

An accident, including exposure to conditions, which results in:

This definition is later changed to cover “an accident, including exposure to conditions, which first results in [bodily injury or property damage].” (This change does not appear material to resolution of the coverage issue.)

The policy excludes from coverage bodily injury or property damage:

(1) which is either expected or intended by the insured; or (2) which is the result of willful and malicious acts of the insured.”

Washington courts look to the common law definition of “accident”, and the common law defines accident as something that happens without intent. The court employs an objective perspective to determine whether a reasonable person would conclude that “injurious consequences” are reasonably foreseeable from a given act.

Here, the complaint alleges El-Moslimany engaged in a campaign against Sindi, which would be deliberate and intentional conduct (i.e., inconsistent with being an “accident”). Defendants argued that the claim of defamation brings some of the allegations into the definition of “occurrence” since defamation could be based on negligence or recklessness. The court responds that the allegations clearly point to intentional conduct, so just because defamation could be unintentional, this does not trigger the policy’s definition of occurrence. Defendants also pointed to a relatively recent (2006) Washington Supreme Court case that looked to whether the insured intended all of the consequences from the acts, and not just whether the acts themselves were intentional. But the court says this case is not on point because in the previous case the policy language was materially different and, unlike the policy in this case, looked to the perspective of the insured to determine whether or not something was an accident.

The court also notes that the definition of occurrence is tied to “bodily injury” or “property damage”. While El-Moslimany’s acts allegedly caused emotional distress that had physical manifestations, the policy only covers emotional distress damages to the extent they are caused by physical injury. Here, there is no allegation that El-Moslimany caused physical injury to Sindi. So even if the allegations somehow constitute an occurrence, the alleged harm is outside the policy’s coverage of physical injury or property damage.

Finally, the court also rejects defendants’ argument that they will be prejudiced by State Farm ceasing to provide costs of defense in the underlying case (which is set for trial in May 2016). To be sure, the court says the timing is “unfortunate,” but the insurance company has not done anything wrong in trying to get out of coverage (after initially agreeing to defend).

This is an interesting ruling and relevant to the blogging community.

This is a case where the speaker was not alleged to have a business motive, but that could be one basis for the insurer to dispute coverage. (See this 2005 post from Professor Volokh that talks about the “business pursuits” exception in the context of blogging.) Another basis, which the insurer invoked here, is the exception for intentional or willful conduct. It’s unclear whether a garden-variety defamation claim would be covered by the insurance policy. Finally, the insurer also had the winning argument that there was no “bodily injury” or property damage. Note: coverage is 100% dependent on the policy language, so if you’re ever in a situation where coverage is a possibility–as painful as it is–read the policy language. Carefully.

In addition to “read the policy language carefully” another takeaway from this case is that while the duty to defend obligation is determined with reference to the allegations of the complaint (which can be unfortunate for insureds, as plaintiffs tend to pile on allegations that paint them in the worst possible light), this does not mean there is no room to persuade the insurance company that these allegations are not necessarily true. The court says that the allegations of the complaint do not control the duty to defend analysis if they conflict with facts known or readily ascertainable by the insurance company. Thus, if you are seeking to persuade the insurance company to defend, you may have some room to advocate on the facts. Don’t give up just because the complaint alleges something that falls within an exclusion.

Eric’s Comments: This case is indeed interesting, but I wonder how often we’ll see similar situations. It’s material to the ruling that Sindi alleged an intentional cyberharassment campaign. Had the dispute been a more typical back-and-forth online tiff with lots of hyperbolic or inconsequential yammering, the facts might not have supported the “intent” allegation as clearly. Similarly, the intent factor might have been less obvious if the lawsuit was over a single incident of defamation. So, like Venkat, I don’t see this case as too disconcerting for bloggers who might hope to avail themselves of their homeowner’s insurance policies.

Still, if Sindi loses the underlying case, arguably El-Moslimany will have gotten screwed by not getting insurance defense for what ultimately may be a covered incident. But if the court rules that El-Moslimany did, in fact, engage in a concerted cyberharassment campaign, we should be happy that the homeowner’s insurance policy won’t apply.