Photo credit: “An eraser from a pencil is starting to erase the word data” // ShutterStock

I previously blogged about this matter (see also Venkat’s update). A Massachusetts attorney, Goren, was unhappy about a user review of his law firm posted to Ripoff Report, which is well-known for not removing user posts. The plaintiffs sued the user for defamation in state court; the user no-showed. The plaintiffs got a default judgment and convinced the judge to assign the author’s copyright as part of the relief. The plaintiffs then turned around and sued Ripoff Report for copyright infringement for continuing to publish the review. Although this particular method of getting a review’s copyright via a default judgment was novel, copyright-based workarounds to Section 230 are well-known and usually problematic. This week, the court rejected the lawsuit.

Ripoff Report’s user agreement says that users grant it an exclusive license to publish the review (the exact language: “an irrevocable, perpetual, fully-paid, worldwide exclusive license to use, copy, perform, display and distribute such information and content”). However, the plaintiffs challenged the contract formation, saying the user hadn’t agreed to the user agreement.

Rather than asking what this individual author did and see, the court treats the formation question as a hypothetical. Thus, the court turned to the bogus “clickwrap”/”browsewrap” distinction, citing Nguyen. The court explains why the user agreement wasn’t a clickthrough agreement:

This sounds like bad news, yet the court concludes this is “an enforceable browsewrap agreement” (shoot me now). The court looks at whether “a reasonably prudent user would have had inquiry notice of the conveyance of an exclusive license to Xcentric.” The court explains:

The screen where users submitted their reports prominently featured a portion of the terms in the center of the screen, above the “continue” button that the users clicked to conclude the posting process. That screen, along with at least two of the other screens used in the posting process, also contained blue links to the terms of service at the bottom of the page which were conspicuously visible without scrolling beyond the “continue” button used to progress to the subsequent screen. The conspicuousness of the terms is supported by the contrasting color of the link to them coupled with the placement of the terms themselves on the final screen prior to submission….

Unlike in Nguyen, in this case, Xcentric provided further notice to users beyond the links at the bottom of the pages of the ROR. The beginning of the list of terms was visible above the “continue” button on the final submission screen. A review of those terms, by means of the scroll bar, would have revealed the term requiring users to transfer an exclusive license to Xcentric.

The court didn’t provide a screenshot, and its description leaves much to our imagination. However, I think an exhibit from Ripoff Report’s COO depicts the screen at issue, and the problem is obvious: 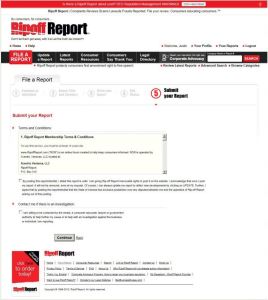 As you can see, the page has a can’t-miss scrollbox displaying the user agreement, but the agreement isn’t referenced in the checkbox below that scrollbox. In my opinion, Ripoff Report made a pretty significant gaffe not linking the checkbox to the scrollbox terms. The scrollbox text doesn’t even contain standard language like “by using the service, you agree to these terms” that would signal to users that they are agreeing to terms. No doubt that it would be trivially easy to fix this page to create an airtight clickthough agreement. Still, the court’s decision to enforce a contract is supportable. The scrollbox is so large and obvious that it’s hard to ignore; and I’m confident that a super-majority of users understood that they were agreeing to the terms when they saw that scrollbox and proceeded to post.

the ROR user was also required to check a box below the terms and conditions affirming that he granted an irrevocable right to Xcentric to post his report on the website….with the further explanation that his post “will not be removed, even at my request.”

So although Ripoff Report botched the formation of its user agreement, it had belt-and-suspenders bonus legal language that was properly formed in a clickthrough manner. Personally, I wish the court had focused on that language only and skipped the whole browsewrap digression. However, this bonus language didn’t mention exclusivity, so the court says that this checkbox gave Ripoff Report only a non-exclusive license to the review.

Goren also tried the Blockbuster/Zappos argument that Ripoff Report’s terms failed because it contained a unilateral amendment clause. We’ve seen an increasing judicial tolerance of such clauses in the past few months, and the court brushes the argument aside for the odd reason that Ripoff Report never invoked it:

The Plaintiffs make a cursory argument that the any contract between DuPont and Xcentric was illusory because Xcentric reserved the right to change the terms and conditions. They do not allege, however, that Xcentric did change terms and conditions in any way during the relevant time period. Without a change to the terms that affected that Plaintiffs’ rights or remedies, the Court is not persuaded that the contract was illusory.

Even if the TOS was infected by the unilateral clause, the separate checkbox language shouldn’t have been affected. So even if Goren had bypassed the user agreement, the separate non-exclusive license should have survived.

While Ripoff Report overcame this challenge, courts remain baffled by the distinction between “clickwrap” and “browsewrap” in troubling ways. I now recommend that every contract formation page contain a mandatory checkbox saying “I agree to the terms” which are available via a link or presented in a scrollbox. Read as a whole, the caselaw is clear that the checkbox isn’t needed; but seeing how the courts are choking on “browsewraps,” a mandatory checkbox should speed up judicial determinations and save a lot of unnecessary litigation angst.

Because the court upholds the author’s exclusive license to Ripoff Report, there were no relevant copyright rights remaining for the state court to transfer in the default judgment. Even if that weren’t true, the state court’s assignment in the default judgment violated 17 USC 201(e), which invalidates any government involuntary transfers of copyright. Why did it take so long for the court to realize that? The 201(e) problem was obvious from day 1.

The plaintiffs also alleged that Ripoff Report’s Corporate Advocacy Program violated Massachusetts consumer protection law. Ripoff Report defended on Section 230 grounds. The court says the plaintiffs’ claim is based on “Xcentric’s own solicitations and advertisements,” so Section 230 doesn’t apply to it. Nevertheless, the claim still fails. The plaintiffs needed to show they lost money or property from the representations. However, the Corporate Advocacy Program didn’t cause any reputational injuries–if any were suffered, they were due to the underlying review, and the court already held Section 230 protects Ripoff Report for the review.

It’s nice to see this lawsuit shut down, but the copyright workaround to Section 230 remains a plaintiff favorite, so we can expect to see similar litigation in the future.

Venkat’s comments: Forcing users to check the box is viewed as a foolproof way to make sure an online contract is enforced, but this is the second case we’ve seen where a court says that the effect of a user checking the box can be ambiguous. Sgorous v. TransUnion, mentioned in our recent online contracting roundup, was another such case. Here, the checkbox—which the user had to click in order to post—appeared beneath the terms and broadly summarized the terms. It required the user to affirm that by posting a report he or she attested that it was valid, truthful, and granted a license to Ripoff Report. The court says even this is ambiguous:

In Sgorous, there were two separate (and arguably distinct) contractual terms the user could have been assenting to: a credit check authorization, and the payment terms. Here, Ripoff Report merely summarized the underlying terms in the checkbox, but the court still finds a way to say that assent may be ambiguous. Given this, Eric’s recommendation above makes the most sense. Simply link to the terms and require users to check the box saying they assent to the linked terms.

UPDATE: Ripoff Report sent around a press release about the case that included the following:

Ripoff Report stressed that it works hard to eliminate tactics that are perceived to be cyberharassment, cyberstalking, cyberbullying or what is generally considered to be a “revenge post”. Postings of this nature are rejected and/or redacted if found on the website. Ripoff Report’s Terms of Services forbid postings of predominantly personal attacks or criminal allegations against another person without any proof being offered with it. Due to the Ripoff Report’s popularity and based on law enforcement requests, Ripoff Report has instigated a new Law Enforcement Investigation Policy to improve coordination with law enforcement investigations and judicial findings. The new policy states that the Ripoff Report will redact a report to remove the name of a reported business and associated owners when the following three conditions are met: 1) A criminal court issues a specific findings that the author of a report is not the customer of the reported business AND 2) the report is entirely false AND 3) the author had an evil or fraudulent motive for posting the false report. The findings of the court must be supported by clear and convincing evidence from a law enforcement investigation proving the findings.

It’s clear that they continue to walk back from their absolutist “never remove posts” position.