The Third Circuit has held that a banana costume qualified for copyright protection (the blog reference to the district court opinion). The plaintiff’s design is on the left. The defendants’ designs are in the middle and on the right. The defendant conceded that its designs were substantially similar. Due to this ruling on copyrightability, the plaintiff satisfied the prima facie elements for infringement, and the case will go back to the lower court for consideration of defenses. 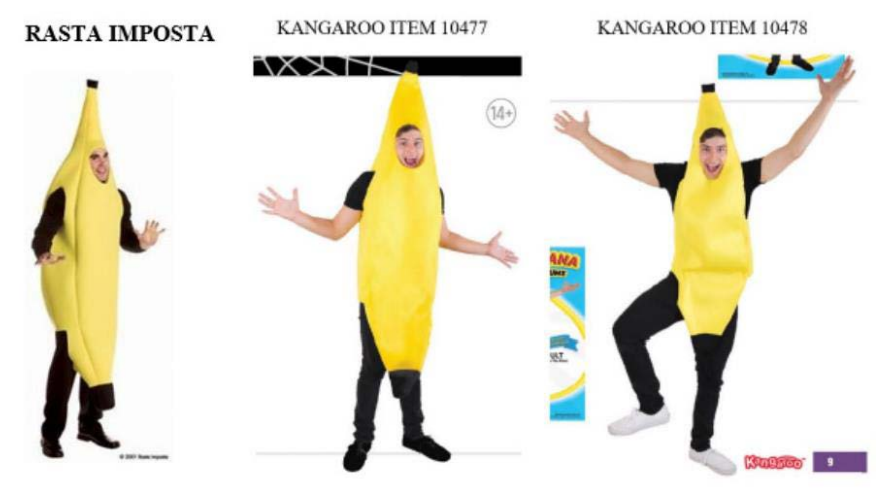 The court correctly characterizes the banana costume as a “useful article.” (Just how useful a banana costume is to society is a philosophical question I’ll let you contemplate on your own). The sculptural elements are “the banana’s combination of colors, lines, shape, and length,” but not anything related to the cutout holes, which are utilitarian elements. The court declares:

[The opinion is relatively light on banana puns, but I assume the “split” reference was one.]

The court rejects a dissection approach of looking at each element independently (what the court calls “divide-and-conquer”). It doesn’t matter that the plaintiff’s costume actually looks like a natural banana; what matters is “whether the depiction of the natural object has a minimal level of creativity. Rasta’s banana meets those requirements.”

copyrighting Rasta’s banana costume would not effectively monopolize the underlying idea because there are many other ways to make a costume resemble a banana. Indeed, Rasta provided over 20 non-infringing examples. As the District Court observed, one can easily distinguish those examples from Rasta’s costume based on the shape, curvature, tips, tips’ color, overall color, length, width, lining, texture, and material.

The scenes a faire doctrine also doesn’t help the defense. As with the merger doctrine, the court says it’s about stopping monopolization of an idea–another uncharitable characterization, and one that masks important doctrinal nuances. The court explains:

The court’s definition of the costume’s subject matter bypasses much of the problem. It’s true that bananas could be green or brown, but I doubt there’s much of a market for rotten or unripe banana costumes. Instead, everyone associates edible bananas with a bright yellow–about the same shade of yellow as the plaintiff’s design. And black tips are naturally occurring on bananas. If the appropriate baseline for comparison were “ripe bananas,” rather than just “bananas,” I don’t see how the plaintiff’s costume reflects many design choices that aren’t “standard, stock, or common.” In other words, there aren’t many other ways to depict a costume of a naturally-occurring ripe banana other than the way the plaintiff did it. So why and how did the court choose the baseline of “banana” rather than “ripe banana”? The court doesn’t explain this choice, but I believe there is some relevant academic literature, and maybe it needs additional academic consideration.

Even if Star Athletica effectively ensured this result, the consequences are going to be unfortunate. Instead of new market entrants designing run-of-the-mill banana costumes, they will have to artificially add enough minor unique details to show that the new designs aren’t substantially similar to any other precedent banana costume. These immaterial differences won’t benefit consumers (not even by expanding their choiceset–I doubt most retailers stock multiple rival versions of banana costumes), but they will increase production/market entry costs.

I’ve raised a similar argument about how emoji designs contain immaterial design differences to create a defensible gap against a substantial similarity accusation–differences that undermine our ability to effectively communicate across technology platforms. Ironically, the defendant in this case (Kangaroo) is suing Amazon and others for selling emoji-designed beach balls that Kangaroo believes are too similar to its copyrighted emoji designs. So Kangaroo is on both sides of this legal question. Hmm.

I’ll close by noting that this is the *second* time this decade that I’ve blogged about IP disputes over banana costumes. You may recall the legal battles of the Banana Lady from 5 years ago. I shudder to think that this ruling could reinvigorate her litigation frenzy.