The parties compete for the provision of health services related to traveling, like immunizations. The defendant Avance bought keyword ads triggered on the plaintiff’s trademark “Passport Health.” In 2013, the trademark owner complained, and Avance apparently dropped the Google ad buy. However, apparently everyone forget about Bing. In 2017, the trademark owner reemerged, complaining about the Bing ad buys. This lawsuit ensued.

It doesn’t go well for the trademark owner. You kind of get the sense where the judge is going from this introductory summary: “During the three-year period leading up to this lawsuit, Avance’s Bing Passport Health AdWord resulted in forty-one clicks, seven of which occurred in the month this suit was filed. It is undisputed that there is no evidence that a consumer was actually confused by the Avance’s Bing advertisement.” How in the world did this case reach summary judgment rather than settling early? Worse, three Biglaw firms (Womble, Michael Best, and Troutman Sanders), including 6 lawyers in 5 different offices, were involved in this litigation. What an expensive waste.

This screenshot shows Avance’s ad buy. See the first ad on the right. As you can see, the trademark “Passport Health” is in the first line. 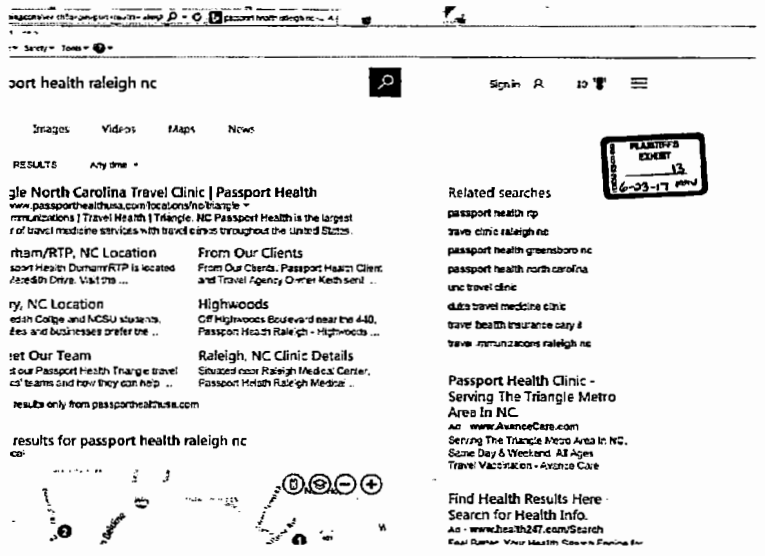 The court says competitive keyword advertising is not per se infringing. Consistent with the uncited FTC v. 1-800 Contacts ruling, the court says “Passport has failed to identify any decision which has held that the mere purchase of an AdWord from a search engine constitutes trademark infringement.” (Cites to the 2007 JG Wentworth and 2004 Geico rulings). This case doesn’t disturb that uniform and unbroken line of jurisprudence.

The court then considered Avance’s inclusion of the trademark “Passport Health” in the ad copy. The trademark owner made the mockable argument “that it is entitled to judgment as a matter of law because Avance used its identical mark in the Bing advertisement, and therefore there is a presumption of a likelihood of confusion.” Wow, that’s pretty hostile to the venerable and universally accepted multi-factor test for likelihood of consumer confusion. The trademark owner also made the mockable argument that “because the phrase ‘passport health’ appears in Avance’s Bing advertisement, trademark infringement has been conclusively established.”

Despite the trademark owner’s optimism, the court easily concluded there’s no likelihood of consumer confusion. Citing the Network Automation ruling, the court says “A search engine’s segregation of the search results on the page so that advertisements appear in separately labeled sections, in smaller or different font, or with shading lessens the likelihood that consumers will be confused.” I guess Bing’s implementation passed muster, even though the screenshot above shows no shading or lines to demarcate the ads. The court concludes:

Avance has proffered evidence that the Bing advertisement was clicked 1.4 times per month for the three years which preceded this case, and that only .012% of visits to Avance Care’s website during a twenty-six month period came from the Bing advertisement. See George & Co., 575 F.3d at 398 (4th Cir. 2009) (“[e]vidence of only a small number of instances of actual confusion may be dismissed as de minimis.”). It is undisputed that Bing’s share of the search engine market is minimal as compared to Google’s, and there is simply no evidence that any consumers clicked on the Avance Care ad and were confused.

If a competitive keyword ad falls in Bing’s forest and no one is around to hear it, is it trademark infringement?

As a bonus insult, the court denigrates the strength of the “Passport Health” trademark, saying it’s a “conceptually weak” mark. Yes, the trademark owner paid substantial money fighting 41 clicks, only to walk out of court with its key trademark asset besmirched.

You already knew this, but let me remind you: if you’re suing over competitive keyword ads….