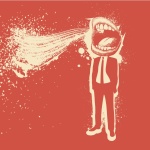 This case involves message board posts by a community that criticized Ellis’s copyright enforcement efforts. Ellis sought and obtained a protection order against Chan, the operator of the message board, on the legal grounds that the users’ posts constituted “stalking”.

The Georgia Supreme Court reverses the order. Chan made First Amendment and Section 230 arguments, as well as arguments based on the text of the statute. The court focuses on the latter:

That a communication is about a particular person does not mean necessarily that it is directed to that person….The limited evidence in the record shows that Chan and others posted a lot of commentary to his website about Ellis, but it fails for the most part to show that the commentary was directed specifically to Ellis as opposed to the public. As written, most of the posts appear to speak to the public, not to Ellis in particular, even if they are about Ellis. And there is no evidence that Chan did anything to cause these posts to be delivered to Ellis or otherwise brought to her attention, notwithstanding that he may have reasonably anticipated that Ellis might come across the posts, just as any member of the Internet-using public might. The publication of commentary directed only to the public generally does not amount to “contact,” as that term is used in OCGA § 16-5-90 (a) (1), and most of the posts about Ellis quite clearly cannot form the basis for a finding that Chan contacted Ellis.

Most of the statements could not be construed as “communications” to Ellis, but even to those that could, the court said that they don’t fit within the statute because they are not “unwilling communications”:

To the contrary, the commentary about which Ellis complains was posted on Chan’s website, and Ellis learned of that commentary — that is, it arguably was communicated to her — only as a result of her choice to discover the content of the website. The evidence shows that Ellis visited the website herself — it appears, in fact, that she registered herself as an authorized commentator on the website — and that she had others visit the website and report back to her about the commentary published there. Generally speaking, our stalking law forbids speech only to the extent that it is directed to an unwilling listener ..

Both are important points. In particular, people making a stalking argument based on speech often attempt to equate speech about a person with speech directed to a person. The court says the two are different. The court’s discussion of whether the speech was thrust on Ellis or sought out by her was equally interesting, and comes up often in social media threat cases.

It’s unfortunate the Chan was dragged into this and was forced to spend resources fighting what was a blatant attempt to squelch unflattering commentary. In this respect, both Section 230 and anti-SLAPP statutes perform valuable functions in screening out non-meritorious claims and deterring people who bring them. (As Eric has blogged repeatedly, a federal anti-SLAPP law would quite usefully avoid state-by-state variations and implement a uniform standard.)

The court system ultimately got it right, but one wonders how many similar cases fall through the cracks, either due to lack of resources or counsel.

h/t Aaron Caplan (who writes about overbroad protection orders and was amicus, represented by EFF and Volokh)