This is an online harassment dispute. Ellis, the plaintiff/petitioner, is the author of a poem called “The Dash”. She has achieved some degree of public figure status through the poem’s notoriety. The poem is about a person who speaks at a funeral, and Ellis encourages people to recite (but not publish) the poem. According to Chan, the defendant/respondent, Ellis also engages in scorched-earth copyright enforcement tactics, sending threat letters and extracting settlements from a wide-ranging group of people or entities who post or publish her poem without permission. In other words, she is alleged to be a copyright troll.

Chan runs the “Extortion Letter Info” website. He’s a Georgia businessman involved in a range of ventures. Receipt of a demand letter from Getty prompted him to start the ELI site, which has become a clearinghouse of sorts where people discuss, strategize, and vent about copyright enforcement campaigns. In 2012, after receiving information from a Seattle businesswoman about Ellis’ collection efforts, Chan added a forum to ELI titled “Linda Ellis/Linda’s Lyrics/Dash Poem Forum”.

According to Chan’s brief, one of Ellis’ employees sent a DMCA notice targeted at a document that Chan posted to Scribd. Ellis then sent an “abuse notice” to ELI’s web host, saying that ELI had posted harmful content about (or directed to) her. 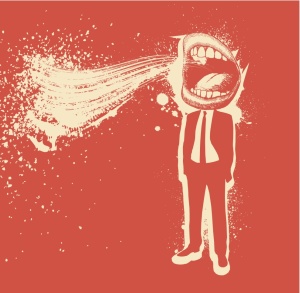 This resulted in Chan having to change hosts, and Ellis sent an additional message flagging supposedly abusive content posted to ELI. This abuse notification was not as effective as the earlier one, because the new web host stood firm. Ultimately, Ellis sought a protection order under Georgia’s anti-stalking statute based on several different posts to ELI. She obtained an initial order ex parte, and after giving an opportunity for Chan to weigh in and conducting a (what one party described as a somewhat harried) hearing, the court made the order permanent.

The totality of the evidence in support of Ellis’s request for the protective order consisted of posts to ELI. Some of the posts were by Chan and others were from third parties. The court also considered the affidavit of a Seattle-based lawyer, who strangely weighed in on Chan’s supposed dangerousness, but then went on to author an amicus brief in support of Ellis. (I wasn’t really sure what the deal was here, although my uninformed guess is that the lawyer and Chan had tangled in the past, in correspondence or via email.)

Chan was admittedly antagonistic towards Ellis. He obviously disagreed with her tactics and had also apparently been paid, by one (or more) of the recipients of Ellis’ letters, to engage in a PR campaign to force Ellis to back down. Chan pushed some buttons. His posts did state a vague intent to engage with Ellis offline, but it’s tough to characterize any of them as truly threatening, or even intending to invade Ellis’s personal space:

One goal for my writing this piece is to let the world-at-large that ELI is now for hire to hit back and help get revenge against those that legally threaten them. Another goal is to remind Team Linda know, they have a lot of people who don’t like them watching and monitoring them. They constantly feed April Brown and ELI. We talk and share information. Another goal is to further educate people that many problems can be “resolved” without expensive attorneys and going down a road that favors their better-financed opponents. Extorting someone for $100K is a huge game-changer that has compelled my client to stand up and do something radically different and not play defense anymore. It is now time to hit back and hit back very hard where it hurts. [emphasis added]

A couple of posts from Chan did intimate that he had information about Ellis, including potentially unflattering information:

Chan mentions Ellis’s mailing address, but only in the context of wondering whether her letter-writing campaign is funding her mortgage payments on her house (with a commenter speculating about why her home shares an address with a day care center). The general tenor of his posts is that he has the ability to uncover information about Ellis from various sources, and he encourages others to do the same. None of the discussion is unrelated to her tactics or overall campaign–it may be personal, but it’s only personal because Chan doesn’t like Ellis’s style of copyright enforcement. There’s no dispute that Chan never met Ellis in real-space, followed her in real-space, or called her. (There is one post where Chan alludes to being in the same part of town as Ellis, but the two never crossed paths.) Nor is their any dispute that any of the ELI commenters engaged in these acts.

The court issues a permanent order against Chan, in part based on Chan’s supposed violations of the (ex parte) temporary order. Chan appealed. By request of his counsel, the appeal was transferred from the Georgia court of appeals to its supreme court. (Prof. Volokh participated as amicus on behalf of the EFF and Aaron Caplan, a law prof at Loyola who has written a bunch on how these types of ex parte no-contact orders can raise First Amendment issues.) The trial court’s order is striking in its breadth: 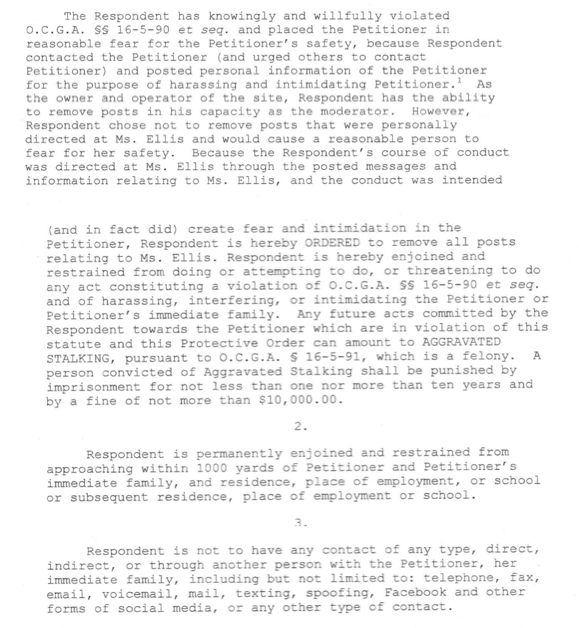 It’s fairly obvious that this order has little chance of surviving unscathed. Three of the most glaring problems are: (1) even assuming some posts by Chan did make Ellis reasonably fearful for her safety, there is no basis to remove the other posts; (2) banning Chan from talking about Ellis in the future is a prior restraint; and (3) Chan is not responsible for the comments posted by others and neither the content of these posts nor his failure to remove them should form the basis of liability to Chan (nor should he be required to remove their posts).

More broadly, the order raises a question about what is enough to constitute a threat under the Georgia statute. Is a threat to cause her non-physical harm sufficient? Given that it is a stalking statute and references “safety,” one would think the answer would be no. Perhaps someone who engages in repeated one-to-one contacts or physical conduct can run afoul of the statute by communicating statements that are ambiguous threats, but there wasn’t any course of conduct or repeated contact here. Threatening to harm her business interests or her reputation should not suffice. Does disclosing Ellis’s personal information change the analysis? Given that her information is publicly available, the answer here should be no as well. (As a sidenote, the cases would give Chan and ELI wide berth from a defamation standpoint to characterize Ellis’s tactics as trolling or extortionate.)

The oral arguments of both sides really highlight their different conceptions of what it takes for online speech to be considered threatening. Ellis’s argument also implicitly raised the question of whether her gender should factor into the question of whether the speech is considered threatening. (This has come up a lot recently in discussions about the types of online harassment women face.) Without mentioning it specifically, Ellis’s lawyer took the tone that “taken in context, of course these are threatening.” The court brought up US v. Elonis, a case that is pending in front of the Supreme Court which will address whether the federal threat statute requires a subjective intent to threaten in addition to having been objectively perceived as a threat. Elonis looks at the standard under the federal statute, which may be different from the standard for the Georgia statute (which may still be different from what the First Amendment requires). For this reason I don’t think it’s particularly determinative of the outcome here. The case also brought to mind US v. Cassidy, where a judge said that a federal stalking indictment based on online commentary could not withstand First Amendment scrutiny. As in Cassidy, Ellis is somewhat of a public figure and the posts are clearly spurred by Chan’s disagreement with Ellis’s tactics. There’s also no personal relationship between the parties.

It’s also interesting whether someone who operates a website (such as Chan) should be held responsible for the actions of his commenters that he allegedly encouraged. In other words, can Chan somehow be held liable for encouraging others to harass and stalk Ellis? Is he guilty of stirring up a so-called digital lynch mob? I’m not exactly sure how someone would tee up this type of a claim, but Chan was careful about what he encouraged others to do and it seemed clear his speech did not cross the line into illegal advocacy. The factual basis for such a claim was slim, or non-existent. Not to mention that First Amendment concerns counsel a close look at the factual underpinning of any liability in this scenario.

I’ve mentioned in passing that anti-stalking laws are often used to squelch criticism, and this is a good example. Ellis’s complaint is that Chan (and his commenters) are talking about her in ways they should not be. In fact, one of Ellis’s qualms seemed to be that Chan’s site ranked highly in search results, and as a result, people searching for Ellis online would be more likely to see the critical statements about her on Chan’s site. Ellis’s lawyer (or perhaps amicus who argued supporting Ellis) likened Chan’s actions to spray painting an epithet on a high school kid’s locker, or to a “virtual cross burning” [yikes .. strained analogy alert!]. Ellis’s lawyer seemed oblivious to the First Amendment interests at play, trying to cast Chan as some sort of ringmaster, directing a circus of harassment towards Ellis. Although it’s always tough to judge from oral argument, it seemed like the justices picked up on the First Amendment issues at stake, and on the many problems with the trial court’s order. They had some tough questions for Ellis’s lawyers.

The oral argument video is here. It’s worth watching.