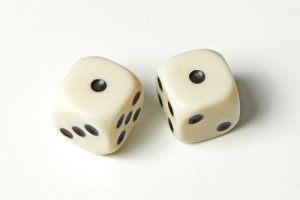 The eyes of the lawyers? Photo credit: Pair of thrown dices showing two ones // ShutterStock

This case involves the now defunct website www.oceans11.info. There’s one archival version in Archive.org from 2012, though I found it confusing. The website was a gripe site created by Tim Anders (a/k/a “Dr. Hope“), a professional poker player. Anders protested online after he was banned from the Ocean’s Eleven casino in Oceanside. The gripe site had a user messaging area, and it generated over 100 anonymous comments, many critical of the casino. Anders also posted criticisms to his personal Facebook page and allegedly sent “agents” to the casino to distribute hard copy flyers promoting the gripe site.

The court says Anders met the initial threshold to qualify for anti-SLAPP protection. Although the casino tried to style its lawsuit against him as an intellectual property enforcement action, the court says the lawsuit is really about squelching the speech of Anders and his commenters. The court says that Anders’ website qualifies as a public forum, and “consumer information posted on a website concerns an issue of public interest” (citing, among others, Chaker and Wong). The court says:

Because Anders met the initial qualification for anti-SLAPP protection, the burden shifted to the casino to show a probability of success on the defamation merits. The defamation claim related to three statements:

[1] “If poker dealers talk about how they feel to a customer, [Kelegian] has said they will be fired.

[2] “A short time after [Kelegian] saw a copy of that letter [to Lack], [Kelegian] had [Anders] banned from Ocean’s Eleven.

[3] “As you know [Kelegian] had me banned from Ocean’s Eleven, my crime? Being concerned about the treatment of employees.”

This is a strong defense-favorable result that normally I would support, but even I wonder if the court went too far. For example, the first statement at issue put words in Kelegian’s mouth. Even if I’d question whether those words were actually defamatory, I don’t see how to characterize that as a statement of opinion (compare Eugene Volokh’s recent discussion about the opinion/fact line in defamation); nor is it so clearly hyperbolic based on its intrinsic characteristics. The only explanation for the court’s result is that we almost never can take any gripe site content seriously. There is an implicit tension between that conclusion and the conclusion that the gripe site is a public forum on a matter of public interest. The court seems to be saying that the site is simultaneously socially important enough to be protected but not socially important enough that anyone would believe it.

The court, perhaps recognizing the shakiness of its conclusion, independently justifies the anti-SLAPP motion because the casino can’t show any pecuniary loss from Anders’ statements.

Whether or not the court applied the law correctly in this case, it’s clear that it keeps getting harder to win online defamation cases–especially when there’s a robust anti-SLAPP law in place, which puts an increasing burden on plaintiffs to prove their case before filing their complaints.

With respect to the domain name, the court cites the classic griper site case Bosley Medical:

Anders’s use of the www.oceans11.info domain name for his website is the same as the defendant’s use of www.BosleyMedical.com in Bosley, supra, 403 F.3d 672. Both use the respective websites to criticize a company of which they take issue with its product or service. Anders is not capitalizing on the good will Ocean’s Eleven has created in its mark. He is not using the mark to sell a competing product. Any harm that Ocean’s Eleven may have experienced arises not from a competitor’s sale of a similar product under Ocean’s Eleven’s mark, but from Anders’s criticism of Ocean’s Eleven….

We agree with the Ninth Circuit in Bosley and its reasoning and apply it to Ocean’s Eleven’s argument regarding any potential links on Anders’s www.oceans11.info website to other websites where his books could be purchased or people could donate to Anders’s litigation fund. Anders is not employing his website www.oceans11.info to offer competing products using Ocean’s Eleven’s mark. The links to the other websites where Anders is selling his books or his request for contributions to his litigation fund is too tenuously related to the allegedly infringing domain name and the services and/or products Ocean’s Eleven offers its customers.

(For more on the silliness of link counting in domain name cases, see my Online Word of Mouth article).

The ACPA claim fails for lack of a bad faith intent to profit.

Overall, this case reminded me of the kind of gripe site litigation that used to be fairly common a decade ago but that we rarely see today. After more than a decade of gripe site lawsuits, we now know those lawsuits usually don’t work in court and are even less likely to be a profitable business decision. Strong anti-SLAPP laws further degrade the plaintiff’s economic calculus. The appellate court made it clear that the casino will have to pay Anders’ attorneys’ fees for this failed effort to shut down a gripe site.