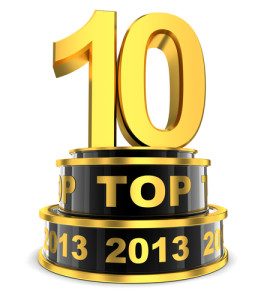 A look back at the Internet law highlights of 2013:

#9: Gmail ECPA Decision. In September, Judge Lucy Koh ruled that Google’s method of triggering ads in Gmail may violate an antiquated privacy law, the Electronic Communications Privacy Act (ECPA). For heavy Gmail users like me (I use Gmail many times every hour), a legal ruling that might prompt Google to scale back Gmail is petrifying. We’ll find out more about Gmail’s legality when the Ninth Circuit rules on the matter.

#8: Federal Trade Commission’s Internet Crackdowns. We already knew that the Federal Trade Commission (FTC) is paying close attention to the Internet. One by one, they have been locking up the major Internet players (including Google, Facebook and Twitter) to 20 year consent agreements. In 2013, the FTC’s Internet obsession became clearer. Among the FTC’s portfolio of interests this year was “native ads” (online ads that look like editorial content) and other online content they fear is inauthentic (such as blog posts and tweets in response to freebies); online ads to kids/COPPA; online disclosures (“Dot Com Disclosures“); the “Internet of Things;” and data security, including a closely watched case, FTC v. Wyndham Hotels, where a court finally may opine on the FTC’s self-proclaimed authority to punish hacking victims. Putting these disparate activities together, if there’s an actual or perceived power vacuum for regulating new Internet technologies and business practices, the FTC seems determined to fill it.

#6: The Copyright Safe Harbor Is Failing. One of the foundational Internet laws is 17 USC 512, the law that says websites aren’t automatically liable for user-caused copyright infringement. Section 512(c) says that websites should be liable for user-caused copyright infringement only if copyright owners send them takedown notices and the websites don’t expeditiously respond. Section 512(c) has contributed to the flourishing user-generated content ecosystem, but 2013 was not a good year for the safe harbor. In a future post, I’ll explain more how the rulings of 2013 put the safe harbor on the endangered species list.

For now, let me highlight three problematic Section 512 developments this year. First, the GrooveShark case indicated that pre-1972 sound recordings aren’t covered by Section 512. As a result, websites may not be able to wait for takedown notices for pre-1972 sound recordings, nor can websites easily tell if a sound recording is pre- or post-1972. Second, courts have progressively expanded the ways that a website might be charged with knowing that users were infringing copyrights even thought the copyright owner didn’t send takedown notices. Even if the website can successfully defend that accusation, it can cost tens of millions of dollars to establish its innocence. Third, courts have not rejected the possibility that investors in user-generated content websites may be liable for users’ infringements, even if Section 512 protects the website itself. Nothing chills an investment climate faster than potential investor liability for their portfolio company’s activities.

As I’ve explained before, Section 512 is a miscalibrated safe harbor, and its deficiencies are growing more pronounced every year.

#5: Government Employees and Social Media Mishaps. The stereotype is that teens and college students routinely commit social media faux pas, and we definitely saw some legal overreactions this year (such as cases finding students guilty of criminal harassment, criminal computer misuse and criminal “menacing“). But what stood out to me this year is how many government employees got into trouble with social media.

Like students, government employees may make thoughtless decisions to share content (1, 2, 3). More problematically, social media posts can reveal how government employees exercise their professional discretion, and it’s not always pretty. For example, a social worker said she applied “imaginary rules” to decide if parents could keep their kids, and a hearing officer implied that he ruled more harshly against people who submitted briefs in the Arial font. In both cases, the government employees were just blowing off steam online. Still, it’s intolerable to think that our civil servants are not following the law, and so their posts have significant social and professional consequences.

In 2013, we also saw courts struggle with the legitimacy of government employees being fired for speaking out in social media against their bosses. Compare Bland v. Roberts with Graziosi v. Greenville and Gresham v. Atlanta.

#4: Patent Reform. In 2011, Congress enacted the America Invents Act (AIA), the biggest change to patent law in a half-century. While the AIA was intended to curb abusive patent enforcement, some of its most significant reforms were left on the cutting-room floor. Following the AIA’s enactment, most observers expected Congress to ignore patent law for some time. Yet, just two years after the AIA’s enactment, Congress is revisiting patent reform with the aim of doing a better job of shutting down abusive patent enforcements–basically, fixing the AIA’s holes. The House passed a patent reform bill, and it’s likely some version will pass the Senate as well.

Efforts to curb abusive patent enforcements are brewing outside of Congress too. Vermont enacted a law designed to curb patent trolling, and some state attorneys general have brought enforcement actions against senders of patent enforcement letters. Meanwhile, in the courts, the Supreme Court has taken yet another case about patentable subject matter, this time squarely implicating the patentability of software (Alice v. CLS). Collectively, 2013 represented a watershed year in the pushback against overreaching patent enforcements.

#3: 47 USC 230 Under Fire. In 1996, Congress passed 47 USC 230, perhaps the most important Internet law ever. Section 230 says that websites aren’t liable for third party content. Like every law, it creates winners and losers. The winners include Web 2.0 services that rely on user-generated content–basically, most of the top websites that we use every day. The losers includes a variety of plaintiffs whose cases against those service providers are stifled.

#2: State Legislatures as Privacy Regulators. Privacy regulation is a hot topic, especially in state legislatures. We’re seeing a tsunami of new state laws regulating a full range of privacy-related concerns, from revenge porn to data breach notifications to restrictions on asking for employees’ social media passwords. The California legislature has, as usual, embraced the privacy regulation mania with unmatched zeal. Priding itself on the “California Effect” that California’s solutions provide templates for regulation across the world, California harvested a banner crop of new privacy regulations in 2013, including providing an “online eraser” to kids, restricting kids from getting certain types of online ads and requiring websites to disclose if they are honoring the “do-not-track” signals sent by browsers. In a future post, I hope to explain the systemic defects with state efforts to regulate Internet privacy.

#1: NSA Scandals. Let’s see, why did this rank #1 on my list? Well, combined with the failure of Healthcare.gov, the NSA scandals spelled the end of Obama’s effectiveness as president. He lost a lot of allies, both domestically and internationally, and he’ll be playing defense for the remainder of his term. The scandal sparked an international trade war that will prompt the imposition of trade barriers related to privacy. This, in turn, will reduce the market opportunities for Silicon Valley technology companies, who have been a key engine powering the American economy. The NSA programs apparently produced zero measurable benefit in keeping Americans safe from terrorism. And finally, the scandal reminded us that the Internet is a giant machine for spying, and governments can never be trusted in their rapacious, unquenchable desire to know more about the people they purportedly work for.
___

* The Increasing Importance of Statutory Publicity Rights. Statutory publicity rights can last virtually forever (100 years post-mortem in Indiana and Oklahoma), they can have statutory damages ($750 per violation in California), they survive Article III standing dismissal challenges, and as we saw from the EA Sports cases, they can be used to attack editorial content. Overall, a well-designed tool for litigation fiestas.

* Teens Chasing The Illusion of Privacy Control. Snapchat is one of the fastest-growing services, and its decision to turn down a reported $3B buyout offer has to be one of the year’s boldest decisions by a start-up. Snapchat’s growth is due primarily to its purported feature that users–primarily young adults–can share photos with friends and then automatically take the photos back. Because we know that digital data is impossible to eradicate, we know this functionality is illusory. Putting aside Snapchat’s lackadaisical response to a hack and other technical snafus, Snapchat suffers from an incurable Analog Hole, i.e., recipients can always take a photo of the photo. Similarly, Twitter is winning market share from Facebook because teens like its ability to create private accounts, even though messages posted to private accounts often don’t stay private (see, e.g., Moreno v. Hanford Sentinel, Finkel v. Dauber).

* Jargon-watch: some of the words that appeared in legal opinions this year include “DTF”, catfishing, twerking and photobombing.
___

Hidden Track #2: A few other oddities from the year:

← Nurse Properly Fired and Denied Unemployment Due to Facebook Rant
Federal Court in Virginia Court Says Domain Names Are Not Property, But Contractual Rights →
Subscribe to Blog via Email
Categories