Here are some things I hate:

* duplicitous litigants, such as plaintiffs who buy competitive keyword advertising yet sue competitors for doing the same thing

* economically irrational and socially wasteful litigation, such as plaintiffs who spend over a million dollars in legal fees on a problem that, at most, is worth tens of thousands of dollars

* pugnacious litigation over incredibly weak trademarks, like so-called trademarks that are simply 1-800 plus a generic noun

* trademark doctrines that have no rigorous definition or scientific support, like the initial interest confusion doctrine

* appellate courts that eviscerate a legal doctrine without expressly saying the doctrine is dead, leaving the legal doctrine as a zombie to plague the courts for many years

(Why yes, I did wake up on the wrong side of the bed this morning).

With this list in mind, you can see why I hate the 1-800 Contacts v. Lens.com lawsuit. 1-800 Contact has spent enormous amounts on legal fees—at least $650k as of 2010–pursuing Lens.com for competitive keyword ads that had generated $20 in profit for Lens.com (no, that’s not a typo) and, at maximum, a few tens of thousands of dollars in revenue for Lens.com affiliates. All of this litigation is predicated on the initial interest confusion doctrine, an overly amorphous doctrine that no one can define or find any scientific support for, and which has been has been a loser in court for many years. To top it off, 1-800 Contacts had hypocritically engaged in competitive keyword advertising itself. Glass house and stones, etc.

After 6 years in court, the case isn’t over yet. This week, the Tenth Circuit affirmed most of the district court’s opinion and emphatically rejected most of 1-800 Contacts’ lawsuit against Lens.com for the competitive keyword advertising it and its affiliates did. However, a small issue got remanded for a jury trial, so the parties will get the pleasure of wasting many tens of thousands of dollars more to conduct the jury trial unless they can finally find a way to settle. Hooray for litigation that create massive deadweight social losses!

1-800 Contacts sued Lens.com in 2007. In 2010, the district court destroyed 1-800 Contacts’ arguments, handing Lens.com a complete win. On appeal, the Tenth Circuit upholds most of the lower court’s ruling.

1-800 Contacts argued that Lens.com created initial interest confusion by buying 1-800 Contacts’ trademarks. The Tenth Circuit adopted one of the nation’s most favorable definitions of initial interest confusion in its horrible 2006 case Australian Gold v. Hatfield. That case said initial interest confusion “results when a consumer seeks a particular trademark holder’s product and instead is lured to the product of a competitor by the competitor’s use of the same or a similar mark.” If this is just a restatement of bait-and-switch law, fine, but it’s generally believed the Tenth Circuit standard covered more than bait-and-switch. Bait-and-switch requires an initial falsity to bait the hook but the 10th Circuit’s standard didn’t mention falsity, and there’s no intrinsic falsity in a typical competitive keyword ad buy where the competitor’s trademark is used to trigger ad copy.

Unfortunately, the Tenth Circuit doesn’t have the fortitude to knock out the doctrine entirely. Instead, it offers this broad legal interpretation:

initial-interest confusion would arise as follows: a consumer enters a query for “1-800 Contacts” on Google; sees a screen with an ad for Lens.com that is generated because of Lens.com’s purchase of one of the nine Challenged Keywords; becomes confused about whether Lens.com is the same source as, or is affiliated with, 1-800; and therefore clicks on the Lens.com ad to view the site. Lens.com has exploited its use of 1-800’s mark to lure the confused consumer to its website.

With respect to the ads without the 1-800 Contacts trademark in the ad copy, Lens.com got a 1.5% CTR and its affiliates got less than 1% CTR (0.6-0.7%). Because the CTR was dramatically below the 10% threshold that’s probative of a lack of consumer confusion, there was no actionable initial interest confusion either by Lens.com or its affiliates. 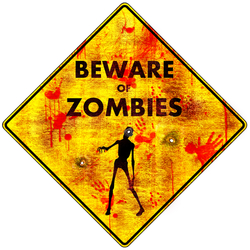 In addition to grousing about the zombie-fication of the initial interest confusion, I have to kvetch about this passage from the opinion (emphasis added):

even if consumers in general may not much care what retailer supplies their contact lenses, the consumers relevant to this suit are looking for a particular retailer. Presumably they have narrowed their search because they have already selected 1-800 as the preferred retailer and are searching for its website or perhaps commentary on its performance. Given the purpose of the search, the shoppers will be attentive to click on those results that will connect them with sites relating to 1-800. In addition, once the consumers see the results page, the substantial dissimilarity between “1-800 Contacts” and “Lens.com” (or its other websites) can be expected to greatly reduce the chance that the consumers will think that the parties are related enterprises; the similarity of the search term and 1-800’s mark is of minor relevance.

Perhaps in the abstract, one who searches for a particular business with a strong mark and sees an entry on the results page will naturally infer that the entry is for that business. But that inference is an unnatural one when the entry is clearly labeled as an advertisement and clearly identifies the source, which has a name quite different from the business being searched for.

Kudos to the Tenth Circuit for recognizing that ad copy educates consumers and helps searchers improve their search process. Big demerits, however, for assuming that a search for “1-800 Contacts” signals that the searchers are, in fact, looking for 1-800 Contacts (or even information about it). This is demonstrably false, as the Hyman/Franklyn study showed and as I explained in 2005. The Network Automation opinion made this identical error. Why are appellate judges so tempted to assume searcher intent from the search keyword?

Although the court’s disposition of the initial interest confusion resolves the ads triggered by 1-800 Contact’s trademarks that don’t display the trademarks in the ad copy, there still remains the ads by Lens.com’s affiliate which contained the trademark in the ad copy. In a discussion that goes on way too long, the court ultimately rejects Lens.com’s vicarious trademark liability, an agency-based doctrine. This should have been an easy call because there’s absolutely no way affiliates mediated through Commission Junction are Lens.com’s agents. The court notes the possibility that Commission Junction was Lens.com’s agent and the affiliates were sub-agents. Give me a break. Still, the court says that the affiliate displaying the trademark in the ad copy acted outside the scope of any agency. The court says:

The issue is not whether McCoy had authority to act on Lens.com’s behalf at all, but merely whether he had actual authority to publish an ad displaying a variation of 1-800’s mark in its text….McCoy never believed, reasonably or otherwise, that Lens.com authorized him to place the ads. Thus, the subjective component of actual authority was absent.

Nice save of a completely faulty premise.

Nevertheless, the appellate court reopens the contributory infringement issue. The court is bothered by the fact that Lens.com waited 3 months between when it got 1-800 Contacts’ lawsuit and asked the Commission Junction affiliate (McCoy) to stop advertising with 1-800 Contacts’ trademark in the ad copy. The court says:

if Lens.com could have stopped the use of ads using 1-800’s mark by simply requiring CJ to send an email blast to its affiliates forbidding such use, then Lens.com’s failure to proceed in that manner after learning of such ads could constitute contributory infringement.….When modern technology enables one to communicate easily and effectively with an infringer without knowing the infringer’s specific identity, there is no reason for a rigid line requiring knowledge of that identity, so long as the remedy does not interfere with lawful conduct.

This standard doesn’t ensure a 1-800 Contacts jury win. It’s not clear to me that Lens.com could have fixed the problem just by sending an email. Still, even if Lens.com loses this portion of the case, this is a small fraction of the overall conduct 1-800 Contacts was complaining about. I believe the damages exposure for the remaining ads in question is relatively small. It would be more rational for the parties to settle up rather than spend the money to take this question to the jury, but nothing about this litigation has been rational to date, so I’d be surprised if rationality suddenly made an appearance now.

I must sound like a Johnny One Note, but I’ll say it again. Keyword advertising litigation is dead, dead, DEAD. It may not have been dead when 1-800 Contacts brought the lawsuit in 2007, but the intervening 6 years have proven that keyword advertising lawsuits are not easy to win and are economically irrational.

In this case, it’s been clear all along that 1-800 Contacts’ wasn’t suing because it wanted to protect its brand. Instead, its apparent motivation all along has been to shut down competitors, by draining them of cash if necessary. I’m sure both parties have spent well over $1M on this litigation–money that the incumbent (1-800 Contacts) can afford more easily than newer entrants (like Lens.com). Thus, it’s devastating to Lens.com that both courts have denied its attorneys’ fees. Given that 1-800 Contacts got a small victory on appeal, the fee denial is consistent with trademark law, but the consequence is that 1-800 Contacts can get away with lawfare for anti-competitive objectives.

And 1-800 Contact’s fear of competition has manifested itself in other ways, including similar suits against other competitors and repeated attempts to game its state legislature. Lens.com did bring an antitrust claim against 1-800 Contacts for this litigation; that case has been on hold awaiting this Tenth Circuit ruling. We’ll have to see if Lens.com now can make any headway to hold 1-800 Contacts accountable for its legal choices.

[UPDATE: Rebecca has some useful thoughts on the case, including on some points I omitted from this overlong post.]

Prior Blog Posts on This Case

* Just How Egregiously Must a Trademark Plaintiff Act Before a Court Awards Attorneys’ Fees to the Defendant?–1-800 Contacts v. Lens.com

* How Much Does 1-800 Contacts Hate Competitive Keyword Advertising? $1.1M Worth!?