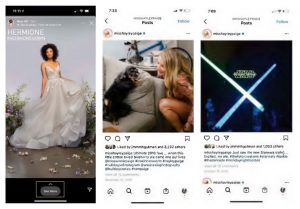 This is a case focusing on ownership of social media accounts. The dispute is between bridalwear designer Hayley Paige Gutman and JLM Couture, a bridalwear company. We blogged this case twice before. (See “Social Media Ownership Disputes Part II: Bridal Wear Company Takes Back Control of Instagram Account from Ex-Employee” and “Another Confused Entry in the Social Media Account Ownership Jurisprudence–JLM v. Gutman”.) Compared to most social media ownership disputes, this case has featured extensive litigation, including an appeal, revised injunction, a contempt motion, and now, a motion to modify the scope of the preliminary injunction. That, in part, reflects the comparatively unusual circumstance that Ms. Gutman had an employment agreement that included non-compete covenants and an assignment of name-rights to JLM.

The court discusses two social media accounts: Instagram.com/misshayleypaige and pinterest.com/misshayleypaige/_saved/. Gutman opened both accounts after she entered into the employment contract with JLM. While certain attributes of the accounts made it unclear as to whether they were personal or business-focused accounts, the evidence was clear that the accounts were used extensively by JLM or by Ms. Gutman in her role as an employee of JLM. JLM exerted significant control (or “influence”) over both accounts and in particular the Instagram account. The court is emphatic that the accounts “served as critical advertising platforms for JLM’s products affiliated with the Hailey Paige brands.” The court also found “Ms. Gutman and JLM employees worked together to strategize as to how best to leverage the social media platforms to market the HP brands.” JLM (and Gutman) also used the Instagram account to communicate with actual and potential customers of JLM. While it was true that the accounts were imbued with aspects of Ms. Gutman’s personality and personal life, these were part of the overall marketing strategy for JLM.

The district court initially punted on the ownership question. The Second Circuit also declined to address this issue when resolving the appeal from the preliminary injunction, finding that the injunction previously entered by the district court could be valid if tied to her contractual duties to assist JLM with its advertising. The contract term was set to expire in August 2022, and thus the injunction would be dissolved as well. JLM sought to extend the injunction on the basis that it was likely to succeed on the ownership and conversion questions. JLM’s argument was that if the court ultimately decided that it “owned” the accounts, then JLM would need some form of injunctive relief protecting its property interest in the social media accounts.

The court starts by noting that ownership of social media accounts is a novel question that only a few courts have addressed. The court relies on two decisions: (1) In re CTLI, a bankruptcy ruling from 2015 blogged here: “Company’s Social Media Accounts Transferred in Bankruptcy” and (2) Int’l Bhd. Teamsters Loc. 651 v. Philbeck. The court summarizes the considerations relied on by those courts as relevant to determining ownership of an employee social media account:

The court distills these down to three factors:

Here, the bulk of evidence supports JLM’s view that it owned the accounts in question.

The court says JLM has a clear likelihood of success in showing that it owned the accounts in question.

Ms. Gutman pointed to her own creative input into the account, but the court says that this is consistent with her being the point person for JLM in managing the account. The mixture of personal and professional content in the accounts was also consistent with Ms. Gutman’s vision for JLM’s marketing that it would be an extension of her personality.

She also pointed to anecdotal references by JLM employees to the accounts as Ms. Gutman’s “personal accounts,” but the court says these stray references are hardly determinative.

She also argued that the employment agreement did not contain any provisions regarding ownership, but the court falls back on the work-for-hire language in the agreement.

Finally, the court concludes that JLM has likely shown conversion by virtue of Gutman’s interference with JLM’s access and use of the account.

The court says loss of ongoing access to the social media accounts would cause irreparable harm: “JLM’s ability to control the content of the accounts is critical to maintaining the strong internet presence of [its] brands, . . . reputation, and the goodwill [it] has created among potential and actual customers who follow the accounts.”

The court is not very sympathetic to Ms. Gutman. Indeed, it has harsh words for her conduct vis-a-vis her intent and ability to honor her contractual obligations. One of the Second Circuit judges was much more sympathetic to Ms. Gutman, observing that depriving her from use of her name in bridal fashion endeavors would be unduly onerous. This judge’s sympathy along with the lack of a unanimous opinion in the Second Circuit makes me wonder whether Ms. Gutman will appeal.

The dispute is interesting in many ways–especially the fact that it’s been this heavily litigated. Perhaps the ongoing cycles of litigation have caused the parties to become invested in their respective positions and less interested in resolving the dispute. In any event, it’s surprising to see the parties so many resources on litigating over Instagram and Pinterest accounts.

The court’s fact-based inquiry to resolve the nature of the account is reminiscent of the Sixth Circuit’s recitation of factors in Lindke v. Freed. As Eric notes, the Sixth Circuit in Lindke ended up giving government actors a lot of leeway by asking “[whether the government actor operated the account:] (1) pursuant to his actual or apparent duties or (2) using his state authority.” In this case, the court seems to apply the factors more faithfully.

The court at one point cites to a case involving domain names in addition to social media accounts, in concluding that JLM has a property rights in the accounts. Still, the court acknowledges that its resolution while definitive is only as between the two parties (i.e., it still depends on whether “Ms. Gutman or the relevant platforms may hold title to the accounts”). It’s always worth keeping in mind in these cases that the accounts exist at the discretion of the platform.

This case differs significantly from the typical social media ownership dispute because of the existence of a written agreement and because of the assignment of name-rights to the employer. It’s unclear from the court’s ruling whether the conclusion depends on the existence of a written agreement. Of course, the court’s fact-based analysis is as strong an admonition as they come in favor of securing an agreement in writing regarding social media accounts.

A final note is that the opinion does not mention the laws restricting employer access to employee social media accounts or ownership of such accounts. Those laws were enacted by several states with a lot of fanfare, but they have seen little, if any, activity.

Linnea Orians: “More Than a Name: A New Era”