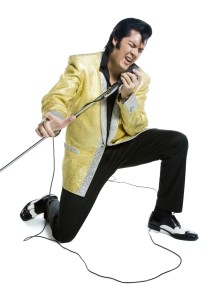 Alan Bailey/Shutterstock – An Elvis impersonator singing into a microphone

Plaintiff, while he was in custody, created a fake Twitter account in the name of “Frank Zamiara” with the user name “LitlZeezy”. The account “was meant to act as the voice and alter ego of [an] abusive deputy.” It was used ostensibly to alert the public to what the plaintiff and others felt was abusive conduct by a real life deputy named Michael Zamiara. Plaintiff sent letters to his girlfriend, who then posted the information as tweets from LitlZeezy. Jail officials were alerted (in September 2009) to plaintiff’s social media efforts in the course of screening his outgoing mail. As a result, he was placed in the special housing unit under “administrative segregation” for 22 days.

Monaghan, an ADA, was assigned to investigate possible criminal charges against plaintiff. He allegedly got the process started. Peglow, an investigator, filed a felony complaint charging plaintiff and his girlfriend with identity theft, criminal impersonation, and conspiracy. The complaint did not mention that the Twitter account was in the name of “Frank,” not “Michael,” Zamiara. The complaint generally alleged that the tweets made Zamiara out to be a racist and included numerous racially charged terms. Zamiara filed a supporting deposition in connection with the complaint. He alleged that the tweets were supposed to appear as if they were from him and that “someone . . . assumed [his] identity online.”

A lawyer for plaintiff moved to dismiss the criminal charges, and in response, Monaghan stated that the reference to “Frank” rather than “Michael” was a typo. Monaghan sought leave to amend on this basis. The criminal case did not move forward after this.

Later, in 2010, plaintiff appeared in court on unrelated criminal charges, and another ADA cited to the still-pending identity theft charges as justification for why plaintiff should be denied access to judicial diversion. ADA Monaghan eventually tried to secure an indictment on the identity theft charges, but the grand jury dismissed the charges.

Some years later, plaintiff, proceeding pro se, brought a slew of claims against the investigator, deputy, and the ADAs, Most were dismissed on the court’s initial screening of the complaint. What remained was plaintiff’s claim for malicious prosecution. The court finds it lacking.

The jail deputy (Zamiara) argued that he couldn’t be held liable because he did not “initiate” the prosecution, but the court disagrees. However, the court does say that the deputy is entitled to judgment on the pleadings because probable cause is a total defense to a claim for malicious prosecution.

The identity theft charge: The court says that probable cause existed as to the identity theft claim because plaintiff utilized an item of the deputy’s personal information (broadly defined under New York law to include a person’s name and place of employment) in the Twitter account. While plaintiff’s stated intent was to act as a whistleblower, the court says a reasonable person could have concluded plaintiff possessed an intent to defraud (i.e., cause loss to the Zamiara, who testified that the posts “[c]ould have caused him to lose over two thousand dollars in lost salary and benefits if his employers had believed the posts were made by him”).

The criminal impersonation charge: The court similarly says probable cause supported the charge of criminal impersonation. The statute broadly defines impersonation as “act[ing] in . . . [an] assumed character with intent to obtain a benefit or to injure or defraud another.” A separate part of the statute specifically references communications where someone “pretends to be a public servant in order to induce another to submit to such authority or act in reliance on such pretense.”

The conspiracy charge: Probable cause was satisfied as to the conspiracy claim because plaintiff worked with his girlfriend to set up the Twitter account.

Ugh. A thin-skinned public official who overreacts to at best a parody social media account, and at worst a means of blowing the whistle on bad conduct. We’ve seen similar examples of such overreactions before. (See, e.g., Matot v. CH; Perez v. Tedford.) And here, it looks like the plaintiff suffered some serious consequences as a result.

Identity theft and criminal impersonation statutes are incredibly overbroad. There’s no way a parody account should satisfy the elements, but we’ve seen attempts to shoehorn such activity into these types of statutes before. And the court here, bending over backwards to give defendants the benefit of the doubt, says it’s possible the plaintiff’s actions constituted identity theft and criminal impersonation.

The court had a couple of opportunities to appoint a lawyer for the plaintiff, who was proceeding pro se, and declined. I’m not sure how much of a difference it would have made but it was disappointing to see the court not take the opportunity to appoint counsel. This looked like a colorable case, and one where the court could have benefited from having a well-developed presentation on the plaintiff’s side.

Eric’s comment: As Venkat indicates, this case has important parallels to In re Rolando S, where a high schooler was convicted of identity theft for logging into a classmate’s Facebook account and posting inappropriate sexual content in her name. The identity theft elements were stretched in that case, but this court’s stretching is even more problematic because of the parody Twitter account’s obvious political and advocacy functions. Indeed, an Illinois court invalidated parts of an identity theft statute because of its obvious overreach into ordinary online conduct. Identity theft can be a terrible crime, but legislatures and prosecutors need to tread extra carefully to make sure they are sanctioning only true identity theft, not a panoply of everyday online activities where pretending is involved. The prosecutors in this case weren’t nearly so careful, and they are really lucky they found a sympathetic judge.