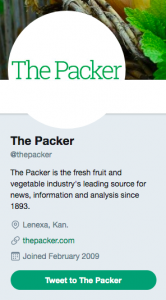 This is another ownership dispute over a Twitter account. We last blogged this topic several years ago, and none of the disputes we’ve seen have resulted in any definitive rulings.

Plaintiff publishes trade publications in the agricultural sector, including “The Packer” and “Produce Retailer”.  Defendant Gregory Johnson served as editorial director for these publications. He left to join the “Produce Blue Book” as its new “Director of Media Development.” The Produce Blue Book competes with the plaintiff’s titles. Before his last day, Johnson changed his Twitter account handle from @gregofthepacker to @gregofthebluebook. He’s also allegedly downloaded some 11,000 files from plaintiff’s network to his personal Dropbox account.

Plaintiff sued, asserting claims based on misappropriation of the trade secrets and alleged conversion of the twitter account.

The court rejects the challenge to the trade secrets claims. Johnson argued that his employment agreement did not have a survival clause, so he could treat any confidential information as non-confidential upon termination of his employment, but the court rejects this argument. Among other things, the alleged download of files occurred while Johnson was still technically employed by plaintiff. The court also finds that the allegations adequately amount to a breach of the duty of loyalty.

The court also finds that plaintiff states a claim for conversion of the Twitter account. Plaintiff alleges that it owns the account, it is the only one entitled to use it, and defendants interfered with plaintiff’s ability to use the account. This is sufficient. As to Johnson’s new employer, the court says that plaintiff need not allege that new employer actually stole the account; it’s sufficient to state that the new employer used the property (the account) and refused to give it up. The same facts support a replevin claim.

Finally, the court also refuses to dismiss the claims for unfair competition and conspiracy. The unfair competition claim is supported in part by the allegation of unauthorized use of plaintiff’s Twitter account and confusion regarding possible affiliation between the Blue Book and Plaintiff. This last conclusion seems flimsy, given that it’s based on content that remains linked through the former The Packer account which is now publicly affiliated with The Blue Book, but the court doesn’t delve into the details.

Dropbox and similar services should really have a prominent warning that asks departing employees whether on the eve of their departure they really want to copy thousands of files from their employer’s network to their personal devices:

ARE YOU SURE you want to create a bullet-proof record of a breach of confidentiality claim for your employer that they can use if they decide to sue you?!?! Disclaimer: we cannot provide you with legal advice, but this seems like a bad idea.

It appears that the employment agreement between Johnson and plaintiff actually mentioned the Twitter account, but surprisingly it did not actually say that plaintiff owned all of the content and the account itself. The agreement could have also said that, upon termination of employment, the employee should turn over passwords to any official Twitter accounts (which would ideally be specified).

The account profile seems to be a mix of the employee’s and the employer’s name–similar to what you see with respect to many news stations. The court doesn’t talk about whether any personal content was posted by Johnson on the account, but that could of course complicate plaintiff’s effort to get the account back. Many states enacted social media privacy legislation restricting when employers could demand passwords from current or future employees. Washington passed one in 2013. Neither Kansas nor Missouri have such a law on the books. One of the main issues with such laws is the difficulty in defining what constitutes an employer account versus a personal one. The court’s order in this case doesn’t place the account in question clearly into one category or another, but my sense is that it’s a company-focused account.

Some plaintiffs have used trade secrets and confidential information as a way to argue that the social media account (and its followers) should remain with the employer. That seems like a way to shoehorn an argument into a context that does not cleanly fit, and the plaintiff does not take that route here.