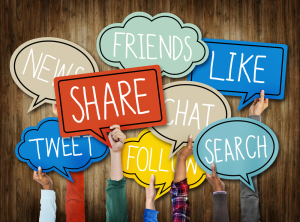 This case addresses whether social media accounts used in connection with a business become property of the bankruptcy estate.

The debtor, known as “Tactical Firearms,” was formed by Jeremy Alcede. Originally it was owned by Alcede and his then-wife, but it took on an investor in 2011. Dissension developed between the investor and Alcede. Following a derivative action and several defaults, Alcede caused the company to file a Chapter 11 petition. The main investor, Wilson, proposed a reorganization plan, which the court approved. One element of the plan required Alcede to turn over the passwords to any company social media accounts.

The court rejects his arguments on all counts:

Mr. Alcede’s emphasis on the “personal” character of the social media accounts is inconsistent with his emphasis, at prior hearings in this Chapter 11 case—when he was still in control of the Debtor—of the substantial amount of time he spent using these accounts for business purposes. For example, at one of the initial hearings in this case on the amount of salary Mr. Alcede should draw from the estate, Mr. Alcede testified that he answers “thousands” of Facebook Messages each day and stays up late commenting publicly on the Facebook Page. Mr. Alcede also described his activity on the Facebook and Twitter accounts as a significant business activity: “It’s just very important that I stay in tune with social media because that’s how people follow us and that’s how they support us and that’s how they hear about what we’re doing.” Mr. Alcede now attempts to distinguish Messages as an ancillary feature of Facebook, while upholding Posts as the core feature.(“The posts, which is the meat and potatoes and the gist of Facebook, are my personal, and that has never changed”). The Court finds no reason to accept Mr. Alcede’s arbitrary elevation of one Facebook feature over another, and finds that Mr. Alcede’s use of Facebook Messages to communicate with customers through the former Tactical Firearms Facebook Page, in addition to his clearly business-related posts, is strong evidence that the former Tactical Firearms Facebook Page is a business Page.

The court also rejected Alcede’s arbitrary split of personal versus business, embracing many a modern marketer’s advice that in the era of social media, it all flows together. Alcede points to a gun show tweet as an example of a personal tweet—i.e., one that didn’t advertise any products or services. The court says this is not the defining factor:

The very nature of social media dictates that its best use for business is somewhat more subtle than other forms of marketing. A Tweet advertising the fact that the owner of a gun store is at a gun show, far from being especially “personal” in nature, is a perfect example of this kind of subtle marketing. This Tweet most assuredly served to develop Mr. Alcede’s reputation as being a well informed, connected insider in the gun-buying community, a reputation that would attract consumers to the business of Tactical Firearms that he was running at the time he issued this Tweet.

In other words, the gun show tweet is an example of activity that develops thought leadership. Alcede often mixed in political tweets with his gun-related tweets; as part of his creative marketing campaign ran a marquee that fans could submit message to (the winner would receive a one year family gold range membership). Again, the court says that the political messaging are a “manifestation of [Alcede’s self-described] PR genius”.

The court does not lay out a definitive test for determining the character of the social media account (business or personal?), but a few things clearly influence the court’s decision: (1) the accounts were named after the business; (2) the accounts were linked to the business web-page; (3) Alcede granted an employee with access to post to one of the accounts; and (4) many of the posts promoted the business, or products or services offered by it.

What about Alcede’s interest in privacy or personal goodwill? Alcede also argued that to require him to turn over the pages would infringe on his privacy and misappropriate his goodwill. The court said this is insufficient to prevent turn over of control over the account to the company. An employee posting stray personal messages to a company account can be analogized to an employee who uses work to send personal messages once in awhile. Also analogizing to the client’s waiver of attorney-client privilege, the court says that Alcede waived whatever privacy he may have had in stuff posted to the business account.

The court likewise rejects any argument that requiring the accounts to be transferred somehow misappropriates Alcede’s personal goodwill. The court says that the page embodies his professional goodwill (if anything) and any such goodwill can follow a departed employee:

recognizing the business social media accounts as property of the reorganized Debtor does not deprive Mr. Alcede of any of this professional goodwill, if it indeed exists. The line of demarcation between professional and personal goodwill is precisely the line between goodwill that departs with the professional and goodwill that remains with the business. Therefore, Mr. Alcede is unimpeded in his ability to control whatever property interest he legitimately holds in the reorganized Debtor’s social media accounts. Whichever followers embody the goodwill that legitimately inheres in Mr. Alcede, as opposed to the corporate reorganized Debtor, are free to follow him to his own personal Facebook Page, entitled “Jeremy Alcede Patriot,” and to a personal Twitter account which he is free to reestablish with the title “Jeremy Alcede” and Handle “@jeremyalcede.” The extent of the loss of followers to the business accounts and subsequent gain in followers by Mr. Alcede will reflect the true extent of his personal interest in the accounts.

The scope of relief: Finally, the court also grapples with the appropriate remedies. It turns out Alcede renamed the “Tactical Firearms” page to “Jeremy Alcede Entrepreneur”. As the court notes, Facebook’s policies only allow the user to request this change once. The court also observes that Alcede had been posting content to the page that was disparaging or negative to the business. Accordingly, the court orders Alcede to turn over access to the page to the reorganized entity and cease posting such comments. While only Facbook can rename the page a second time, the court says that the reorganized debtor can pursue the issue with Facebook and if necessary, come back to court for relief.

Resolution of the issue is a bit simpler with respect to the Twitter account. The court says that Alcede needs to change the password and email to one he’s willing to share and then turn over this information to the reorganized debtor. (Prior to doing so, Alcede will likely change the name from his personal name to something else so he can re-establish another account with his personal name).

This is probably the most detailed look by a court at when a social media account is business or personal. As the court recognizes, often accounts are mixed. The court’s analysis gives (mostly common sensical) clues as to what indicia is likely to sway courts. Bankruptcy has raised interesting privacy and branding issues (domain names, trademarks, customer lists). Add this to the pile of foundational cases on this topic.

A few issues that were discussed implicitly but that were surprising to see the court not mention: (1) the effect of social media password laws; (2) the privacy in any personal messages Alcede may have sent or received through the accounts; and (3) whether forcing Alcede to turn over the passwords comports with Facebook’s and Twitter’s terms of services. The court’s waiver discussion ostensibly addresses the first two points, but it was nevertheless surprising to not see them expressed directly. As previously noted, social media privacy laws don’t offer specific guidance to resolving these types of issues.

Also, following the order, it looks like Alcede is going to take a firm stand, and will not be giving up his passwords quietly: “TEXAS MAN FACES JAIL AT HIGH NOON: REFUSES TO SURRENDER FACEBOOK PASSWORD TO BANKRUPTCY JUDGE” (Breitbart)

No Liability for Takedown Notice that Results in Termination of Facebook Page — Lown Cos. v. Piggy Paint