This is Part II of a review of recent social media ownership disputes. In Part I, I looked at how the Satanic Temple of Washington could not use the CFAA or ACPA to get its Facebook accounts back. Part II involves a bridal wear business’ (JLM Couture) successful reclaim of its Instagram and other social media accounts. In this case, a New York federal judge granted a preliminary injunction against the defendant, Hayley Paige Gutman, prohibiting her from interfering with plaintiff’s use of the account, which generally gave control over the account to JLM.

[Eric’s comment: if you’re like me and you have no idea who Hayley Paige Gutman is, this Cornell alumni magazine spotlight might help. Also, this Business Insider story provides a chronology of this high-profile and messy dispute, featuring an unfortunately public war of words.]

The big difference between the cases: JLM and Gutman had an agreement that addressed JLM’s right to use Gutman’s name. The agreement, which the parties entered into in 2011 (and which was extended at JLM’s option through 2022), also allowed JLM to register a range of trademarks using Ms. Gutman’s name, had solid work-for-hire language, and included a non-compete. The court’s opening paragraph of the findings of fact tells you how this is likely to go:

In the Contract, Ms. Gutman agreed, inter alia, to perform certain duties and granted Plaintiff certain exclusive rights to use and trademark the name “Hayley Paige” and variations thereof. . . . Ms. Gutman also granted Plaintiff “the exclusive world-wide right and license to use her name ‘Hayley’, ‘Paige’, ‘Hayley Paige Gutman’, ‘Hayley Gutman’, ‘Hayley Paige’ or any derivative thereof ([defined] collectively [as] the ‘Designer’s Name’)” for certain purposes during the stated term of the Contract and for two years thereafter. . . .  Explicitly in exchange “for the assignment to the Company of the Designer’s Name and the Trademarks,” JLM agreed to pay Ms. Gutman as consideration, in addition to her base pay and additional sales volume-related compensation, and for ten years following the termination of her employment with the company, a further percentage of “net revenues derived from the sale of goods under the Designer’s Name and Trademarks based on the Designer’s [N]ame.” . . .  The parties engaged in “rounds of negotiations” over the terms of the Contract, during which Ms. Gutman referenced a “Kenneth Pool example” and asked to “add perpetuity language.” . . .  Ms. Gutman represented to Plaintiff during the negotiations that she had an attorney review the Contract during the negotiations, a statement she now claims was untrue. . . . 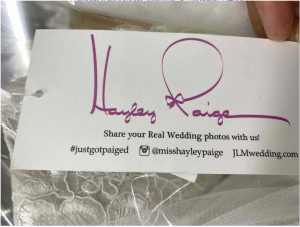 Ms. Gutman had a Facebook page prior to joining JLM, and she opened an Instagram page after she signed the agreement. She testified that since “Hailey Paige” was taken, she went with “@misshayleypaige”. She used the account to post both personal and professional items, but she involved JLM in many aspects of managing the account. She sought JLM’s help and proposed hiring the Social Media Director to oversee the Instagram account. The court cites several examples where she discusses JLM’s posts to the account. JLM also used the account in its off-line marketing efforts, such as including the account handle on “hang tags” of physical garments. In other words, things were very intertwined in terms of JLM’s use of an Instagram account bearing Ms. Gutman, an employee’s, name. (It appears that Ms. Gutman was also working with JLM on a wedding-focused “emoji app,” although this was not directly relevant in the preliminary injunction ruling.)

Separately, while she continued to work with JLM, Ms. Gutman also entered into so-called “influencer” agreements with non-bridal wear brands such as Chosen Foods (a salad dressing company) and Optimum Whey (a supplement). The latter arrangement was not directly with the brand but was through her then-fiancé.

The employment contract could be extended by JLM and could only be terminated by JLM. In 2019, JLM extended the contract and the parties engaged in unsuccessful negotiations regarding Ms. Gutman’s ongoing social media duties.

JLM sued in December 2020. The court issued a TRO requiring Ms. Gutman to turn over control of various accounts to JLM. Now before the court is JLM’s request for a preliminary injunction. It’s granted in large part.

factors one, two, three, five, and six weigh in favor of consumer confusion, factor four weighs against, and factors seven and eight are neutral. Ms. Gutman’s bad faith in using her trademarked name in commerce separate from her work for Plaintiff weighs particularly heavily in the Court’s balancing, given the evidence that she sought to exploit her work for Plaintiff while avoiding a direct contractual relationship with the Optimum Whey enterprise until after she had renegotiated the Contract. In assessing the totality of the likely impression on a consumer, the Court also notes that the “misshayleypaige” term has been used to identify the Account in connection with both Plaintiff’s goods and the third-party goods. The use of an identical mark on an Account where consumers had previously seen Plaintiff’s goods and also began to see promotion of third-party goods, increases the likelihood of confusion as to affiliation should Ms. Gutman be able to continue to use the handle and Designer’s Name in commercial activities on social media. Accordingly, the Court finds that consumer confusion is likely to result from Ms. Gutman’s use of the Designer’s Name, its registered trademarks, or similar variations in commerce to promote other products or to promote Ms. Gutman herself as an influencer able to promote other vendors’ products.

Irreparable Harm: While contract cases do not typically involve irreparable harm, this case involves a trademark claim, and not giving JLM control over the account runs the risk of undermining JLM’s goodwill and marketing efforts (to which it has contributed significant resources). Additionally, the agreement in place between the parties says that a breach can result in irreparable harm, which is something courts can consider when determining whether to award injunctions in contract cases. Ultimately, the court decides, it’s a good case for injunctive relief (after considering the remaining preliminary injunction factors). [Eric’s note: a reminder that the Trademark Modernization Act reinstituted the rule that trademark violations create a rebuttable presumption of irreparable harm.]

This is a great case that covers a lot of ground. The docket is overflowing and worth digging into. The big takeaway of course is that there’s a written agreement between the litigants, which distinguishes this case from other social media ownership cases out there. The agreement isn’t necessarily perfect (no agreement is), but it does a nice job of protecting JLM’s rights. Unfortunately, the agreement appears to be filed under seal, although given the docket’s volume, I can’t say I combed through it carefully. In any event, the court liberally quotes from the agreement and it has many helpful provisions. It’s worth noting that the agreement does not expressly cover the social media accounts in question.

The trademark claim also differentiates this case. The fact that the brand in question is a person’s name complicates matters. There are special requirements for registrations of surnames but those did not come into play here. JLM obtained express rights to register the name and variations of it, which puts JLM in a good position vis a vis the social media accounts. Interestingly, the contract appears to allow JLM to own the marks in perpetuity, which raises the question of whether Ms. Gutman faces the practical risk of not being able to use her own name in future bridal wear-related endeavors. (Per the agreement, Ms. Gutman did receive some sort of portion of the revenues from the sales of products to which her name was attached.)

The non-compete was not central to JLM’s argument and thus the court did not scrutinize it carefully. Non-competes are increasingly subject to special restrictions. In 2020, the State of Washington passed legislation with limitations when and how non-competes can be enforced.

There are dueling experts who offer testimony on whether the account was a “mega influencer” account or something less. The court labels this a semantic dispute. Data regarding the financial arrangements regarding influencers don’t always make their way into court records, so from that standpoint it’s interesting to see experts weigh in on this. (It would be interesting to go back and see whether the non-bridal wear influencer posts complied with the FTC’s endorsement guidelines.)

The big question is what happens with the account going forward. Does Ms. Gutman have to assist in its operation, or does she have to just hand it off to JLM? Would the court allow her to post some sort of personal (or agreed-to) message to followers in the event she were to create a separate personal account?

Other coverage of the dispute:

Hayley Paige and Bridal Company Are at War Over Use of Her Name, Instagram Handle (The Fashion Law)

Part I: Social Media Ownership Disputes, Part I: the Satanic Temple of Washington Can’t Get Its Facebook Pages Back