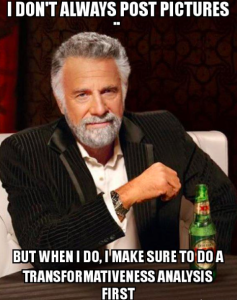 A producer of Defendants Fox News and Jeanine Pirro’s television show posted an image consisting of the 9-11 image juxtaposed with the iconic World War II photograph of Marines raising the flag at Iwo Jima. The image was posted to the Facebook page associated with “Justice With Judge Jeanine,” along with the “#neverforget” hashtag.

Defendants move for summary judgment on the basis of fair use. The court denies the motion.

This reminds me a bit of Morel. The defendant is an established media entity, with a producer that had received training on fair use (but not with respect to this image). Nevertheless, a single image sourced from the wrong place and used in the social stream creates a giant headache. Perhaps this just illustrates the “photos are different” rule in action. This type of ruling is perhaps the reason why bloggers and websites are well advised to never simply search for an image and use it in a post or article.

The factual context of defendants’ use here is worth noting: defendants were joining the conversation around 9/11 taking place on social media. They even used a hashtag! If this fleeting usage does not fall under fair use, it makes me wonder about those times in my own Twitter conversations when I respond to someone with an image or a meme.