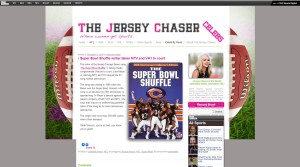 Danielle Wysocki blogged at “The Jersey Catcher,” a sports blog for women. On December 6, 2010, she blogged about a lawsuit over the 1985 novelty rap song “The Super Bowl Shuffle,” sung by members of the Chicago Bears football team.

(I’m reluctantly including a link to the video, but I recommend you watch it mostly to remind yourself how bad 80s pop culture could be. Especially note Tomczak’s head-shaking fake guitaring and Steve Fuller’s self-deprecating, uh, “rap.” Oh gawd, the whole thing is absolutely awful).

As is common for bloggers, alongside the post Wysocki included the cover image of the DVD at issue. The DVD cover (as well as the album cover) includes a group photo of the “rapping” Chicago Bears players (to me, it looks like many of them are doing “jazz hands”). The plaintiff claims a copyright in the photo and that Wysocki’s display of the DVD cover on her blog infringed the copyright.

If these allegations were true, it highlights the toxicity of photos used in commercial settings. In many circumstances, republication of a DVD cover or album cover should be excused by 17 USC 113(c) or possibly other doctrines. Still, shame on whoever used the plaintiff’s photo for the song and DVD without obtaining ownership or a strong enough license to protect downstream republications. Distributing a song that became a cultural icon with an insufficiently exhausted copyright license for its cover creates the potential for lots of other folks to become unintended potential defendants. The result is actually quite chilling to ordinary social discourse, as it makes sense that many people would want to show the album cover or DVD cover in discussing or critiquing the song.

Fortunately, the court rules that Wysocki made a fair use. The court jumbles up the fair use analysis but makes the following points:

* Nature of use: “Wysocki’s use of the photo to help explain the subject of her article is not the original use of the photo contemplated by Levey.” The court continued that Wysocki had engaged in news reporting because, “To a dispositive degree, the photo–due to its attachment to the DVD cover of the video at the center of the lawsuit–had become the news story itself.”
* Amount taken and Market effect: “Wysocki did not reproduce an original-quality copy of the photo, but instead used a copy of a copy that was already publicly available on the internet. There is no evidence in the record that the copy of the photo Wysocki published would have any effect on the market for Leveyfilm’s photo, so no reasonable juror could conclude that it did have such an effect.”

This rationale won’t always work for bloggers, but it does generally apply when bloggers want to show an artifact associated with a lawsuit.

The rest of the case is pretty interesting. The plaintiff tried to hold some Fox Sports entities liable for Wysocki’s republication. Fox owns a service called Yardbarker, which entered into a linking agreement with Wysocki where Yardbarker would link to selected blog entries and the blog would add Yardbarker’s frame to the top of its pages (see the screenshot above), and the parties would split resulting ad revenue. Yardbarker didn’t host any of the blog’s content (including the image at issue in this case), except for text excerpts included with the promotional links. Because it didn’t host the photo, the court dismisses Fox’s direct liability per Flava Works and Perfect 10 v. Amazon. The contributory liability claim fails because there wasn’t evidence that Yardbarker/Fox knew that Wysocki had infringed or was going to infringe. The vicarious liability claim failed because Yardbarker/Fox had insufficient control over Wysocki’s site; all they could do was terminate the linking agreement. Fox also escapes a 1202 claim because it didn’t distribute the photo or have the requisite scienter about the alleged CMI modifications.