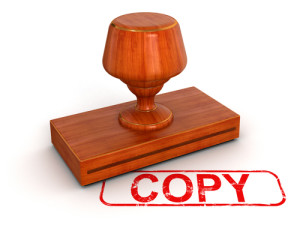 The plaintiff, JoAnne M. Denison, is an Illinois attorney and operated a blog, MaryGSykes.com. Denison blogged about a guardianship case she believed was marred by corruption. The Illinois attorney disciplinary board alleged that she made false statements on her blog that violated the Illinois rules of professional conduct.

Denison struck back with a copyright infringement lawsuit alleging the disciplinary board copied portions of the blog–more than was necessary–as part of its disciplinary proceeding. The court correctly says Denison’s allegations establish a prima facie case of copyright infringement, but this was an easy fair use case–easy enough to be granted on a motion to dismiss:

* Purpose/character of the use: “Copying portions of the Blog for evidence does not supersede the Blog’s purpose as a forum to discuss purported courtroom corruption. Moreover, it is uncontested that Defendants used the reproduction of these copyrighted materials in a judicial proceeding.”

* Nature of work: “the Blog is closer to a factual work or published speech than it is to a short story or unpublished memoir.”

* Amount/substantiality of portion taken: “Copying the entire Blog serves the important ‘societal interest in having evidence before the factfinder,'” and the board incorporated only 15 paragraphs in its publicly available filings.

* Market effect: “The use of the Blog as evidence in a state disciplinary proceeding does not create any adverse impact on any perceived market for the Blog.”

Along the way, the court recaps the strong precedent against Denison (cites omitted):

The House Committee on the Judiciary explicitly listed “reproduction of a work in legislative or judicial proceedings or reports” as an example of a fair use. In addition, the Seventh Circuit has noted that reproducing copyrighted works for litigation is an example of the fair use doctrine…Other courts have also held that the use of copyrighted material in litigation constitutes a fair use.

Indeed, there is no other tenable outcome for a well-functioning society, though why Congress didn’t expressly address the situation in the statute is perplexing. Given the obviously defective claim, this looks like an excellent candidate for 17 USC 505 fee shift.

I see this case as supplementing the recent fair use rulings that it’s OK to maintain copies of academic articles cited in patent applications and it’s OK to republish litigation briefs in an electronic archive. As Venkat recently mentioned, “the fair use pendulum seems to be swinging in defendants’ favor.” Amen!