This is a fun case! Serrano was accused of murdering (in 1997) four people in central Florida. The trial attracted publicity, and his defense lawyer Mason fought the case in the court of public opinion as well as in court.

During a television interview, in the course of rebutting the prosecution’s theory, Mason opined that Serrano is unlikely to have committed the murders because his face was caught on a security camera in Atlanta both in the morning and the evening of the murders. 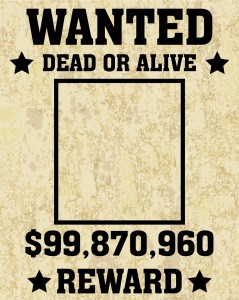 The prosecution’s theory was that Serrano was recorded on the security camera at the hotel the morning of the murders, he flew to Orlando where he drove to Bartow and committed the murders, then he drove to Tampa, boarded a flight to Atlanta and drove back to the hotel, where his face was again recorded on the security camera. During an interview, Mason doubted the prosecution’s theory, but also specifically took issue with the fact that someone could even land on a flight in Atlanta’s Hartsfield airport and make it to the hotel’s lobby in 28 minutes.  The particular exchange is worth quoting in full:

CHENEY MASON, ESQ.: Well, no, it’s not at the airport. It’s five miles away. You–how many times [have] you gone through the airport in Atlanta?

CHENEY MASON, ESQ: I mean you know you’re going to die there. You’re going to be born again and die at the Atlanta Airport. You have to go through Atlanta to go anywhere, right?

DENNIS MURPHY: What’s the old joke about going to Heaven.

CHENEY MASON, ESQ: Right. And–and so we know that when you land and–and–in Atlanta, depending on which concourse you’re landing in, you’re going to have to wait to get off the airplane. Even if you’re [in] first class. They usually put the thing behind you so you got to wait till half the plane gets off anyway. You got people boxed in–the lady with the kids in the carriage. Or people getting down their bags. Or the fat one can’t get down the aisle. [paging Mr. Marc Randazza ..]

I mean, whatever the story is, you’ve got delays in getting off the airplane. So if you’ve got a landing time, you don’t get off the airplane at that time. When–when have you ever gotten off an airplane in Atlanta in less than 10 minutes. It’s not going to happen. Then what? Then you have to go from whatever gate you are, down to the middle, to go down the el–the escalators, to catch the subway train to the terminal.

Wait for that. Wait while it stops in the meantime. People getting on and off. Get to that. Go up again, the escalators. Get to where you’re in the terminal, out the terminal to ground transportation. And from there to be on the videotape in 28 minutes. Not possible. Not possible. I challenge anybody to show me, and guess what? Did they bring in any evidence to say that somebody made that route, did so? State’s burden of proof. If they can do it, I’ll challenge ‘em. I’ll pay them a million dollars if they can do it.

An enterprising law student (Kolodziej) took Mason up on his challenge. He studied the transcript of the interview (which was edited) and the details of the case, and tried to reproduce the conditions in what he understood to be Mason’s “challenge”.  Kolodziej flew from Tampa to Atlanta on a flight that landed at 8:59. The flight arrived at the gate at 9:06, and Kolodziej raced through, arriving at the hotel by 9:25. He recorded the bulk of the trip using his iPhone and then promptly demanded payment from Mason and his law firm. Job prospects for law students may not be the best, but Kolodziej’s future was looking bright!

Not so fast. He initially filed a lawsuit in Texas that was dismissed for lack of personal jurisdiction. He then filed a lawsuit in Atlanta, and that lawsuit was transferred to Florida. (In between the two lawsuits, Kolodziej became aware that the interview was edited but proceeded anyway based on the theory that Mason ratified the edited version of the interview.) The judge in Florida grants Mason summary judgment, dismissing the case.

The court says that this could be a species of a unilateral contract, known as a “prove-me-wrong” agreement. It is a type of a reward case, except the offeror promises to pay money to someone who can prove him or her wrong. There have been several prominent examples of these types of agreements that courts have enforced, including one involving a boast “made on national television that the famous outlaw Jesse James had not been killed in 1882, as most people thought.” (Plaintiff demonstrated that James had been killed in 1882 and I guess formed a binding agreement?)

Kolodziej’s first big hurdle is that he never saw the unedited version until after he performed the challenge and thus he could not rely on this to form the terms of the offer. An offeree cannot accept the terms of an offer of which he or she was not ever aware!

His second hurdle is that in the unedited version, it is clear that Mason is not communicating a challenge to the public at large; his challenge is actually directed towards the prosecution (“Did they bring in any evidence to say that someone made that route, did so? State’s burden of proof. If they can do it, I’ll challenge them, I’ll pay them a million dollars if they can do it.”). The court says that the only reasonable interpretation is that Mason is referring to the prosecution when he issues the challenge.

Kolodziej also argued that behind-the-scenes banter from another lawyer referring to “the camera guys . . . leaving to go to [the airport’ to try to get the . . . . [reward]” was further evidence that his interpretation of the challenge was reasonable, but the court says where it’s possible the challenge could either be a joke or a serious offer, the right thing to do is to contact the offeror (i.e., Mason) and confirm whether the offer was serious or a joke. If anything, the joke undermined Kolodziej’s view that the offer was a serious offer.

This is vaguely reminiscent of the YouTube reward case, where the offer was enforced. (“A Reward Offer Still An Offer, Even if It’s Made on YouTube – Augstein v. Ryan Leslie.”) That case ended up going to trial and the jury awarded Augstein the full amount of the reward. Leslie appealed, but the appeal was recently dismissed due to a default on Leslie’s part. Of course, there’s a key difference between the two cases: (1) in Augstein, there was no “edited” version of the reward, and (2) Augstein involved a reward for something lost (a laptop), rather than a mere challenge. Still, Leslie argued that the reward offer should not have been taken seriously because it was posted to YouTube and that argument did not carry the day.

I guess the case ended up being a continuation of legal education for Kolodzeij. On the bright side, at least he did not act as his own counsel.

Other coverage: How a Lawyer Got Out of His $1 Million ‘Challenge’ on NBC’s ‘Dateline’

Related post: A Reward Offer Still An Offer, Even if It’s Made on YouTube – Augstein v. Ryan Leslie